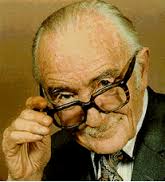 In this guest post, Iain Chalmers comments on a recent publication in which the authors claim that Cochrane’s 1972 book ‘Effectiveness and Efficiency’ was the inspiration for both the Cochrane Collaboration and the Evidence-Based Medicine movement, and that neither movement has paid sufficient attention to Cochrane’s reference to the importance of ‘care’ in health care.

The journal Medical Humanities has recently published an article entitled ‘Who cares? The lost legacy of Archie Cochrane’. It is co-authored by Askheim, Sandset and Engebretsen (2016), of the Institute of Health and Society and the Faculty of Humanities, University of Oslo, Norway. The authors believe they have contributed to “a more thorough reading” of Archie Cochrane’s book Effectiveness and Efficiency than has been done previously. In his book Cochrane had emphasized the need to assess ‘care’ as well as ‘cure’ when evaluating health services. As they believe that Cochrane’s book led to the Cochrane Collaboration and the Evidence-Based Medicine (EBM) movement, Askheim and colleagues take the Collaboration and EBM to task for paying insufficient attention to the need to assess ‘care’.

they appear to have taken a single document from the early 1970s and read it with 2016 eyes, ignoring the intervening four decades

Cochrane’s book was published nearly 45 years ago (Cochrane 1972). The analysis attempted by Askheim and colleagues is confused because they have not taken any account of Cochrane’s writings, including his autobiography (Cochrane 1989), between 1972 and his death in 1988. The authors might also have referred to material in the collection of essays published in 1997 to mark the 25th anniversary of the publication of Effectiveness and Efficiency (Maynard and Chalmers 1997). In brief, they appear to have taken a single document from the early 1970s and read it with 2016 eyes, ignoring the intervening four decades. 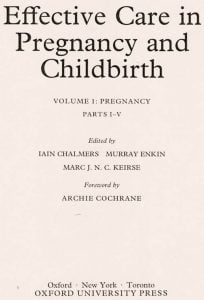 Had Askheim and colleagues consulted other sources published after 1972 they would have realised that, although the Cochrane Collaboration and Evidence-Based Medicine (EBM) have chronologically parallel histories, their origins and histories are distinct, and neither flowed directly from Effectiveness and Efficiency. The history of the Cochrane Collaboration did not start with Cochrane’s 1972 book, but rather with a very specific criticism and challenge issued by Cochrane in 1979, namely: “It is surely a great criticism of our profession that we have not organised a critical summary, by speciality and subspeciality, adapted periodically, of all randomised controlled trials” (Cochrane 1979).

Cochrane’s challenge was taken up initially by people involved in care during pregnancy and childbirth, which Cochrane had dubbed the least scientifically-based speciality within medicine. The year before he died he expressed his approval of this work (Cochrane 1987). In the Foreword published in the report of the project he wrote: “The systematic review of the randomized trials of obstetric practice that is presented in this book is a new achievement. It represents a real milestone in the history of randomized trials and in the evaluation of care, and I hope it will be widely copied by other medical specialties.” It was this ‘pilot experience’ that led to the creation of the first Cochrane Centre in 1992 (Chalmers et al. 1992), and to the Cochrane Collaboration the following year (Chalmers 1993).

“It is surely a great criticism of our profession that we have not organised a critical summary, by speciality and subspeciality, adapted periodically, of all randomised controlled trials” (Cochrane 1979)

Instead of drawing on these published sources to find out how Cochrane’s thinking evolved between 1972 and 1988, and to understand how, specifically, the Cochrane Collaboration responded to this, Askheim and colleagues unaccountably chose to take the writings of a literary theorist as the guide for their analysis. As a consequence, their reading of Cochrane has been less thorough than they had imagined, and their analysis inevitably muddled.

Just as Effectiveness and Efficiency was not the inspiration of the Cochrane Collaboration, so also was it not the inspiration for the ‘Evidence-Based Medicine’ movement. The EBM movement was inspired and led in the early 1990s by the writings and influence of David Sackett, Brian Haynes, Peter Tugwell, Gordon Guyatt and others at McMaster University. As someone who left clinical care in 1973 I have never felt qualified to write or speak about EBM, so I will leave it to those who have been integral to that history to comment on other misrepresentations in the article by Askheim and colleagues. The authors could have avoided some of their misunderstandings by interviewing some of the several people in Oslo who have contributed to one or both of these histories.

Askheim and colleagues claim that “care, which is harder to capture statistically, using purely quantitative techniques of epidemiology, is placed on the margins of what medicine is.” If they are seriously concerned about this, I urge them to look more carefully at efforts made both within the Cochrane Collaboration and in EBM to evaluate and improve care, using both qualitative and quantitative methods; and then to offer practical advice and illustrations of how these efforts might be improved.

I am grateful to Andy Oxman and Mike Clarke for helpful comments on an earlier draft.

An incomplete and misleading reading of Archie Cochrane by Iain Chalmers