In this blog, dementia care practitioner and researcher Bob Woods talks about reminiscence therapy and the evidence which he and his colleagues brought together in their recent Cochrane Review. 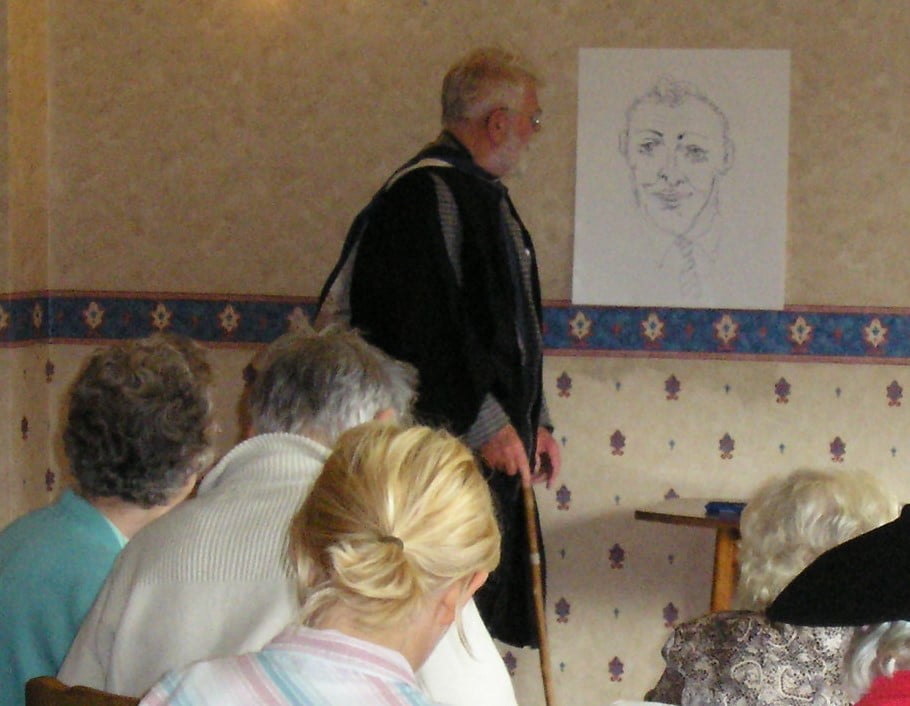 ‘Brian’ inspects the sketches, all faces, pinned to the wall, making an encouraging comment about each: ‘That really captures the person’s character….whoever drew that one has a good sense of humour..’ He is wearing his teacher’s gown, and today he is again the art teacher, despite having retired 20 odd years ago and living with a diagnosis of dementia. He is taking part in a reminiscence group, and the ‘students’ are other people with dementia, carers and volunteers. He is taking his turn enacting and sharing something of his past life and for these few minutes at least he is active, engaged, smiling and interacting. 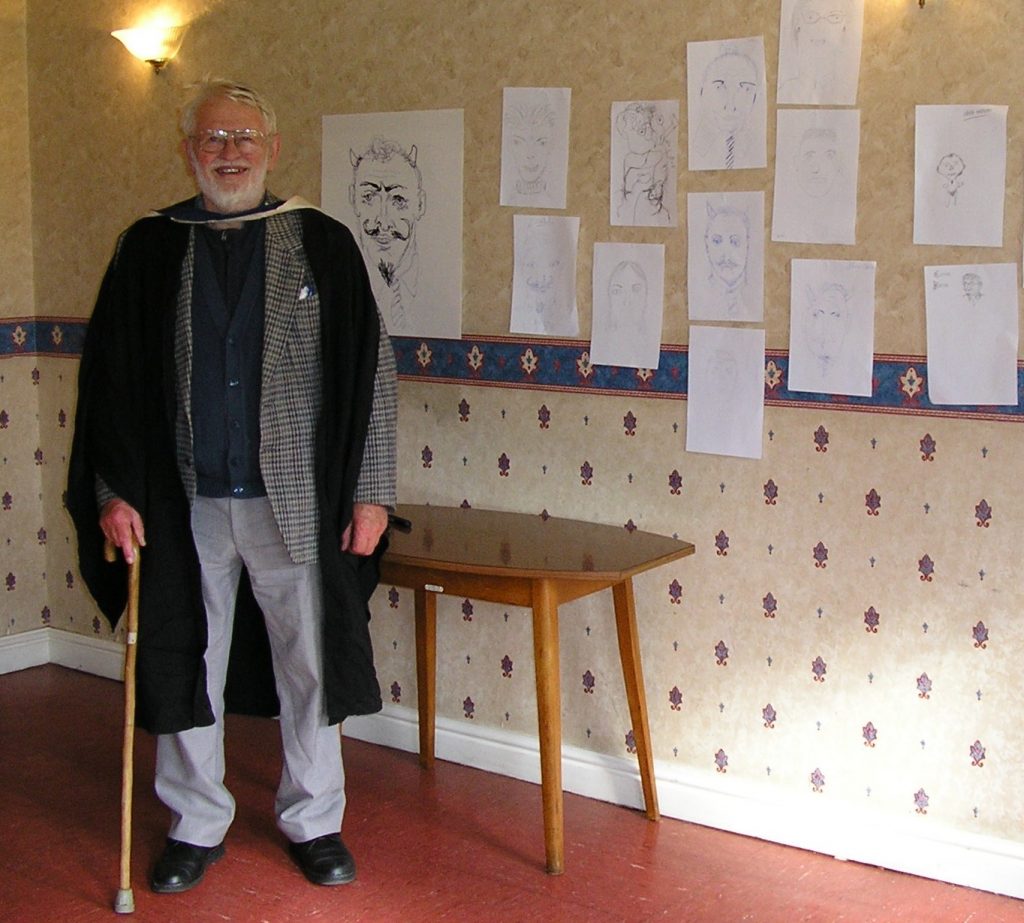 Evident pleasure as ‘Brian’ is in front of the ‘class’ again. Bangor reminiscence project, J. Woods.

In a corner of a care home lounge, ‘Vera’ is showing a young care-worker her life story book, with pictures and text she has chosen to communicate to others important people, events and places in her life. Vera is animated as she tells a story about her childhood, triggered by a treasured photo of a trip to the seaside, 80 years ago, but the memory as vivid as the photo is faded. Vera is also living with dementia and would struggle, if asked, to recall the name of the care home or the day of the week.

Both these activities would be described as ‘reminiscence therapy’: the discussion of memories and past experiences with other people using tangible prompts such as photographs or music to evoke memories and stimulate conversation. For many years, researchers in the field of dementia care have sought to identify and evaluate the effects of such approaches, which have become very popular in many care settings. We published the first Cochrane Review on the topic in 1998, but even when we prepared an up-date in 2005 the few studies available were of generally low quality and, whilst there were some promising indications, we could not draw any firm conclusions.

By March 2018, when the latest Cochrane review on reminiscence therapy for dementia1was published, there had been a step change in the quantity and quality of research studies available. We were able to include 16 well-conducted studies in our analyses, involving a total of 1,749 people with dementia. We anticipated that the effects of reminiscence therapy might be seen on measures of quality of life, interaction and communication and on mood, as well as on cognitive function. Where family carers were involved, we considered the quality of relationship between person with dementia and carer could be influenced, and that carer stress might be reduced.

Across the 16 studies, the combined results failed to show any consistent benefit associated with reminiscence therapy on quality of life, but there was a small effect on performance on cognitive tests. For those studies reporting scores on the widely used Mini Mental State Exam (MMSE), the benefit was roughly equivalent to preventing 6 months decline in cognitive function in the average person with dementia.

At first sight, this is a disappointing result. Whilst the change in scores on simple tests of orientation and memory may indicate increased alertness and engagement, without an accompanying improvement in mood or quality of life or social interaction it is difficult to argue that reminiscence is making a real difference to the life of the person with dementia. We had though planned to explore whether different types of reminiscence work had different effects, contrasting the group and individual approaches briefly exemplified by Brian and Vera previously. We also were able to examine whether the effects were different for those living in care homes, compared with those living in the community.

The most striking finding was that care home residents did show a small improvement in quality of life, alongside enhanced performance on cognitive tests, whereas this was not evident in people with dementia taking part in reminiscence activities in community settings. Individual reminiscence was probably associated with a small benefit on measures of depressed mood, and on cognitive performance. On the other hand, group reminiscence and community residence were probably associated with improved communication and interaction.

We found no evidence that reminiscence therapy, group or individual, in care homes or in the community makes a difference to other outcomesOutcomes are measures of health (for example quality of life, pain, blood sugar levels) that can be used to assess the effectiveness and safety of a treatment or other intervention (for example a drug, surgery, or exercise). In research, the outcomes considered most important are ‘primary outcomes’ and those considered less important are ‘secondary outcomes’., such as agitation, ability to carry out daily activities or relationships with other people. No benefits for family carers were identified, despite several studies seeking to include family carers alongside their relatives with dementia in joint reminiscence groups. We found no evidence of harmful effects of reminiscence for the people with dementia themselves, but there was a suggestion of slightly increased anxiety in family carers attending joint reminiscence groups. 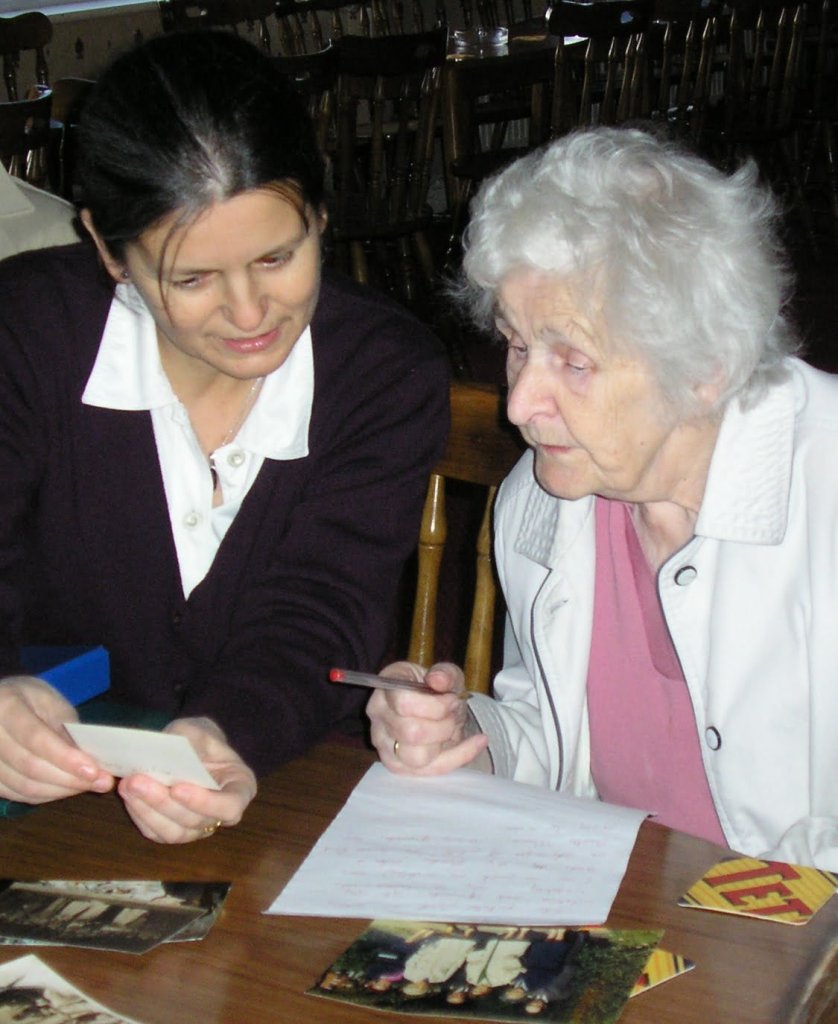 The effects of reminiscence vary

We concluded from these results that the effects of reminiscence vary, depending on the way it is given and whether it takes place in care homes or the community. It’s not surprising, perhaps that the group approach especially benefits communication and interaction, in view of its social setting. Individual work has typically involved the life story approach, and its focus on reviewing life as a whole, encouraging recall of positive memories as well as less happy times, may be particularly helpful for people with dementia with low mood related to recent losses.

Why were positive benefits most often seen in care home studies? A move to a care home is a potent threat to personal identity. The combination of memory loss and being removed from the familiar domestic and personal prompts and triggers which uphold personal identity in the person’s own home places the person in a difficult and puzzling situation. What am I doing here? Who are these other people? Where are my possessions? Where are my family? Reminiscence work – especially when reinforced with a life story book – has the potential to help the person to maintain personal identity in these challenging circumstances. An alternative interpretation, might highlight the relative lack of activity and stimulation in a typical care home, compared with the busy lives of people living with dementia in the community (or at least of many of those who take part in research studies). In such a context, the person’s focus may be on memories from the past, whereas the community resident may have more present activity to enjoy and future plans to make. Reminiscence then fits better with the care home resident’s situation, but be seen as less relevant by those living at home. This is summed up in a memorable phrase: “Remote events may be more often researched and rehearsed in memory as the theatre of the mind becomes the only show in town’2.

This suggestion that reminiscence may not suit all those living with dementia is evidenced in two large community studies, involving joint reminiscence groups of people with dementia and their family carers. In one3, a quarter of participants attended 3 or less of the 12 sessions, and in the other4, 42% did not even attend one session. This was despite participants signing up to research studies involving reminiscence groups. There were many different reasons for non-attendance, including practical and logistic reasons, as well as reluctance to attend groups, and carers finding it difficult to accompany the person with dementia, but clearly for a significant number of these community residents, reminiscence was not an attractive option.

Many of those who regularly lead reminiscence groups have been surprised by the inconsistent nature of the benefits identified in our review. They report the evident enjoyment and pleasure of participants, their animation and interaction. There is the suggestion that measures of quality of life and mood completed before and after a course of group sessions are not sensitive enough to pick up these within-session benefits. This is a valid argument, and there is a need to develop methods and research designs that can evaluate ‘in the moment’ enjoyment.  We need to be clearer as to our expectations of these approaches, and assess their effects accordingly.

Although it is not a clear-cut finding, the suggestion that carers may find involvement in reminiscence activities with the person with dementia stressful at times is worth considering further.  There may be many factors involved. These could include simply the effort of helping the person get ready and transport them to the session; or sadness at seeing the person respond well in the group and return to ‘normal’ back home; or seeing other more impaired people attending the group, and worrying what the future may hold. Even in individual life story work, there may be significant parts of the person’s life the carer was not involved in, and these may cause a barrier for some. Certainly, if we hope to use reminiscence as a tool to improve relationships, we need to be more mindful of the complexities involved and not expect reminiscence to act as a magic bullet.

Postscript: On June 20th 2018 the NICE Guideline: “Dementia: assessment, management and support for people living with dementia and their carers” was published. Despite the inconsistent findings in our Cochrane review the guideline recommends that group reminiscence therapy be considered for people living with mild to moderate dementia. No recommendation is made concerning individual reminiscence therapy.

Dr. Woods reports grants from Book of You (social enterprise), grants from National Institute for Health Research, grants from Health & Care Research Wales,  during the conduct of the studyAn investigation of a healthcare problem. There are different types of studies used to answer research questions, for example randomised controlled trials or observational studies..

Bob Woods has been a practitioner and researcher in the dementia care field in the UK for over 40 years. He trained and worked initially as a clinical psychologist in Newcastle-upon-Tyne, subsequently combining extensive clinical work with older people with academic appointments at the Institute of Psychiatry, London and University College London. From 1996 to his retirement in 2017, he was Professor of Clinical Psychology of Older People at Bangor University, Wales where he was Director of the Dementia Services Development Centre Wales. His research has involved the systematic development of evidence-based psychosocial interventions for people with dementia and their care-givers.

Do memories matter? Is reminiscence over-rated as a therapy for people with dementia? by Bob Woods