In this blog for our ‘Evidence for Nursing’ series, Sarah Chapman revisits Cochrane evidenceCochrane Reviews are systematic reviews. In systematic reviews we search for and summarize studies that answer a specific research question (e.g. is paracetamol effective and safe for treating back pain?). The studies are identified, assessed, and summarized by using a systematic and predefined approach. They inform recommendations for healthcare and research. and NICE guidance, which was updated in August 2021, on care for infants and children hospitalised with bronchiolitis. 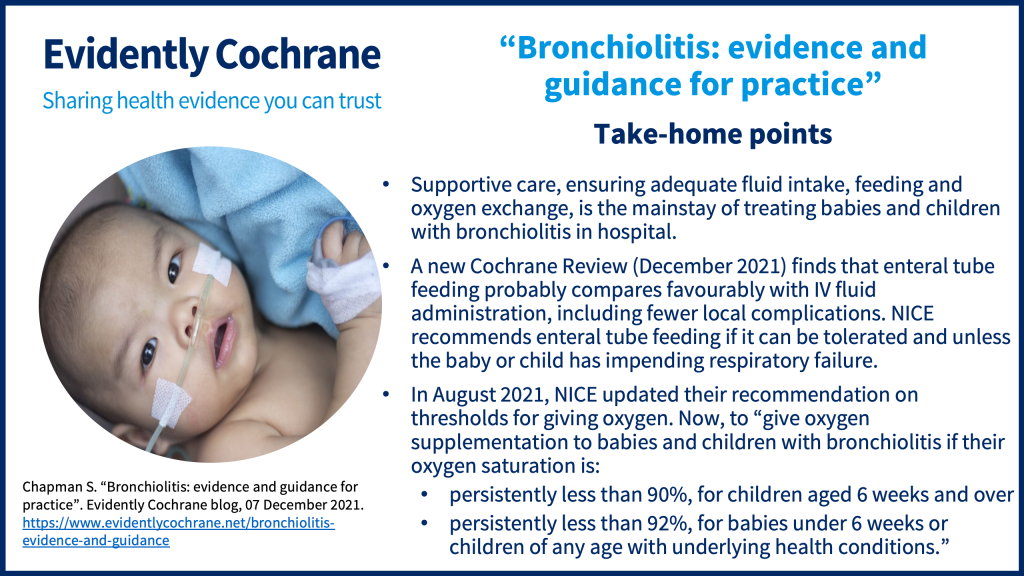 When I was nursing on a children’s ward here in Oxford, rather a long time ago, the winter months would see our largest bay perpetually filled with infants with bronchiolitis. Bronchiolitis is a very common respiratory condition affecting children under two years old, peaking at between three and six months of age. ‘Bronc season’ was inevitably an extra busy time, and it was horrible to see these little ones struggling to breathe and feed.

Respiratory syncytial virus (RSV) is the most common causative organism. Although it tends to resolve by itself within a week, bronchiolitis is the leading cause of medical emergencies in children younger than two during winter. While symptoms generally peak at three to five days, the acuteA health condition (or episodes of a health condition) that comes on quickly and is short-lived. phase can last up to three weeks, and about 10% of children will continue to cough and wheeze long after that, sometimes even needing a second hospital admission.

Supportive care, ensuring adequate fluid intake, feeding and oxygen exchange, is the mainstay of treating infants and children with bronchiolitis, but there are variations in practice and a lack of consensus about management. A Lancet seminar  Bronchiolitis (July 2022) notes that “Management recommendations, based predominantly on high-quality evidence, advise clinicians to support hydration and oxygenation only… Despite systematic reviewsIn systematic reviews we search for and summarize studies that answer a specific research question (e.g. is paracetamol effective and safe for treating back pain?). The studies are identified, assessed, and summarized by using a systematic and predefined approach. They inform recommendations for healthcare and research. and international clinical practice guidelines promoting supportive rather than interventional therapy, universal de-implementation of interventional care in bronchiolitis has not occurred and remains a major challenge.”

In its guideline Bronchiolitis in children: diagnosis and management [NG9] NICE states: “Give fluids by nasogastric or orogastric tube in babies and children with bronchiolitis if they cannot take enough fluid by mouth” and to “give intravenous isotonic fluids to babies and children who do not tolerate nasogastric or orogastric fluids or have impending respiratory failure”.

A new Cochrane Review Parenteral versus enteral fluid therapy for children hospitalised with bronchiolitis (December 2021) finds nothing to challenge this. With evidence from two studies, with fewer than 1000 hospitalised infants, this review highlights the need for an expanded evidence-base. As things stand, the authors find that enteral tube feeding probably reduces local complications compared with IV fluid administration. They also found that there was probably a higher rateThe speed or frequency of occurrence of an event, usually expressed with respect to time. For instance, a mortality rate might be the number of deaths per year, per 100,000 people. of success in inserting a feeding tube on first try compared to an intravenous catheter, and probably a lower rate of switching method of fluid delivery.

Oxygen supplementation is a fundamental element of supportive care for infants hospitalised with bronchiolitis. In the 2021 update to the guideline, NICE has changed its recommendation on the threshold for giving oxygen when oxygen saturations:

“Give oxygen supplementation to babies and children with bronchiolitis if their oxygen saturation is:

Delivering humidified oxygen through high-flow nasal cannulae is an alternative to standard supplemental oxygen delivery and it’s an approach that needs a better evidence base. Back in 2014 the Cochrane ReviewCochrane Reviews are systematic reviews. In systematic reviews we search for and summarize studies that answer a specific research question (e.g. is paracetamol effective and safe for treating back pain?). The studies are identified, assessed, and summarized by using a systematic and predefined approach. They inform recommendations for healthcare and research. High-flow nasal cannula therapy for infants with bronchiolitis found insufficient evidence to guide practice and NICE has flagged it as an area that warrants exploration in a large, multicentre randomised trialA trial in which the people taking part are randomly divided into groups. A group (the intervention group) is given the intervention being tested (for example a drug, surgery, or exercise) and compared with a group which does not receive the intervention (the control group)..

The Cochrane Review Continuous positive airway pressure (CPAP) for acute bronchiolitis in children (January 2019) highlights continued uncertainty on this approach, as they found only low-certainty evidence from three studies with just 122 infants (and found one ongoing studyAn investigation of a healthcare problem. There are different types of studies used to answer research questions, for example randomised controlled trials or observational studies.). NICE recommends that CPAP should be considered for children with bronchiolitis who have impending respiratory failure.

Not to be used

Hypertonic saline is listed in the NICE guideline as one of the treatments that should not be used. It will be interesting to see whether future research finds this to be a useful treatmentSomething done with the aim of improving health or relieving suffering. For example, medicines, surgery, psychological and physical therapies, diet and exercise changes., as the Cochrane Review Nebulised hypertonic saline solution for acute bronchiolitis in infants (December 2017) found that it may modestly reduce the length of hospital stay and improve clinical severity scores.

NICE guidance states that chest physiotherapy should not be done on babies and children with bronchiolitis who do not have relevant comorbidities (for example spinal muscular atrophy, severe tracheomalacia). A Cochrane Review Chest physiotherapy for acute bronchiolitis in paediatric patients between 0 and 24 months old (February 2016) found high certainty evidence that forced expiratory techniques, compared with no physiotherapy, do not offer any benefit and may do harm (such as inducing vomiting and respiratory instability). The review authors highlight the need for more evidence on slow passive expiratory techniques, as the existing (low certainty) evidence suggests they may give some temporary relief in some children.

What else do we need to know about supportive care of babies and children with  bronchiolitis?

It’s clear that more evidence is needed in a number of areas. Upper airway suctioning is one of these and NICE lists this as a research priority, noting that it’s commonly done but that methods vary and there is no evidence on which approach, if any, is most effective, and how it compares with minimal handling.  Its recommendation for practice is not to do this routinely; to do it if a baby or child presents with apnoea and consider it for those who have respiratory distress or feeding difficulties because of upper airway secretions.

A new Cochrane Review Palivizumab for preventing severe respiratory syncytial virus (RSV) infection in children (November 2021) has high-certaintyThe certainty (or quality) of evidence is the extent to which we can be confident that what the research tells us about a particular treatment effect is likely to be accurate. Concerns about factors such as bias can reduce the certainty of the evidence. Evidence may be of high certainty; moderate certainty; low certainty or very-low certainty.  Cochrane has adopted the GRADE approach (Grading of Recommendations Assessment, Development and Evaluation) for assessing certainty (or quality) of evidence. Find out more here: https://training.cochrane.org/grade-approach evidence that giving palivizumab, a humanised monoclonal antibody, by intramuscular injection every month during five months in the infant’s first RSV season reduces hospitalisation due to RSV infection and reduces the number of wheezing days. It also probably results in a slight reduction in hospitalisation due to respiratory‐related illness and may result in a large reduction in RSV infections. The evidence suggests that it probably results in little to no difference in mortalitydeath or adverse events. The authors say these results may be applicable to children with a high riskA way of expressing the chance of an event taking place, expressed as the number of events divided by the total number of observations or people. It can be stated as ‘the chance of falling were one in four’ (1/4 = 25%). This measure is good no matter the incidence of events i.e. common or infrequent. of RSV infection due to co-morbidities.

You can see all our Evidence For Nursing series here, and follow @CochraneUK @SarahChapman30 #EvidenceForNursing on Twitter.

Bronchiolitis: evidence and guidance for practice by Sarah Chapman