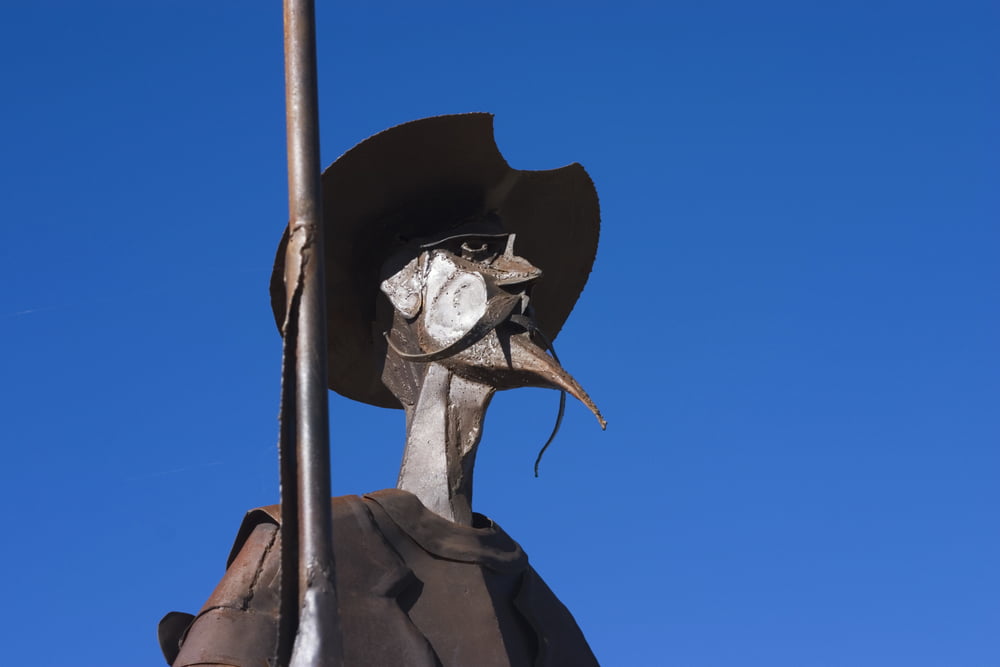 In this guest blog, retired GP Richard Lehman writes of of the dearth of evidence on treatments for delusional disorder and hopes there may be an abundance of kindness, as illustrated by Cervantes in his tale of Don Quixote.

The Oxford Lunatic Asylum opened in 1826, set in ten acres of fields and woods on Headington Hill among which the inmates could wander and look at the dreaming spires below. It was later renamed the Warneford Hospital, after a vicar who gave it generous endowments. When I was a medical student on a psychiatric attachment there over 40 years ago, it still had a slightly informal, family feel about it. “We get more Firsts than any other college in Oxford” was one of its boasts. A notable recent inmate had been a genteel, immaculately dressed college don who wrote a 40-page letter of appeal to the governors, signed “Edward IX, R.” The governors decided to keep King Edward IX in their relaxed confinement. 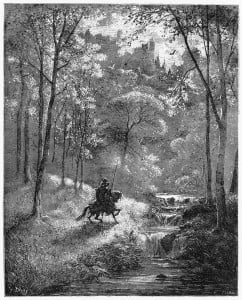 Picture from The History of Don Quixote book, published in 1880, London – UK. Drawings by Gustave Dore.

When I read the Cochrane Review of Treatments for Delusional Disorder last year, I remembered the King, and also Don Quixote, the most famous literary example of delusional disorder. In Cervantes’ books, the self-proclaimed Knight of the Sad Countenance is an unmarried eccentric of middle age in a small Spanish town. He has read so many books about deeds of chivalry that he becomes convinced that he is in a knight errant, bound to the service of his imaginary girlfriend Dulcinea. In the first book, he performs the mad deeds for which he is best known, such as attacking a windmill and slaughtering a flock of sheep in the belief that they are an army of the enemy.

The second book finds Quixote as deluded as ever, but Cervantes portrays him as now famous for his deeds in Book 1, meaning that he is often recognized on his quests. A kind Duke and his fondly mischievous wife give him lavish hospitality and contrive situations to bring out his valour for their amusement, but to their surprise find that he is also a wise, learned and loveable man. They begin to wonder if it is right to tease him and set him up. A priest and a scholar debate the point, and decide that he is indeed mad, but in one delusion only, and that there is no point in sending him to a doctor because there is no cure for such madness. It is better to just to keep humouring him and show kindness. And so the fun goes on, until Quixote grows ill and dies peacefully, half-cured of his folly at the end.

Despite writing what is perhaps the best-loved novel in history, Cervantes died a pauper a few years later and his remains were discovered only last March, not long before the Cochrane Review was published. Why have I left so little space to discuss this review on a fascinating subject? Unfortunately because it is nearly empty. The reviewers identified just one trial on the treatment of delusional disorder which met Cochrane inclusion criteria, and their conclusion states that “There is currently insufficient evidence to make evidence-based recommendations for treatments of any type for people with delusional disorder… Until such evidence is found, the treatment of delusional disorders will most likely include those that are considered effective for other psychotic disorders and mental health problems.” In among the high jinks and ridicule of Cervantes’ deluded Don Quixote, we also see the role of kindness and social acceptance in early seventeenth century Spain. I hope these can still be found in early twenty-first century Britain, because this review doesn’t give me confidence that we have any better science to help the Don Quixotes and King Edwards of our time.

Don Quixote and Edward IX: delusions and kindness by Richard Lehman is licensed under a Creative Commons Attribution-NoDerivatives 4.0 International License.
Based on a work at http://onlinelibrary.wiley.com/doi/10.1002/14651858.CD009785.pub2/abstract.

Images have been purchased from istock.com for Evidently Cochrane and are not available for reproduction.