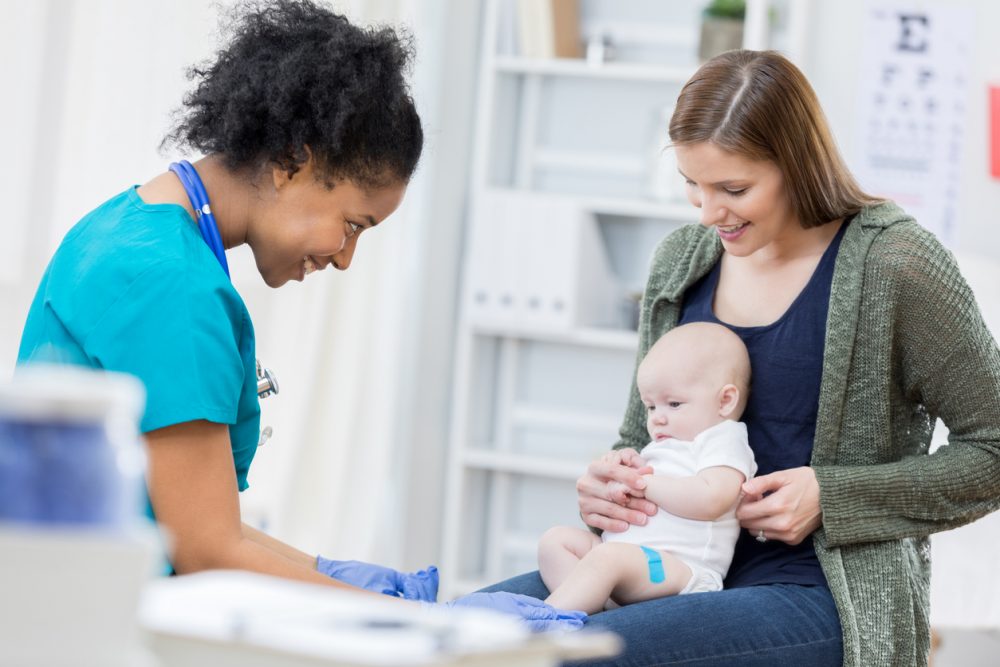 In a blog for parents/carers, Siobhan McCormack, a Paediatric Specialist Registrar, looks at the latest Cochrane evidence on MMR vaccination and at guidance on vaccination during the current COVID-19 pandemic.

In the midst of the COVID19 pandemic, getting your child’s routine vaccinations may be the last thing on your mind, or perhaps you are wondering whether it’s ok to go to a clinic at the moment and whether it would be better to wait. Even without these unusual considerations, some parents worry about childhood vaccinations and whether they are safe.

As a children’s doctor, I was pleased to see that Cochrane have updated a review on the MMR (Measles, Mumps, Rubella) vaccine, giving us the latest evidence on its effectivenessThe ability of an intervention (for example a drug, surgery, or exercise) to produce a desired effect, such as reduce symptoms. and safetyRefers to serious adverse effects, such as those that threaten life, require or prolong hospitalization, result in permanent disability, or cause birth defects.. We’ve also had advice from the World Health Organisation (WHO) about vaccination during the COVID19 pandemic. Before we look at these, a bit about why vaccines are important.

Why are vaccines important?

Vaccines prevent 2 to 3 million deaths per year worldwide currently and have potential to prevent a further 1.5 million with increased availability and uptake (WHO 2019). Vaccine coverage around the world is suboptimal, in part due to lack of vaccine knowledge and confidence. Attitudes towards vaccination including negative perceptions of efficacyThe extent to which an intervention (for example a drug, surgery, or exercise), produces a beneficial result under ideal conditions. and safetyRefers to serious adverse effects, such as those that threaten life, require or prolong hospitalization, result in permanent disability, or cause birth defects. are potential barriers to effective vaccination strategies. 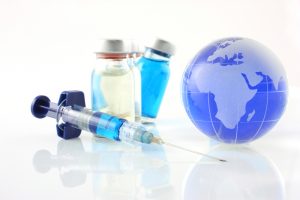 Measles, mumps and rubella (German measles) are contagious viral illnesses, most commonly seen in children and young people. Two doses of the MMR vaccine are part of the NHS vaccination schedule.  These viruses can potentially lead to serious infections resulting in long-term disability or death. Worldwide, measles accounts for one of the largest causes of death in children. The UK has lost its measles-free status and measles outbreaks have been reported across Europe and the United States in recent years in areas where vaccine coverage has been low. Mumps cases soared in England in 2019 with a five-fold increase from the previous year. Most outbreaks have been in colleges and universities, prompting a campaign to encourage young people to get vaccinated, with Public Health England advising that it is never too late for catch-up vaccination if there is any doubt.

What is the guidance on routine vaccinations in the COVID-19 pandemic?

In the midst of the COVID-19 pandemic, other vaccine-preventable illnesses do not disappear, but rather can pose an increased threat if vaccination rates in the populationThe group of people being studied. Populations may be defined by any characteristics e.g. where they live, age group, certain diseases. are not maintained. Even small declines in uptake can have a massive impact for highly infectious diseases such as measles. Children’s charity Unicef has voiced concerns that pausing routine schedules could increase numbers of children at riskA way of expressing the chance of an event taking place, expressed as the number of events divided by the total number of observations or people. It can be stated as ‘the chance of falling were one in four’ (1/4 = 25%). This measure is good no matter the incidence of events i.e. common or infrequent., cause undue pressure on already stretched health services, and even have potential to cause a further pandemic of other contagious, vaccine preventable illnesses. 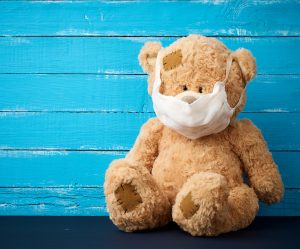 The World Health Organization (WHO) issued guidance in March 2020 emphasising the importance of routine vaccination during the COVID-19 pandemic.

The World Health Organization (WHO) issued guidance in March 2020 emphasising the importance of routine vaccination and advocating that routine sessions be maintained, and this was also endorsed by Public Health England and the Irish Health Service Executive. In the case where this cannot be facilitated, the children affected should be prioritised for catch-up planning as soon as possible. Healthcare providers have been given guidance on measures to take to limit the transmission of the virus during vaccination encounters.

What did the Cochrane Review find?

A Cochrane Review was updated in April 2020 to include the latest evidence on whether MMR vaccines are safe and effective at preventing these illnesses in children. They also looked at the varicella (chicken pox) vaccine, which in some countries is given with the MMR vaccine but is not part of the routine schedule in the UK and Ireland.

Evidence on how well the vaccines work

The studies of how well the vaccines work examined 10 million children across 51 studies. The review authors judged the certainty of the evidenceThe certainty (or quality) of evidence is the extent to which we can be confident that what the research tells us about a particular treatment effect is likely to be accurate. Concerns about factors such as bias can reduce the certainty of the evidence. Evidence may be of high certainty; moderate certainty; low certainty or very-low certainty.  Cochrane has adopted the GRADE approach (Grading of Recommendations Assessment, Development and Evaluation) for assessing certainty (or quality) of evidence. Find out more here: https://training.cochrane.org/grade-approach and found it to be ‘moderate’ for the MMR vaccine and high for the varicella vaccine.

Complete MMR courses were reported to be:

The varicella vaccine was reported to be 95% effective at preventing chicken pox.

Evidence on the safetyRefers to serious adverse effects, such as those that threaten life, require or prolong hospitalization, result in permanent disability, or cause birth defects. of MMR vaccines comes from 13 million children across 87 studies.

Two studies with almost 1.2 million children, of moderate certainty evidence, found no associationA relationship between two characteristics, such that as one changes, the other changes in a predictable way. For example, statistics demonstrate that there is an association between smoking and lung cancer. In a positive association, one quantity increases as the other one increases (as with smoking and lung cancer). In a negative association, an increase in one quantity corresponds to a decrease in the other. Association does not necessarily mean that one thing causes the other. between MMR vaccines and autism.

Two other studies of over 1 million children found no evidence that MMR vaccines are associated with an increased riskA way of expressing the chance of an event taking place, expressed as the number of events divided by the total number of observations or people. It can be stated as ‘the chance of falling were one in four’ (1/4 = 25%). This measure is good no matter the incidence of events i.e. common or infrequent. of a number of conditions, including: asthma, hay fever, dermatitis, eczema, type 1 diabetes, inflammatory bowel disease, multiple sclerosis, leukaemia, encephalitis, cognitive delay, gait disturbance and viral or bacterial infections.

The analyses showed very small risks of fits due to high temperature or fever (febrile seizures) around two weeks after vaccination, and of a condition where blood does not clot normally (idiopathic thrombocytopenic purpura or ITP) in vaccinated children. However, febrile seizures normally occur in 2% to 4% of healthy children at least once and the riskA way of expressing the chance of an event taking place, expressed as the number of events divided by the total number of observations or people. It can be stated as ‘the chance of falling were one in four’ (1/4 = 25%). This measure is good no matter the incidence of events i.e. common or infrequent. of ITP after vaccination is smaller than after natural infection with these illnesses .

These illnesses continue to be a threat to children’s health and increased vaccination uptake will be required to get England back to a measles-free state through this pandemic time where Unicef, the World Health Organisation and Public Health England are all advocating the maintenance of routine vaccination schedules.

If you are still concerned about vaccinating your child, a discussion with your GP or practice nurse may help. The NHS website also has a useful factsheet “Why vaccination is safe and important”. 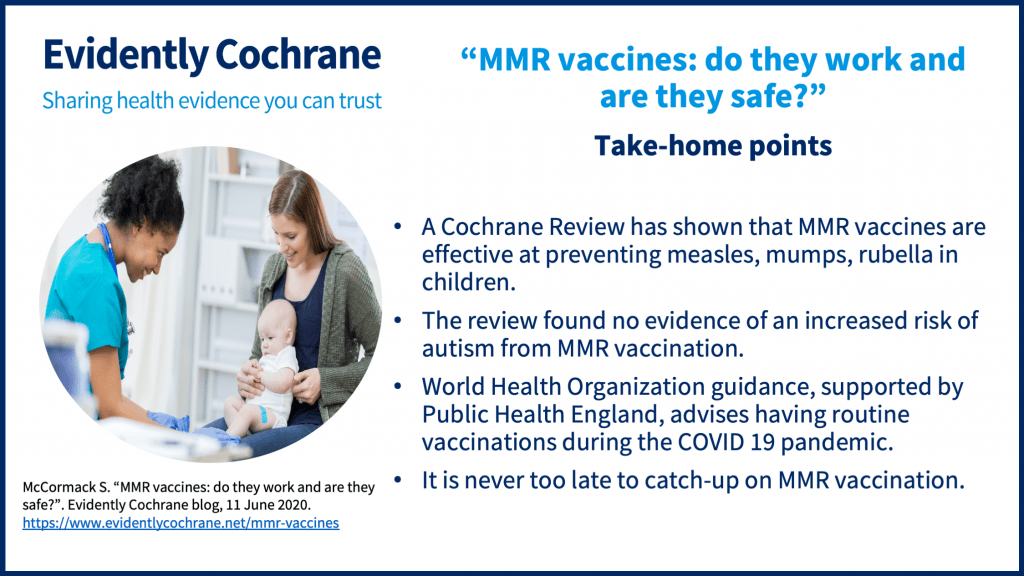 Join in the conversation on Twitter with @siobhanmccorm  @CochraneUK or leave a comment on the blog. Please note, we will not publish comments that link to commercial sites or appear to endorse commercial products.

Siobhan McCormack has nothing to disclose.