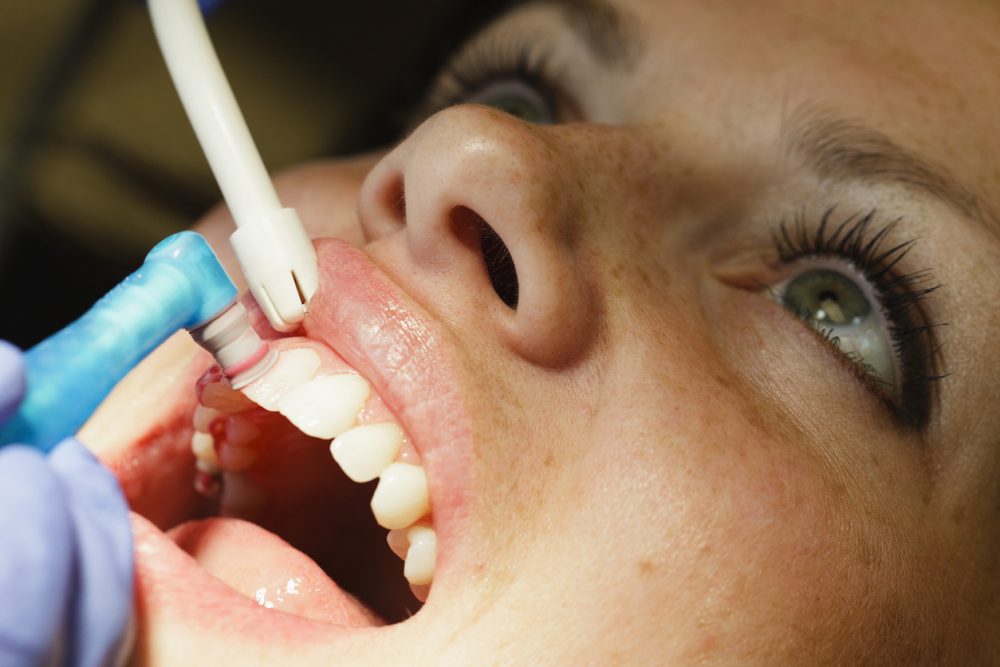 In this blog, Beatriz Goulao, a research fellow at the University of Aberdeen, shares news of the latest evidence on routine scale and polish and dental check-ups, and reflects on the more complicated story that emerges when finding out what people value.

The first trialClinical trials are research studies involving people who use healthcare services. They often compare a new or different treatment with the best treatment currently available. This is to test whether the new or different treatment is safe, effective and any better than what is currently used. No matter how promising a new treatment may appear during tests in a laboratory, it must go through clinical trials before its benefits and risks can really be known. More I ever worked on was called IQuaD – Improving the Quality of Dentistry. IQuaD was a ground-breaking trial: it was testing whether 6-monthly scale and polish improved gums’ health compared with yearly scale and polish or none over three years on regular attenders to the dentist with healthy gums. To my surprise as a dental patient, this was the largest trial ever to test this question. Even though this was such an engrained health behaviour in the UK and worldwide [1,2], there was actually no evidence behind the idea that a scale and polish every six months helps keep your gums healthy. The pleasure from my scale and polish might be meaningless from a health perspective? What a disappointment!

How do we measure gum health?

First things first, especially as a statistician: how do we measure people’s gums’ health? We collected dataData is the information collected through research. More on bleeding on probing, calculus (tartar) and pocket depth as indicators of your gums’ health. Initially I was surprised about this. I thought bleeding gums were just a result of brushing teeth too hard. I did not realise they were indicative of gum inflammation and could lead to more serious disease and even tooth loss. This is the thing about gum disease: it is silent and it can secretly deteriorate until it is found. IQuaD also tested whether personalised oral hygiene advice improved gums’ health or patients’ self-confidence in their ability to brush or floss compared with routine advice (both given by the dentist or hygienist).

No difference in bleeding gums

The results are now out [3] and so is the Cochrane Review [4] that includes them. To summarise IQuaD: there is no evidence of a difference in bleeding between 6-monthly, 12-monthly or no scale and polish over three years in healthy adults that attend NHS dentists in the UK. The differences found were very small and we were confident they excluded the possibility of a clinically meaningful difference between the groups. The same was observed for personalised versus routine advice in bleeding and self-confidence on the ability to brush and floss. The Cochrane Review supports these findings.

We prepared an infographic (below) to disseminate the results to trial participants and dentists with the support from the public and patient’s involvement group at the Health Services Research Unit [5]. The group’s main concern when introducing these results to the public was clear: scale and polish might not improve your gum health, but we should make it clear that patients still need to go back and get check-ups done. Should we? 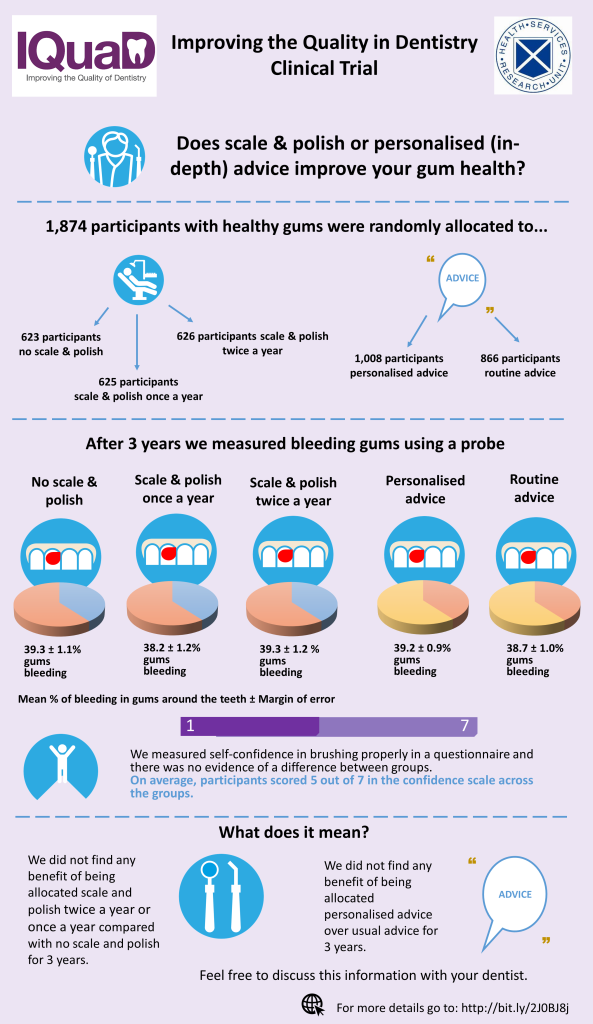 I have always heard that you should go back to the dentist for a check-up every six months. This is routine practice in many countries, including the United Kingdom. It has been a cornerstone of dental practice since mentioned by Pierre Fauchard in 1746 [6], but a lot of experts have questioned the evidence for it.

The most recent Cochrane Review about dental check-ups was published in 2013 and concluded there was very low-quality evidence from one randomised controlled trialA trial in which the people taking part are randomly divided into groups. A group (the intervention group) is given the intervention being tested (for example a drug, surgery, or exercise) and compared with a group which does not receive the intervention (the control group). More, which was deemed insufficient to draw conclusions regarding the potential benefits of changing the recall interval between dental check-ups [7]. We are currently analysing the largest studyAn investigation of a healthcare problem. There are different types of studies used to answer research questions, for example randomised controlled trials or observational studies. More ever on this (INTERVAL) [8]to find out the answer: do 6-monthly check-ups improve your gums’ health, or caries prevalenceThe proportion of a population who have a particular condition or characteristic. For example, the percentage of people in a city with a particular disease, or who smoke. More compared with risk-based or every two years check-ups? As before, we measured gums’ health indicators like bleeding and calculus (tartar). Caries were considered as a secondary outcome. The INTERVAL study results will be available towards the end of 2019.*

We were not just interested in the clinical effectivenessThe ability of an intervention (for example a drug, surgery, or exercise) to produce a desired effect, such as reduce symptoms. More of scale and polish; we also looked at how much people valued the treatmentSomething done with the aim of improving health or relieving suffering. For example, medicines, surgery, psychological and physical therapies, diet and exercise changes. More and why. We conducted a survey asking people’s preferences and willingness to pay for different dental packages. The work, led by Dr Dwayne Boyers, is described in IQuaD’s monograph [3]. A brief summary is: the general populationThe group of people being studied. Populations may be defined by any characteristics e.g. where they live, age group, certain diseases. More value scale and polish and personalised education. Responders to the survey showed a willingness to pay more per year to have their teeth look and feel very clean (compared with look and feel very unclean) than their willingness to pay to never have bleeding gums (compared with having bleeding gums very often). This shows the general population attaches a greater value to shifts in their aesthetic outcomesOutcomes are measures of health (for example quality of life, pain, blood sugar levels) that can be used to assess the effectiveness and safety of a treatment or other intervention (for example a drug, surgery, or exercise). In research, the outcomes considered most important are ‘primary outcomes’ and those considered less important are ‘secondary outcomes’. More compared to changes in bleeding gums.

The results can lead to a more complicated story. If people feel better after having a scale and polish and it contributes to their confidence and their appearance, should we be including it as part of the NHS even though it does not improve gum health?

Unfortunately, many treatments provided in primary care dentistry have been based in anecdotes and weak evidence. With IQuaD, INTERVAL and Cochrane ReviewsCochrane Reviews are systematic reviews. In systematic reviews we search for and summarize studies that answer a specific research question (e.g. is paracetamol effective and safe for treating back pain?). The studies are identified, assessed, and summarized by using a systematic and predefined approach. They inform recommendations for healthcare and research. More on topics such as scale and polish and dental check-ups, we hope to change that and contribute to an evidence-base practice of dentistry. We need good quality evidence to support the treatment we get in our dental practices and how the NHS funds are spent. More research is needed on how to prevent gum disease: even though its cornerstones (scale and polish and oral hygiene advice) have been questioned, there is still a lot to be done. Different types of education or targeting specific groups could lead to different conclusions.

Editor’s note: The Cochrane Review Recall intervals for oral health in primary care patients was updated in October 2020, adding the completed INTERVAL study. It now has more reliable evidence about the impact of different recall intervals on oral health.

Join in the conversation on Twitter with @beagoulao  @CochraneOHG @CochraneUK or leave a comment on the blog. Please note, we will not publish comments that link to commercial sites or appear to endorse commercial products.

IQuaD and INTERVAL were funded by the NIHR Health Technology Assessment (HTA) programme. The views expressed are those of the  author(s) and not necessarily those of the NHS, the NIHR  or the Department of Health.

Beatriz Goulao has nothing to disclose.

Beatriz Goulao is a research fellow working in clinical trials and health services research and a PhD student in Applied Health Sciences, both at the Health Services Research Unit, University of Aberdeen. Beatriz has been working in dental randomised controlled trials for the past 4 years and her PhD focuses on developing methodology to improve them. Beatriz is passionate about research dissemination and implementation and has led public engagement activities related to developing critical thinking skills and increasing awareness of clinical trials. For that work, she was awarded the 2018 Principal's Prize for Public Engagement with Research in the Early Career Researcher category at the University of Aberdeen.

Scale and polish? Shining a light on routine dental care by Beatriz Goulao