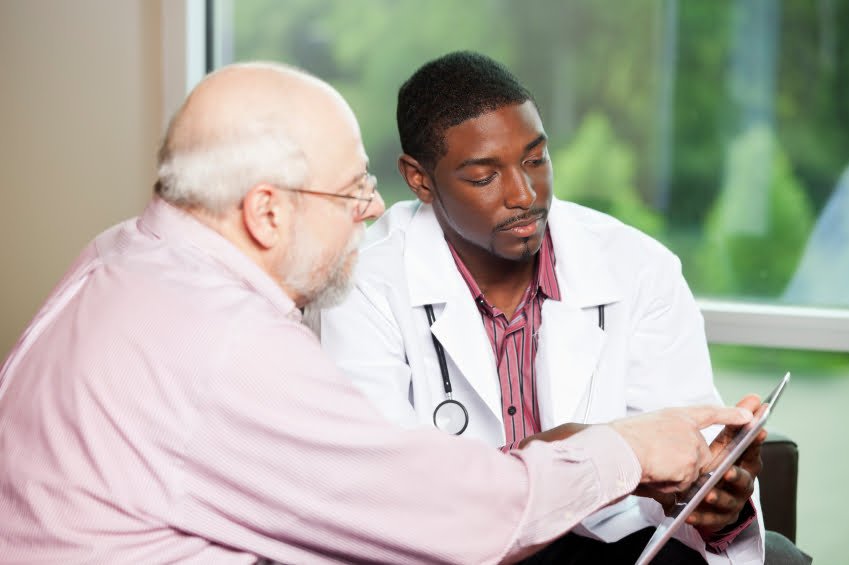 What is aortic stenosis?

Aortic stenosis is a condition where one of the valves which allows blood to flow out of the heart becomes restricted and stops working properly. Imagine a door through which blood leaves the heart which gets harder and harder to open. Initially the heart can compensate just by pushing harder to force the blood out of the heart but as the condition gets worse, not as much blood can exit the heart and travel around the body.  This tends not to cause symptoms if mildly or moderately restricted, however if severely limited then it can cause physical restrictions and also reduce life expectancy. Initially, sufferers might notice that they can’t walk as fast or climb hills quite as steep without getting out of breath.  Pain in the chest and blackouts can also occur.  The strain of the heart trying to push blood through a smaller opening can make the heart muscle thicker and stiffer and eventually it can start to dilate and fail. 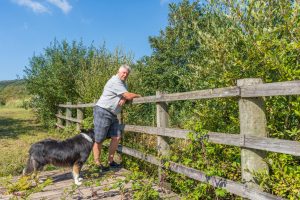 Initially, someone with aortic stenosis might notice that they can’t walk as fast or climb hills quite as steep without getting out of breath.

How is aortic stenosis treated?

There are no medications which help a hardened valve open more easily. There is no anti-limescale or engine oil for heart valves. A very restricted valve can lead to increased pressures within the heart which can in turn be associated with fluid accumulating in lungs and legs and water tablets (diuretics) can help remove this excess fluid, though they do not have any effect on the valve.

The only long-term treatment for the underlying condition is to replace the valve. Traditionally this has involved open heart surgery (first performed in the 1950s). The chest is cut open, the heart stopped and the diseased valve cut out with a new one stitched in its place – this can be metallic or tissue (usually harvested from a cow or pig).  Metal valves last longer but need blood thinning medication such as warfarin to stop blood clots forming on it.

Aortic stenosis typically causes symptoms in people in their 70s and 80s. Open heart surgery carries its own risks and the process of recovering from the surgery can be long.  Typically, people stay in hospital for around a week but it usually takes months to build up strength and return to exercising normally. The risk of the operation relates to not just the valve problem but also fitness levels, other medical conditions and frailty. If people are particularly frail, elderly or have significant medical conditions they may not be fit enough for an operation, as they may be viewed to have an unacceptable risk of not surviving the operation. These people have traditionally been offered palliative treatment – medications to minimise the symptoms without the option of a definitive treatment.

Transcatheter aortic valve implantation (‘TAVI’ or also termed transcatheter aortic valve replacement, TAVR) was developed over 20 years ago as a technique to replace the aortic valve with a keyhole surgery type technique.  The new heart valve is mounted on a collapsible scaffold and often fitted around a deflated balloon. The collapsed new valve is passed to the diseased valve on the end of a wire, from a puncture into an artery (typically, in the groin) using X-ray guidance before the balloon is inflated to deploy it in the same place as the diseased valve which is stretched out of the way by the new valve.  As the procedure is much less invasive (often under local anaesthetic), the recovery period is a lot quicker and people often leave hospital three days after the procedure and can be back to normal activities within weeks. 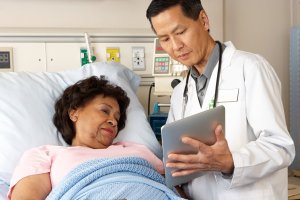 TAVI is much less invasive and the recovery period is a lot quicker than open heart surgery.

Producing a collapsible valve as good as the existing surgical valves and implanting it successfully have been the major challenges of TAVI.  However as more TAVIs are implanted, experience in this new technology and technique grows and complication rates have fallen. There is much more experience with surgical valve replacements with many more years of safety data than with TAVI, but experience with TAVI is growing. Initially it was only used for people who could not have surgery as they were viewed too high risk but as the technique has been refined over the years, there has been an increasing drive to compare it to surgery in intermediate and even low risk people to see if it could become a new standard of care. It is also appealing to certain people who are keen to avoid open heart surgery and have a quicker recovery.

This Cochrane review attempts to answer the question of how good TAVI is in people considered to be low risk – those who would be expected to have a low risk of death or complications from surgery.

The review authors looked at all trials where people with severe aortic stenosis and low surgical risk were randomised to either receive TAVI or conventional surgery and compared the risk of death, stroke and readmission to hospital between the two treatments.  They also looked at the risk of other complications including heart attacks, length of hospital admission, needing a pacemaker, kidney injury and bleeding.

This is an important question as if TAVI was comparable or better then more people may be treated with this less invasive technique with quicker recovery.

What does the evidence tell us?

The review found four studies, including a total of 2818 people. They found there is probably little or no difference, in the short term, in risk of death, stroke, or heart attack between TAVI and a surgical valve replacement.

The risk of needing a pacemaker is probably higher with TAVI; the review authors calculated that for every seven people treated with TAVI there would be one extra person needing a pacemaker, compared with those who have had surgical valve replacement.

The authors are confident (as the evidence is rated as high-certainty) that TAVI was associated with a lower risk of kidney problems, atrial fibrillation and bleeding.

Those who had a TAVI may have a lower chance of needing to be readmitted to hospital, although the quality of data used to answer this question was considered to be low and it is possible that there is no difference between surgery and TAVI in the risk of readmission to hospital.

What about in the longer term?

All of these data only looked at the short term (mostly less than 2 years, although one study followed its patients up for up to 5 years) and the authors concluded that studies looking at how well patients did over many years were needed to paint a true picture of the risks and benefits between the two approaches. People who have lower surgical risk are on the whole younger, fitter and expected to live longer than those who have a higher surgical risk and therefore in this population long follow-up data are important to ensure that TAVI long term complication rates are no higher than conventional surgery: ensuring people are no worse off from this approach.

In these low risk patients there was no difference in the main outcomes of death or stroke. It is established that the typical recovery time after a TAVI is quicker than after a surgical valve replacement. However the long term safety data are yet to be established with TAVI and in low surgical risk patients this is of particular importance. Future safety data including more years of follow-up will be important in aiding clinicans’ and patients’ decisions.

People with severe symptomatic aortic stenosis may want to discuss the options with their cardiologist and factoring in their other medical conditions, their frailty and balancing their short and long term health priorities will be relevant to their decision making. It should also be noted that with this relatively recent technique the availability and waiting time to receive a TAVI is variable in different countries. 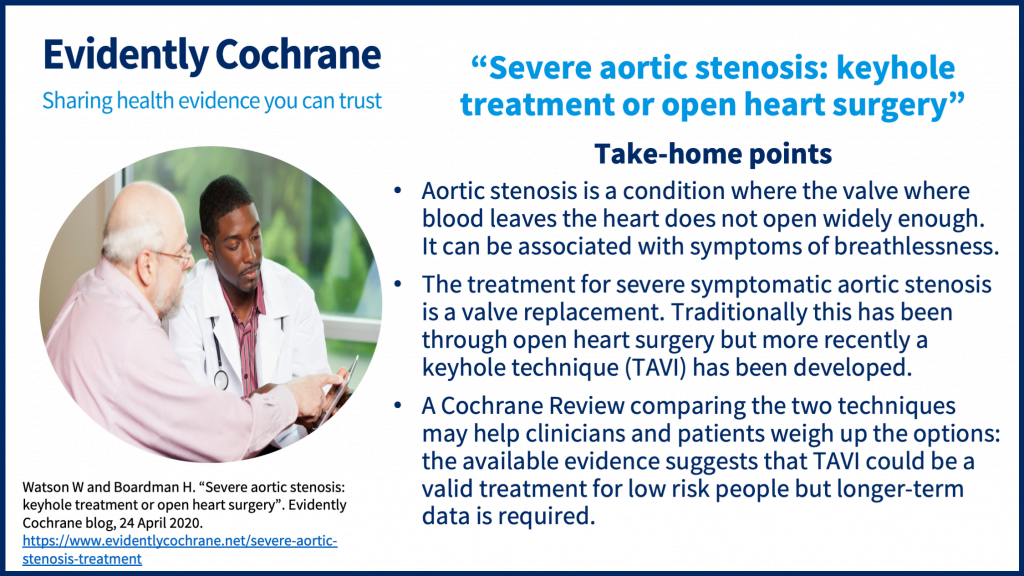 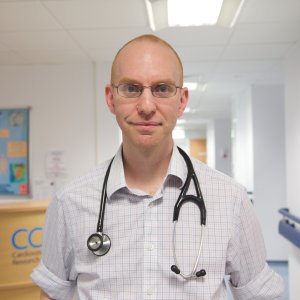 Dr Will Watson’s biography can be seen below.

Join in the conversation on Twitter with @DrWillWatson @harry9bo @CochraneUK @CochraneHeart or leave a comment on the blog. Please note, we cannot give specific medical advice and do not publish comments that link to individual pages requesting donations or to commercial sites, or appear to endorse commercial products. We welcome diverse views and encourage discussion but we ask that comments are respectful and reserve the right to not publish any we consider offensive. Cochrane UK does not fact check – or endorse – readers’ comments, including any treatments mentioned.

Will Watson and Harry Boardman have nothing to disclose.

Dr Watson trained in Cardiology in Cambridge, with an interest in advanced heart failure and heart transplantation as well as the management of patients with complex cardiac issues. He currently works in Oxford researching the metabolism of the heart and looking for new treatments for failing hearts.