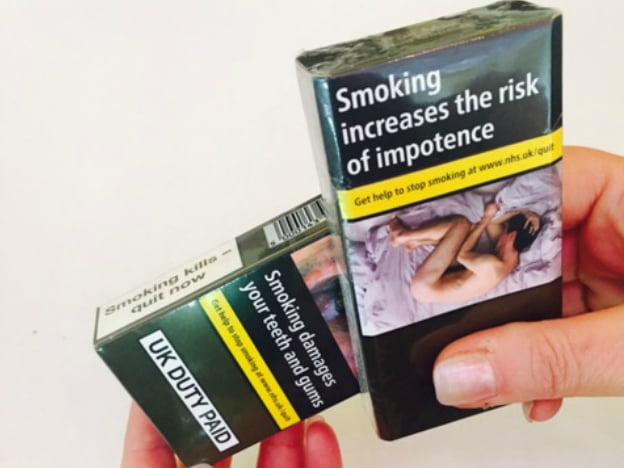 Cochrane UK’s Sarah Chapman looks at what new Cochrane evidence, published today, can tell us about the health impacts of standardised tobacco packaging (or ‘plain’ packaging), ahead of its full enforcement in the UK next month.

“A brand is a promise. Competition between products is really a competition of ideas and promises.”

If BJ Cunningham, founder of the Enlightened Tobacco Company, is right about this, legislation on standardised packaging for tobacco products, which comes into full effect in the UK on May 20th, should deal a significant blow to the tobacco industry and help cut the number of smokers.

But what do we know about what happens if tobacco brands can’t use unique packaging to sell their ideas and promises? Is image, if not everything, powerful enough to change smoking behaviour if you take it away? A Cochrane review published today looks at the evidence behind ‘plain’ packaging.

What is standardised tobacco packaging?

Standardised (or ‘plain’) packaging, as recommended by the World Health Organisation Framework Convention on Tobacco Control, restricts the appearance of tobacco packs with the aim of reducing their appeal. The packs must be uniform in colour, in the appearance of the brand name and, in some cases, shape. They have no logos or branding. In the UK, health warnings are also being enhanced with the introduction of standardised packaging and must cover at least 65% of the packaging.

The power of packaging

Tobacco packaging is the main source of advertising in countries, like the UK, where other forms of tobacco advertising are prohibited. With most smokers starting before the age of 24, and the majority by age 18, new young smokers are the main target of industry marketing, and building brand awareness amongst young people through packaging has been a key part of the strategy (ASH, 2015). Standardised packaging may make tobacco products less appealing, improve the impact of health warnings and reduce uptake of smoking.

A Cochrane review published today brings together the latest, most reliable evidence on the effects of standardised packaging on attitudes to tobacco and on smoking behaviour. The review includes 51 studies involving around 800,000 people. The studies varied in what they did and what was measured. Here’s what they found:

There is evidence from one large observational study carried out in Australia, assessing smoking prevalence in 700,000 people, that tobacco use may have decreased after the introduction of standardised packaging. Confidence in this finding is limited due to the recency of the introduction of standardised packaging, the difficulty of evaluating population level policies (where countries cannot be randomised to policies) and the difficulty in isolating the effects of a policy when introduced alongside other changes to the pack such as enhanced health warnings, but a reduction in smoking behaviour is supported by data collected routinely by the Australian government. Australia was the only country to have implemented standardised packaging at the time of the review.

There was no evidence suggesting that standardised tobacco packaging may increase smoking.

Data from a range of other studies to indicate that standardised packaging reduces the appeal may help explain the observed decline in smoking prevalence. No studies directly measured whether plain packs influence starting or stopping smoking.

Professor Ann Mc Neill, from King’s College London and lead author of this Cochrane review, and Deputy Director of the UK Centre for Tobacco and Alcohol Studies, commented:

An insider in the tobacco industry told the Observer that companies are finding loopholes in the legislation, such as adding promotional price stickers to cellophane wrappers, or using special finishes on the packs to make them feel more appealing. Might standardised packaging be less plain than intended, and packs still come with promises? According to the whistleblower, “nobody really expects it to work”.

The Cochrane review authors are looking forward to further data on the impact of standardised tobacco packaging becoming available as it is enforced in more countries, including our own. Jamie Hartmann-Boyce, from the Cochrane Tobacco Addiction Group, summed up: “Our evidence suggests that standardised packaging can change attitudes and beliefs about smoking… and may reduce smoking prevalence and increase quit attempts.”