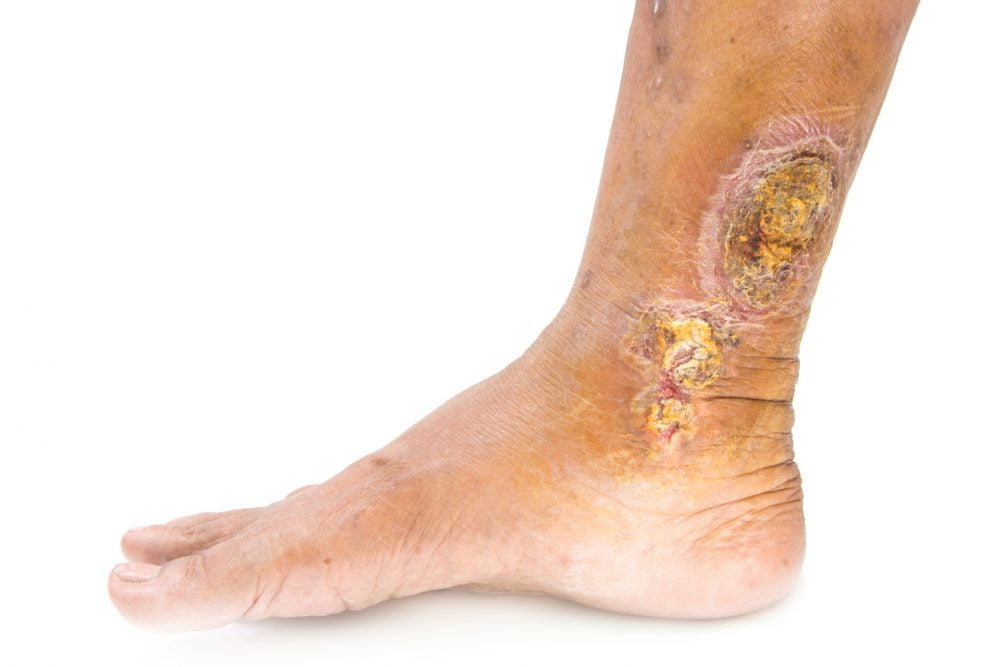 This article for nurses, on venous leg ulcers, is one of a series of evidence reviews written by Sarah Chapman for the British Journal of Community Nursing during 2017. It was published there in September.

Venous ulcers are chronic wounds, caused by venous insufficiency and are the most common type of leg ulcer, affecting around 1% of the population and 3% of people aged over 80 (Franks et al, 2016). Venous leg ulcers (VLUs) most often occur in the gaiter region of the lower leg, from just below the ankle up to mid-calf. They are defined as any break in the skin that has been present for at least six weeks or occurs in someone with a previous history of venous leg ulceration (Norman et al, 2016).

Repeated cycles of ulceration, healing and recurrence are common. It is estimated that 93% of VLUs will heal in 12 months and that 7% remain unhealed after five years, while the recurrence rate within three months of healing is around 70% (Franks et al, 2016).

Venous leg ulcers are painful, distressing and have a considerable impact on quality of life.

They are also expensive to treat. In the UK, most people with leg ulcers are treated in the community and require frequent visits from nurses to care for their wounds (Ashby et al, 2014). Recent research on what matters most to people with ulcers, and other complex wounds, has found that complete wound healing is a high priority (Cullum et al, 2016).

There is a clear need for evidence-based strategies and services to prevent and treat VLUs. The expert working committee responsible for the joint document on Management of Patients with Venous Leg Ulcers from the European Wound Management Association (EWMA) and Wounds Australia, highlight variations in the evidence and guidelines which, with differences in healthcare structures in different countries, potentially cause confusion (Franks et al, 2016). This document focuses on implementation of best practice and provides clinical practice statements which go beyond the scope of this article. This article will focus on evidence from Cochrane Reviews, several of which have informed the EWMA document and international guidelines.

Wound cleansing is an integral part of managing venous ulcers, recommended in many international guidelines, but it is unclear which is the best method or solution.

A guideline published in 2010 by the Scottish Intercollegiate Guidelines Network (SIGN, 2010), along with others, recommends that venous ulcers should be washed with tap water, informed by a Cochrane Review (Fernandez and Griffiths, 2012) that found that infection rates were comparable for chronic wounds washed with (safe) tap water or saline. Some guidelines recommend the use of a neutral, non-toxic solution.  A new Cochrane Review is being prepared to assess the effects of wound cleansing solutions and techniques on healing rates of VLUs (McLain and Moore, 2015).

Best practice documents and expert opinion suggest that debridement, removing dead or dying tissue from the ulcer surface, can promote VLU healing, but is there good evidence underpinning this? Is debridement effective, and how do the methods compare?

A Cochrane Review (Gethin et al, 2015) looked at the impact of debridement on venous ulcer healing and the comparative effectiveness of different methods. Although ten small RCTs were included, no meta-analysis was possible and the review reveals a very limited evidence base for debridement.

Compression therapy, with bandages or stockings, promotes healing through aiding venous return and is the first-line treatment for venous leg ulcers.

A Cochrane Review (O’Meara et al, 2012) has explored the effectiveness of compression and the relative effectiveness of different compression systems on VLU healing. The most recent version of the review, published in 2012, includes 48 randomised controlled trials (RCTs) reporting 59 comparisons.

The review authors note that the methodological quality of the evidenceThe certainty (or quality) of evidence is the extent to which we can be confident that what the research tells us about a particular treatment effect is likely to be accurate. Concerns about factors such as bias can reduce the certainty of the evidence. Evidence may be of high certainty; moderate certainty; low certainty or very-low certainty.  Cochrane has adopted the GRADE approach (Grading of Recommendations Assessment, Development and Evaluation) for assessing certainty (or quality) of evidence. Find out more here: https://training.cochrane.org/grade-approach More is variable, with all trials but one being at high or unclear risk of bias, but also that trial quality is improving over time. In addition, this latest version of the review includes an individual patient data (IPD) meta-analysis of the comparison between four-layer bandage (4LB) and the short-stretch bandage (SSB) in five RCTs.

Since then, the VenUS IV (Venous Leg Ulcer Study IV) randomised trial has compared the clinical- and cost-effectiveness of high compression treatments (Ashby et al, 2017). They found no difference in venous ulcer healing between the 4LB, the current gold standard treatment for venous leg ulcers, and two layer hosiery (HH), below the knee stockings. These two systems deliver the same amount of pressure, but HH is easier to put on and less bulky to wear, which might encourage its use and improve ulcer healing rates. However, the investigators caution that there is too little evidence to draw firm conclusions about relative effectiveness.

There is very little evidence on the use of compression to prevent recurrence of venous ulcers (Nelson and Bell-Syer SEM, 2014). 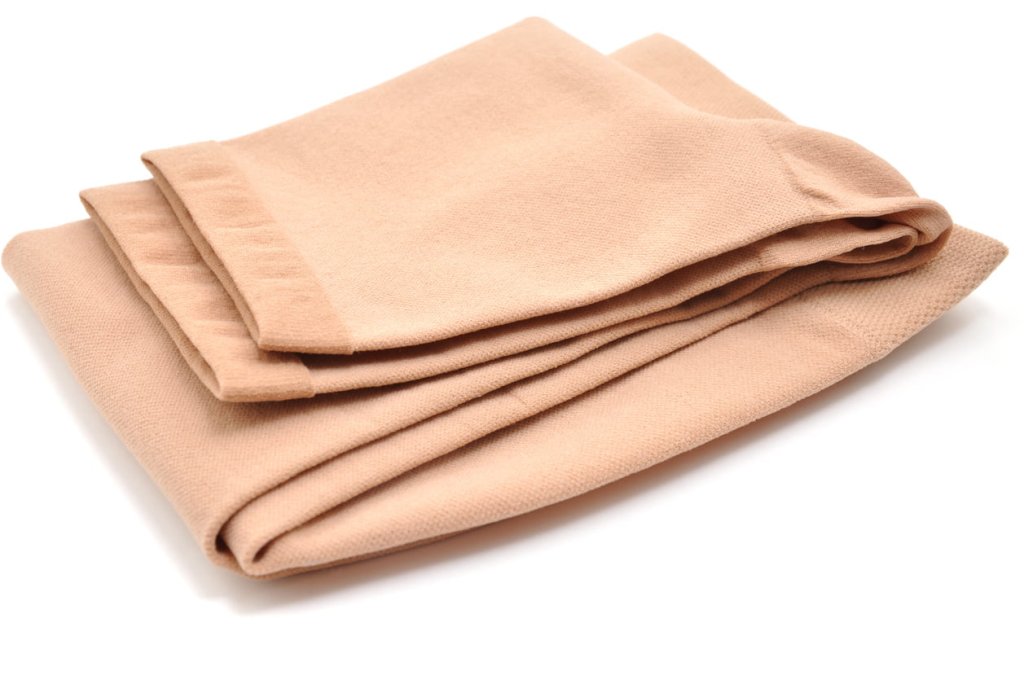 Compression is better than none for healing venous leg ulcers, but it is unclear whether it can help prevent a recurrence

Dressings are usually applied to open ulcers. As well as offering protection, dressings may be chosen for other reasons, such as antimicrobial properties or absorption of exudate. As well as a wide range of types of dressings available, there are a number of topical products, used to reduce infection risk, aid exudate absorption or promote wound healing by other means, as well as topical painkilling agents. Having reliable evidence to guide choices is important, and not only for healthcare professionals. Patients responding to Cochrane Wounds’ online open consultation on research priorities, conducted between May and November 2016, asked in particular for evidence relating to specific dressings.

There are high quality, recent evidence syntheses, including a number of Cochrane Reviews, on particular dressing types and topical agents, but the evidence is low quality and does not provide robust support for any specific dressing or treatment. What is needed is a network meta-analysis (NMA), a simultaneous comparison of linked, multiple, competing treatments in a single statistical regression model. This is being done in a new Cochrane Review (Norman et al, 2017) for the outcome of venous leg ulcer healing, for alternative dressings and topical agents [see this blog on this review].

It is thought that one cause of non-healing of chronic ulcers is prolonged high concentrations of proteases (enzymes that break down proteins into peptides and amino acids) in the wound. PMM treatments aim to reduce protease levels and so aid healing.

There is a lack of clarity in the literature about what constitutes a PMM treatment. The treatments investigated in the 12 studies included in the Cochrane Review on PMM treatments for healing venous leg ulcers were all dressings. The evidence is low quality and the review authors conclude that uncertainty remains about the benefits and harms of PMM dressings compared with non-PMM dressings, and about differences in resource use and total costs (Westby et al, 2016).

There is no evidence from randomized trials on the effectiveness of a ‘test and treat’ strategy, a test to detect high levels of protease activity followed by protease-modulating treatments for ulcers with high levels, on venous leg ulcer healing (Norman et al, 2016).

A Cochrane Review (de Oliveira Carvalho et al, 2016) published last year found insufficient evidence to draw firm conclusions about the possible benefits and harms of aspirin on the healing and recurrence of venous leg ulcers. A randomised trial investigating the effectiveness of aspirin for healing venous leg ulcers (AVURT) is currently in progress.

Sulodexide, a highly purified glucosaminoglycan, has been proposed as an adjunctive treatment for venous leg ulcers, as it is claimed to have antithromboic, profibrinolytic and anti-inflammatory effects. Given orally or parenterally, it is mostly given to people with thrombotic risk diseases. A recent Cochrane Review (Wu et al, 2016) found only low quality evidence that it may increase venous ulcer healing, used along with local wound care. The route, frequency and dosage of sulodexide were poorly reported and it is unclear whether it is associated with adverse effects.

A Cochrane Review (O’Meara et al, 2014) identified an evidence gap on the use of systemic antibiotics to promote VLU healing and noted that current prescribing guidelines recommend that antibacterial preparations (systemic and topical) should only be used where there is clinical infection, rather than just bacterial colonization. This is the guidance given in the only one of the eight guidelines considered in the EWMA document to mention systemic antibiotic use (Franks et al, 2016). 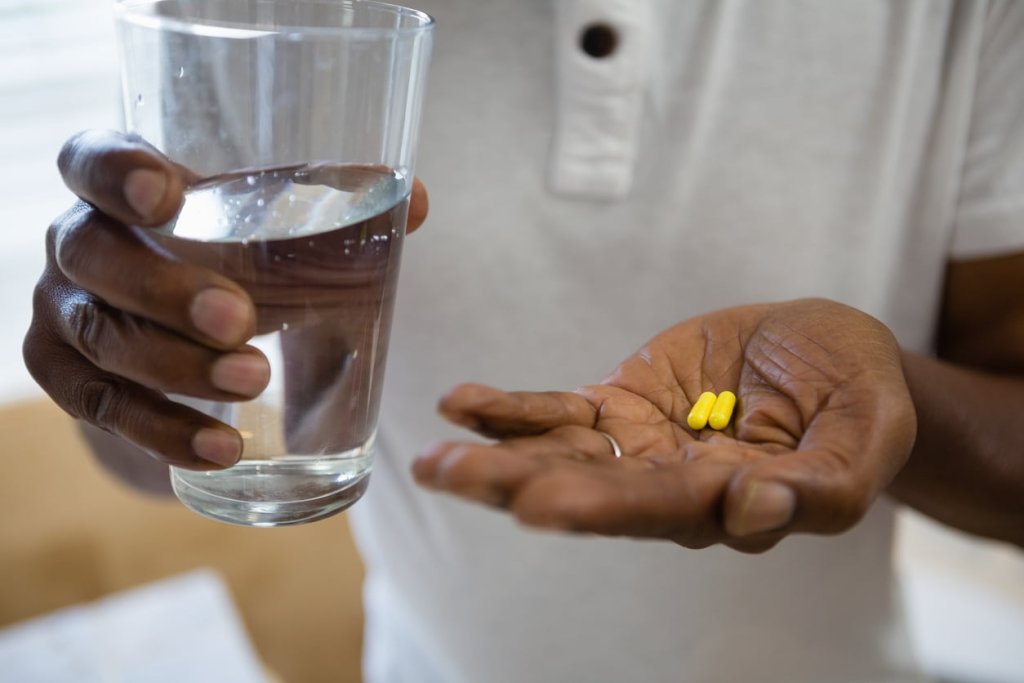 Other treatments for venous leg ulcers*

Cochrane Reviews of several other treatments have highlighted large gaps in the evidence.

A Cochrane Review (Cullum and Liu, 2017) on therapeutic ultrasound for venous leg ulcers has very recently been updated and now includes 11 studies with 969 participants, but it remains unclear whether therapeutic ultrasound improves ulcer healing and the review authors say that any effect is likely to be small.

The effects of electromagnetic therapy (Aziz and Cullum, 2015) and endovenous thermal ablation (Samuel et al, 2013) have yet to be established through high quality RCTs.

The expert working committee responsible for the EWMA document highlight this need, drawing attention to the variation in the quality of services offered to people with VLUs, despite the abundance of literature, as well as variations in the evidence and contradictory recommendations (Franks et al, 2016). Globally, education and training for healthcare professionals is crucial, they say, with the incorporation of Clinical Practice Guidelines in professional training and the expansion of guidelines “to incorporate detailed educational and competency skills, in the clinical environment with senior management support” as “a strategy for putting evidence into practice”.

We must hope that they succeed in their aim of keeping VLU management on the agenda as an international health priority, and that better primary research is being conducted so that new and updated Cochrane Reviews will be able to provide reliable evidence to inform practice.

*Since this article was published, there has been a new Cochrane Review published on subfascial endoscopic perforator surgery (SEPS) for treating venous leg ulcers, which concludes that its role remains uncertain.

Join in the conversation on Twitter with @SarahChapman30 @CochraneUK and @CochraneWounds  or leave a comment on the blog.