This blog is written by Cochrane UK’s Senior Fellow in General Practice, Lynda Ware, for non-medical readers (but health professionals may read it too!).

An overview of Cochrane reviews (a review of reviews, if you like) was published recently, looking at the efficacy of over-the-counter (OTC) painkillers in acute pain. The review examined medication that we can buy off the shelf in supermarkets and from pharmacies without a doctor’s prescription. The aim was to find out how well they gave relief from acute moderate to severe pain.

What did the Cochrane overview look at?

A search was conducted to draw up a list of OTC painkillers available in UK, USA, Canada and Australia. A pill called dipyrone was also added to the list since, although not available in the countries mentioned above, it is possible to buy it in many places worldwide.

Ten Cochrane systematic reviews were identified that assessed the efficacy of these medications. The data from these reviews were analysed, along with some supplementary information on ibuprofen from a non-Cochrane review. Twenty-one different painkillers in various doses and formulations were evaluated. The size of the studies varied from around 200 to 5000 participants.

How were the painkillers assessed?

The model of acute pain used in most of the studies was that encountered after wisdom tooth extraction. This is considered to be a representative example of everyday moderate to severe pain (Derry et al, 2011). The selected painkillers were administered orally as a single dose and their efficacy was compared to a placebo. The outcomes for successful treatment were reported in two ways:

The participants’ experience of pain was assessed immediately before taking the medication or placebo and then over the ensuing study period using standard pain intensity and pain relief scores.

The studies included were of good quality with a low risk of bias.

Take a look at the following bar graphs, which show the results for the 21 preparations studied. 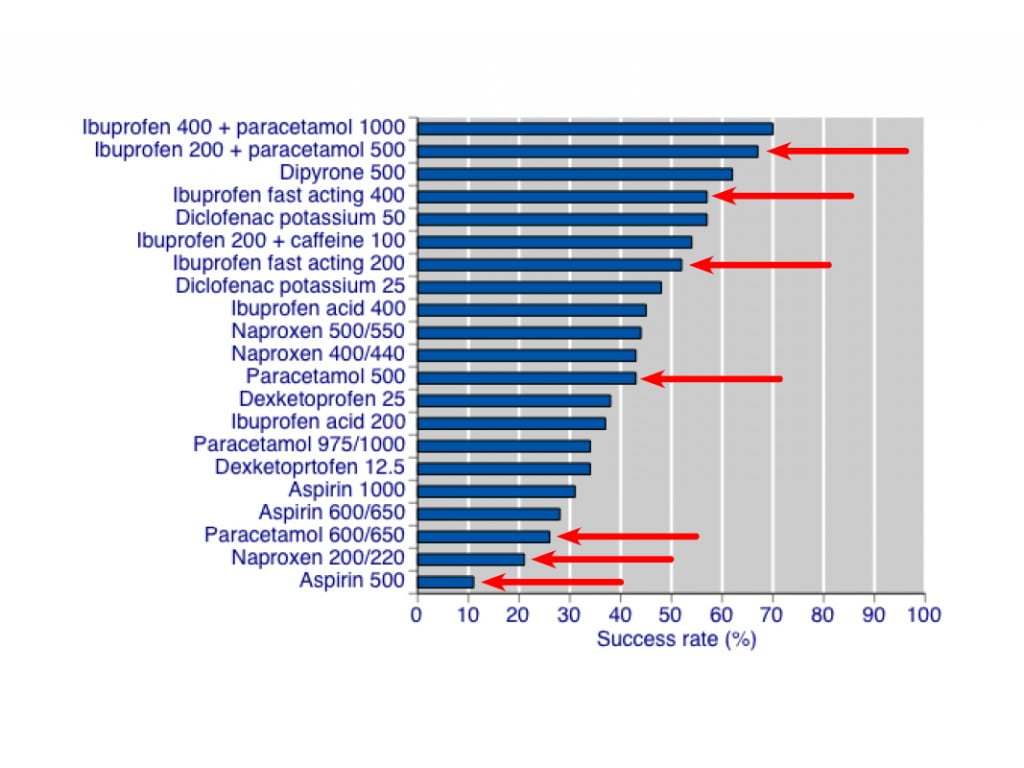 A bar graph showing the success rates of the painkillers. The red arrows highlight those medications available in the UK 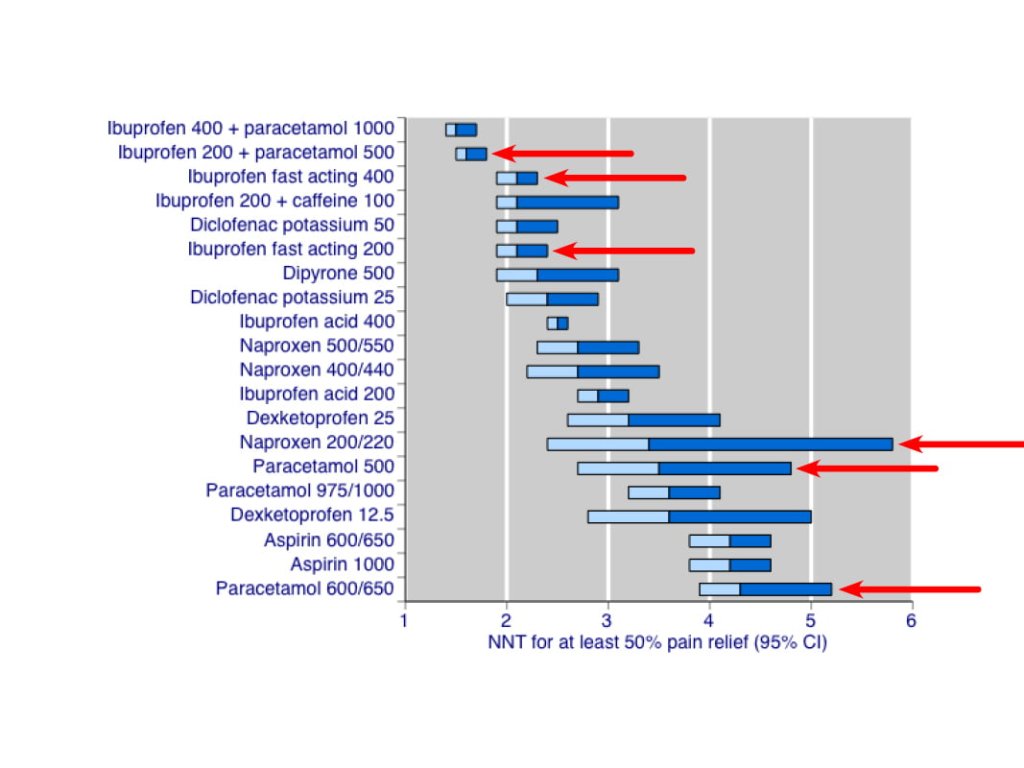 A bar graph showing the NNT of the painkillers. The red arrows highlight those medications available in the UK

What does this mean for us?

Well, it’s good news, especially since we seem to use quite a lot of OTC painkillers!

This Cochrane overview demonstrates that there is a reliable body of evidence to show that simple, inexpensive, readily available painkillers give good pain relief to many of us with acute pain such as toothache, sprains and strains. Ibuprofen/paracetamol combinations and fast-acting ibuprofen formulations are particularly good and are often effective in their lower dosage range. It also appears that adding a mug of strong coffee enhances the effect yet further!

The findings do not apply to chronic pain such as in osteoarthritis and data on tension headache, migraine and period pain were not included.

The reported side effects on the whole showed no difference between analgesic and placebo. Serious adverse events were rare, with only 4 for ibuprofen, 4 for placebo and 1 for naproxen.

There is an absence of evidence on the efficacy of low dose codeine, which is found in several OTC preparations.

Also, standard advice supplied with these medications is to take them with food. This is of particular relevance to ibuprofen, naproxen, aspirin and other NSAIDs, which can cause significant gastric irritation. It is possible that absorption of the drugs is hastened by having an empty stomach. This presents an area for future research.

How well do over-the-counter painkillers work? by Lynda Ware is licensed under a Creative Commons Attribution-NoDerivatives 4.0 International License.
Based on a work at http://onlinelibrary.wiley.com/doi/10.1002/14651858.CD010794.pub2/abstract.

How well do over-the-counter painkillers work? by Lynda Ware