In this blog for women who want to quit smoking in pregnancy, Cochrane authors Jonathan Livingstone-Banks and Catherine Chamberlain look at the evidence on what can help. This blog is part of a series called ‘Maternity Matters’. 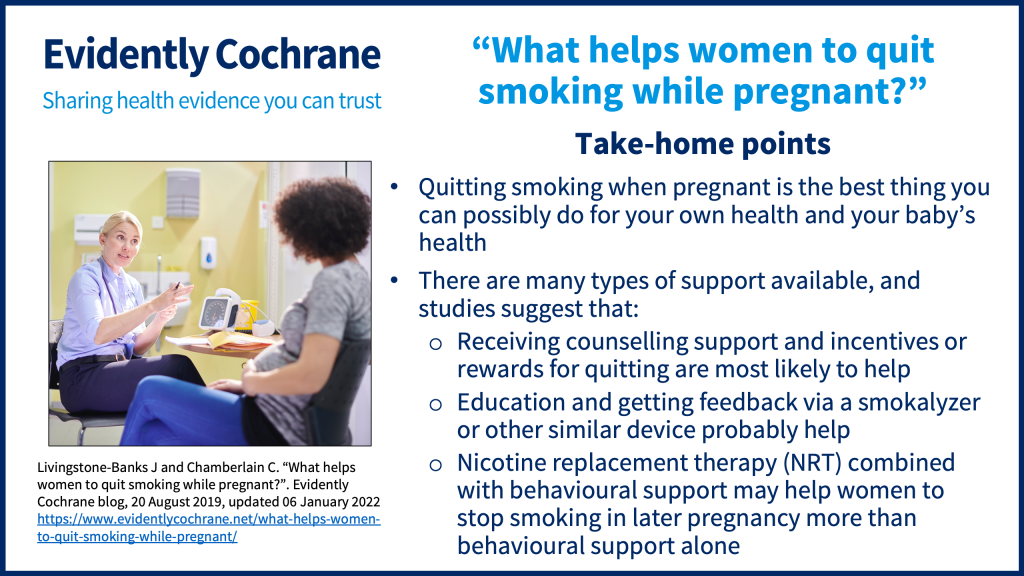 Quitting smoking is really hard, and pregnancy comes with its own set of unique challenges. It’s no surprise then that quitting while pregnant can be very difficult, and even among women who manage it, many start to smoke again shortly after giving birth.

Smoking at any time is dangerous – tobacco kills more than half its users and is responsible for over 8 million deaths worldwide each year (WHO 2019). But tobacco smoking during or after pregnancy is particularly harmful for both mother and baby. Tobacco smoking in pregnancy remains the most serious potentially preventable cause of serious complications in pregnancy (Mund 2013), including low birthweight (Chamberlain 2017), preterm birth (Baba 2012), stillbirth (Marufu 2015) and neonatal death (Kallen 2001). The harmful compounds in cigarettes can restrict the supply of oxygen and other essential nutrients, affecting foetal growth (Crawford 2008) and the development of organs (Morales‐Suarez‐Varela 2006) including the lungs (Maritz 2008) and brain (Herrmann 2008; Blood‐Siegfried 2010). This can lead to life-long health impacts (Gluckman 2008).

That being said, women are more likely to stop smoking when they are pregnant than at any other time. Almost half of all women who smoke before pregnancy ‘spontaneously quit’ before their first antenatal visit (Hotham 2008).  But we know it is harder for women to quit when pregnant if they are also dealing with other challenges (like not having enough money to live on, not having enough support or having a partner who smokes).

Quitting smoking is always a great idea, and women looking to quit now that they’re pregnant deserve the best support. So what are the options for pregnant women who want to quit? And what works?

Psychological and other ‘non-drug’ support for quitting

A huge Cochrane ReviewCochrane Reviews are systematic reviews. In systematic reviews we search for and summarize studies that answer a specific research question (e.g. is paracetamol effective and safe for treating back pain?). The studies are identified, assessed, and summarized by using a systematic and predefined approach. They inform recommendations for healthcare and research. Psychosocial interventions for supporting women to stop smoking in pregnancy (published February 2017), of over a hundred studies, looked at the kinds of psychological and social support that aim to help pregnant women quit. They found that, based on 30 studies of over twelve thousand pregnant women, those who receive stop-smoking counselling are 40% more likely to quit than women who just received usual care, and that strategies like health education and feedback (e.g. seeing results on a ‘smokalyzer’, a devise that detects carbon monoxide from smoking on your breath) probably help, too (although this is based on fewer studies and people).  Counselling can include support getting motivated to quit and developing strategies to cope with smoking urges, including relaxation and diversionary activities.

They also found that, based on four studies of 212 people, women who receive incentives (or rewards) to quit such as money or vouchers are probably more than twice as likely to be not smoking 6 months after they gave birth. This was backed up last month, when a recent Cochrane Review of Incentives for smoking cessation (published July 2019) found the same result, based on nine studies of 2273 pregnant women.

Another Cochrane Review of Relapse prevention interventions for smoking cessation (published October 2019) didn’t find a benefit of giving specific relapse-prevention support to women who’d already quit, either at the end of pregnancy (eight studies, 1523 women) or at follow‐up after they’d given birth (fifteen studies, 4606 women).

There was no evidence that either nicotine patches or fast‐acting NRT (such as gum or lozenge) was more effective than the other.

There wasn’t enough evidence to conclude whether NRT has a good or bad effect on birth outcomesOutcomes are measures of health (for example quality of life, pain, blood sugar levels) that can be used to assess the effectiveness and safety of a treatment or other intervention (for example a drug, surgery, or exercise). In research, the outcomes considered most important are ‘primary outcomes’ and those considered less important are ‘secondary outcomes’., but one trialClinical trials are research studies involving people who use healthcare services. They often compare a new or different treatment with the best treatment currently available. This is to test whether the new or different treatment is safe, effective and any better than what is currently used. No matter how promising a new treatment may appear during tests in a laboratory, it must go through clinical trials before its benefits and risks can really be known. followed up infants after birth and reported that infants of women randomisedRandomization is the process of randomly dividing into groups the people taking part in a trial. One group (the intervention group) will be given the intervention being tested (for example a drug, surgery, or exercise) and compared with a group which does not receive the intervention (the control group).   to NRT were more likely to have healthy development (Cooper 2014).

As for other medicines, bupropion may be no more effective than placeboAn intervention that appears to be the same as that which is being assessed but does not have the active component. For example, a placebo could be a tablet made of sugar, compared with a tablet containing a medicine. in helping women quit smoking later in pregnancy. The authors did not find any studies looking at other stop-smoking medicines or electronic cigarettes (e-cigarettes).

A Cochrane Review (published in 2020) investigated the qualitative evidence about the factors that influence the uptake and use of NRT and e-cigarettes by pregnant women who smoke. The authors concluded that “consistent messages from health professionals, based on high‐quality evidence and clearly explaining the safetyRefers to serious adverse effects, such as those that threaten life, require or prolong hospitalization, result in permanent disability, or cause birth defects. of NRT and e‐cigarettes compared to smoking in pregnancy, could help women use NRT and e‐cigarettes more consistently/as recommended. This may improve their attitudes towards NRT or e‐cigarettes, increase their willingness to use these in their attempt to quit, and subsequently encourage them to stay smoke‐free”.

Join in the conversation on Twitter with @CochraneUK @CochraneTAG @DrCChamberlain #MaternityMatters or leave a comment on the blog.

Catherine Chamberlain is an Australian National Health and Medical Research Council Career Development Fellow and Associate Professor at the Judith Lumley Centre, La Trobe University. Catherine is a Registered Midwife and Public Health researcher whose research aims to improve health equity during the perinatal period, and includes a focus on smoking, diabetes and complex trauma.

Declaration of interest: Jonathan Livingston-Banks – I am an employee of the University of Oxford and managing editor of the Cochrane Tobacco Addiction Group. My salary is funded by the NIHR. I am an author of some of the reviews cited in this blog.

Catherine Chamberlain is an author of some of the reviews cited in this blog.

Jonathan Livingstone-Banks is managing editor of the Cochrane Tobacco Addiction Group and a research fellow at the University of Oxford.

What helps women to quit smoking while pregnant? by Jonathan Livingstone-Banks