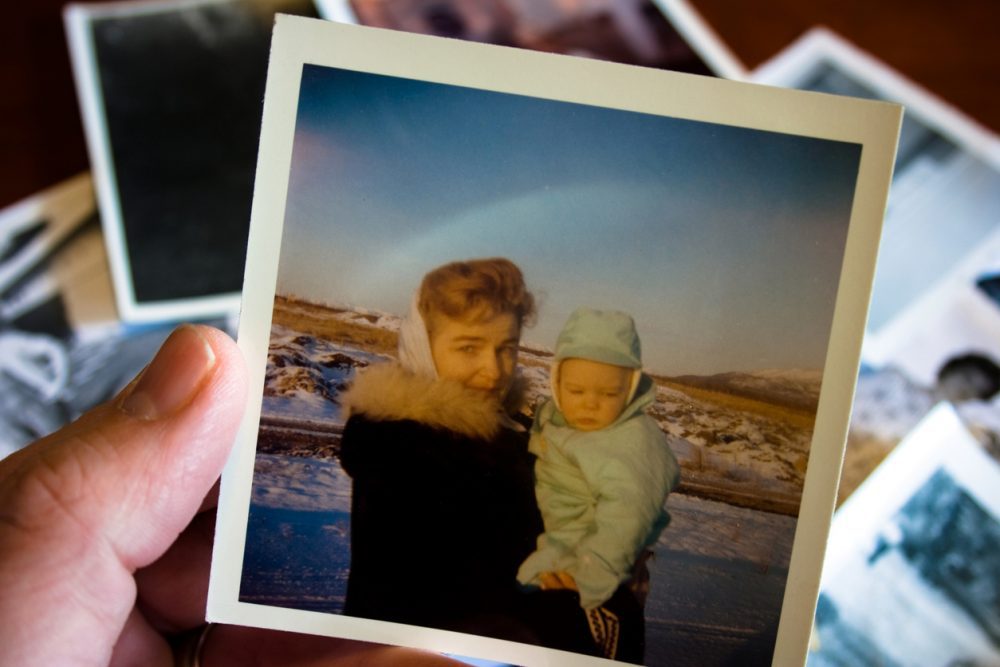 In this blog for our series #dementiaspotlight, Cochrane UK’s Sarah Chapman looks at the state of the evidence on interventions that might help carers of people with dementia and talks to Justine about her experience.

“I am aghast at how quickly my temper frays when nothing I say or do seems to help,” writes Sally Magnusson, whose tender and honest account of her beloved mother Mamie’s last years, of her own experiences of caring for her, and of the devastation wrought by vascular dementia, will stay with me for a long time. Mamie, of course, was not the only one to be caught up in the wreckage of the disease; so too were her family members, Sally amongst them.

With you to the end of it…

When we think about people with dementia, we need to think about those caring for them too. “There is a moral task of caregiving, and that involves just being there, being with that person and being committed,” said Dr. Kleinman, a professor of medical anthropology and psychiatry at Harvard Medical School and a caregiver to his wife. “When there is nothing that can be done, we have to be able to say, ‘Look, I’m with you in this experience. Right through to the end of it.’ ” (Chen, 2010).

With them, through to the end of it, is where many, many people find themselves, as unpaid carers of loved (and even not-so-loved) ones. So what about their needs? 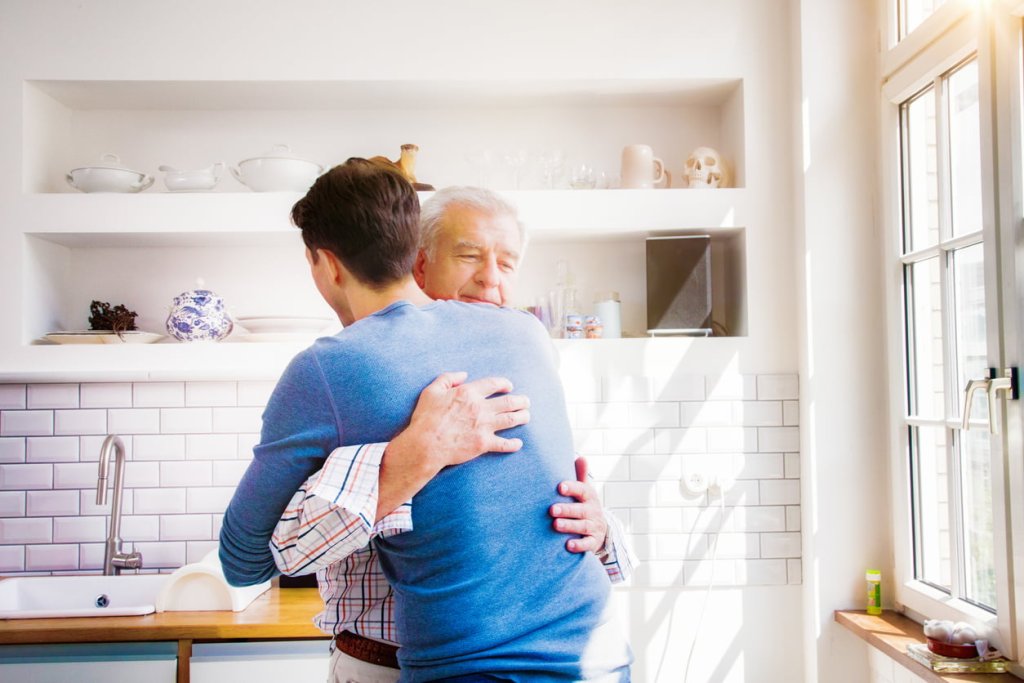 The needs of carers of people with dementia: priorities for research

While research into possible drug treatments makes the headlines and, across health topics, tends to attract the lion’s share of research funding (Crowe et al, 2015), dementia priority setting partnerships (PSPs) have established that unanswered questions relating to the needs of carers are among the top priorities for research, as identified by clinicians, researchers, patients and their carers and families together.

The James Lind Alliance Dementia Priority Setting Partnership for Canada announced its top ten research priorities last month, and half specifically included carers. Their top priority was around the impact of stigma on people with dementia and their families and carers, and ways to reduce it. Other priorities relating to the needs of people with dementia and their friends or family caregivers focused on how the health system could meet their health and social care needs; on services and interventions to improve health and wellbeing; on how to help them secure the information and services they might need after diagnosis; and the impact of dementia-friendly initiatives.

In the UK, the James Lind Alliance Dementia PSP top ten includes the question “what are the most effective ways of supporting carers of people with dementia living at home?” In particular, the specific type of help that is effective; how health and social care services can best be coordinated and accessed; and what helps to delay the need for institutional care, whilst maintaining quality of life for people with dementia and their carers, and maintains carers’ health.

My friend Justine is the main carer for Margaret, although she began as a volunteer visitor through a befriending scheme. As Margaret’s dementia progresses, Justine finds herself doing more and more for her, as Margaret’s only relatives live some distance away. Justine also has experience of dementia in the family, having seen her father-in-law care for his wife with dementia, and now she and her siblings support their father in caring for their mother, who has advanced dementia but remains at home.

“Once you’re diagnosed, you’re pretty much left to your own devices” she told me. “You get to a point where you’re written off, as there’s nothing they can do. I worry that there are things that could be done. Physiotherapy on Mum’s hands could be useful. There is nobody who is trying to improve her life; only keep things as they are.”

This sounds pretty frustrating and lonely. I wondered what evidence there was in the Cochrane Library relating to interventions to help carers, or support for people with dementia living the community, and how any of it matched with Justine’s experiences.

There is a Cochrane review on case management approaches to home support for people with dementia, with case management defined as any intervention delivered in the community predominantly focused on the planning and co-ordination of care required to meet the identified needs of the person with dementia. It is sometimes called ‘care management’. A professional, usually a nurse or social worker, takes a central role. The aim is to improve co-ordination between the different agencies involved and enhance the support given to the person cared for and their carers. It has the potential to reduce carer stress, improve care and keep the person with dementia in the community for longer. 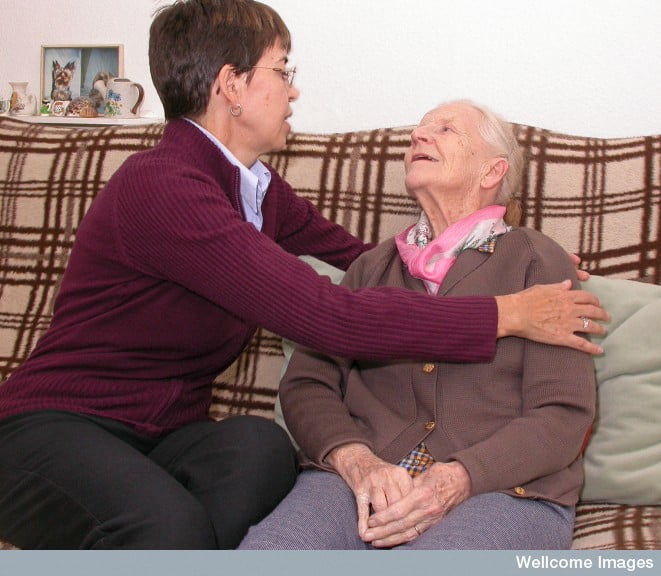 Case management aims to enhance support given to people with dementia and their carers
Photo credit: Libby Welch, Wellcome Images

Justine’s experience with Margaret is that her care is far from co-ordinated, and that funding issues and the burden on services have meant that the little help they were given has been cut further. “I don’t know how long she could cope on her own without me. It wouldn’t take much to tip her into needing to go into a home.”

I asked whether there is a professional co-ordinating support for Margaret. “The Dementia Support Worker was the central figure that if there were any concerns you could go to, but it didn’t work. She’d make recommendations but they didn’t happen, or sorting these things out became complicated and much of it had to be done by me. She visited three or four times a year and wanted to be included in emails between me and Margaret’s relatives, but recently she’s written to say she can now only do a six month review, and in an emergency to contact social services. But social services discharged her.” Where does this leave her?  “I feel that everyone has totally failed her.”

It leaves Justine trying to pick up the pieces. She does what what she can for Margaret on three visits a week, things like sorting meals and medication and opening the blinds (“she wasn’t getting any light”). Justine also goes for any visitors, often arranged by Justine herself, “such as someone coming to check the electricity or having her eyes tested at home. She’s scared to answer the door or the phone”.

I was not surprised to read in the background to the Cochrane review that access to case management varies in different locations and so does its implementation and the way it’s organized. The review includes 13 randomised controlled trials involving 9615 people with dementia, and 11 of the trials also included carers. They took place in different countries, including the UK, with different healthcare systems.

The evidence is a mixed bag and doesn’t provide clear answers; the review authors state that their findings should be treated with caution, and they discuss the need for further research. With respect to carers, they say that “there does not appear to be compelling evidence that case management substantially affects a carer’s quality of life, carer well-being or reduces carer distress”. This is not the same thing as saying it doesn’t work; as yet, we just don’t know.

Does telephone counselling help carers of people with dementia?

There is a Cochrane review on telephone counselling for informal carers of people with dementia, which draws on nine randomised controlled trials and two qualitative studies. Telephone counselling was investigated as a lone intervention or combined with video sessions and/or a workbook, and compared with no intervention, ‘usual care’ or friendly calls for chatting.

There is evidence that telephone counselling, without additional interventions, probably reduces depressive symptoms in carers, but it was uncertain whether it had any effect on other outcomes, such as burden, anxiety or quality of life. The effects of combined interventions are unclear, and there was little information about adverse effects. It is really good to see that this review attempts to evaluate both the effectiveness of telephone counselling through randomised trials and also people’s experiences of it through qualitative research. There is more work to be done before we understand what works and for whom; let’s hope there is high quality work under way which could be included in future updates of the review. 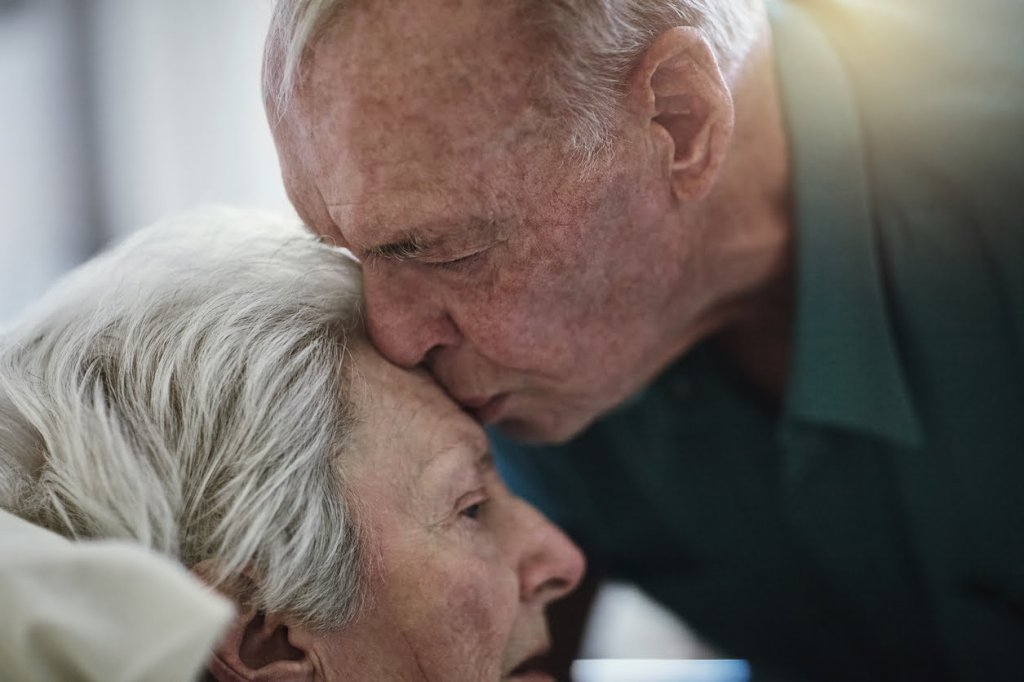 What are the benefits and harms of respite care?

I asked Justine whether her father had been offered respite. “We’ve never been given any information about it”, she told me, “but I don’t think Dad would have trusted anyone else to care for Mum. It’s an invasion of privacy having someone come into the house. My father-in-law felt that too, when caring for his wife”.

The review found only very low quality evidence from four small studies, so the benefits and harms remain uncertain. The review authors drew attention to the fact that only one of the studies considered outcomes for people with dementia, and cautioned that we “must ensure that the lack of attention paid to people with dementia in the literature does not translate into a similar lack of attention in practice.”

Added to many practical and political obstacles to providing optimal support for carers and the people they care for is a poor evidence base, which does not provide clear guidance for those making policy or funding decisions. We must hope that relevant and robust research is under way to help change this situation.

As recent priority setting work has shown, dementia research needs to be about so much more than drugs (do read Wendy Mitchell’s blog on her experience of participating in research), and we urgently need to find ways to help those who support people living with dementia, as well as ways to improve the health and wellbeing of those who have it.

Don’t carers need someone to say to them, “Look, I’m with you in this experience. Right through to the end of it”?

Do join in the conversation on Twitter with @SarahChapman30 @CochraneUK #dementiaspotlight or leave a comment on the blog.

Carers of people with dementia: with them, through to the end of it by Sarah Chapman