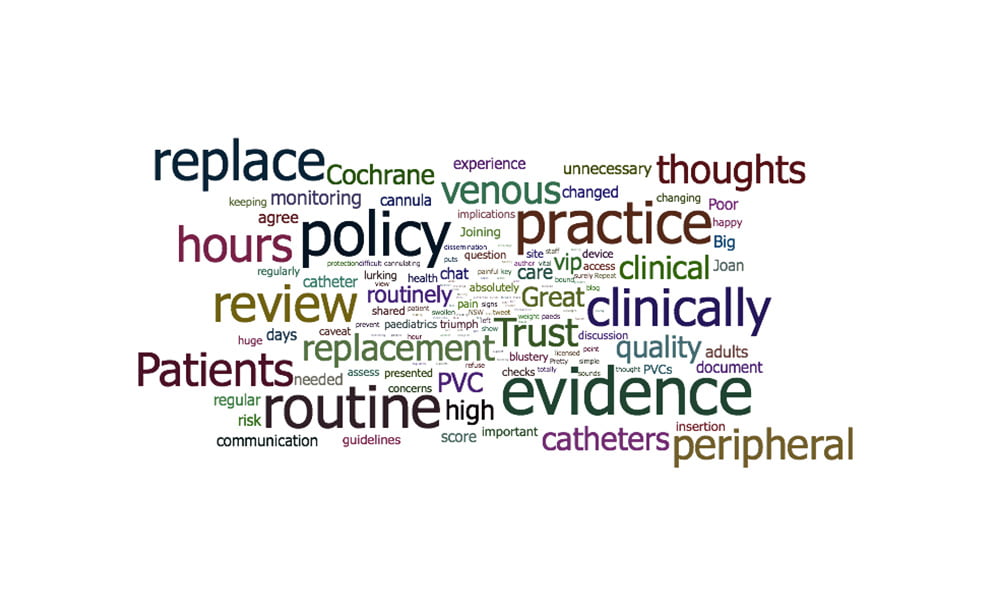 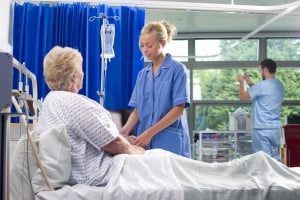 The UK’s epic3 Guidelines recommend changing PVCs only when clinically indicated, based on Cochrane evidenceCochrane Reviews are systematic reviews. In systematic reviews we search for and summarize studies that answer a specific research question (e.g. is paracetamol effective and safe for treating back pain?). The studies are identified, assessed, and summarized by using a systematic and predefined approach. They inform recommendations for healthcare and research. More

Last week, I wrote a blog summarising reliable Cochrane evidence which supports replacing peripheral venous catheters (PVCs) only when clinically indicated. A previous version of the review informed The UK’s epic3 National Evidence Based Guidelines (2014) which recommend that short peripheral catheters should be replaced when clinically indicated, being both safe and cost-saving. In the UK, at least, I would expect this to be reflected in practice, but I already knew from Twitter conversations that routine replacement of PVCs is not uncommon. This week, I guest hosted a @WeNurses tweetchat to explore what’s happening now, what practitioners think about this evidence and whether it can support a change in practice where routine still rules.

Who joined the chat?

We had 63 contributers to the chat, sharing over 400 tweets, the majority nurses from different specialties and nursing students. It was great that we were also joined by a radiographer, giving us a view from another area of practice, and by Professors of Nursing Claire Rickard and Joan Webster, authors of the Cochrane reviewCochrane Reviews are systematic reviews. In systematic reviews we search for and summarize studies that answer a specific research question (e.g. is paracetamol effective and safe for treating back pain?). The studies are identified, assessed, and summarized by using a systematic and predefined approach. They inform recommendations for healthcare and research. More. Most were in the UK but we had contributions from Australia too, where Joan is Nursing Director for Research in at the Royal Brisbane and Women’s Hospital and Claire leads the AVATAR (Alliance for Vascular Access Teaching And Research) Group. The word cloud at the top was generated by the chat.

Many said that their local policy is to change them at 72 hours. There were some caveats. One said that it could be left longer if access is particularly difficult; another that replacement at 72 hours is usual and that although review to see if the PVC can remain in place is encouraged this doesn’t tend to happen. Adult nursing student Darren said “my placement area tend to change them after 4 days, regardless of need”. Another student, Lee, reported that changing at 72 hours was the norm in his placements, “unless difficult access, then monitor and record”. We were all horrified to hear that in one place the routine replacement policy has been retained ‘so junior doctors can get enough practice!’

But clinical indicators are the drivers for some

Micahel told us that “in the community a pragmatic approach is often adopted using VIP scale”. One contributor expressed concern about the accuracy of recording of VIP (Validated Infusion Phlebitis) scores and another cited this as one of the reasons for impending policy change, but this system was mentioned by several. “All care workers should know signs that should be reported”, commented Anne-Marie.

In paediatrics, unnecessary procedures are rightly seen as unacceptable.

Radiographer Janice said she changes the PVC if she is unhappy with it, irrespective of time in situ, noting that some CT exams require high flow rates and that that they have to be mindful of IV contrast extravasation. Her practice is to flush with saline after the exam and check with the ward if the cannula can be left in. “As a cannulating radiographer it is a priority that I work with my nursing colleagues to ensure best practice”.

In paediatrics, re-siting when clinically indicated seems to be the norm and the idea of doing unnecessary procedures rightly regarded as unacceptable. As Claire asked, “why is that seen as safe but not in adults?”

Could it lead to complacency, one asked? Someone else thought it could, but this would be outweighed when balanced against the risks, and could be mitigated by training. The UK-based venepuncture and cannulation training folk, @vipvctraining, said their teaching is firmly based on the guidelines and they advocate replacing when clinically indicated.

According to Joan Webster, it’s “pretty simple really; if the site is red, swollen etc, take the device out. This may be after 10 hours or ten days …”

How long could a PVC remain in situ?

Claire says they are licensed by regulatory authorities for 30 days use and that she has used them for around 20 days. She also notes that most fail by 72 hours. “If they make it to 72 hours, let’s not ruin it!”

What about the patient?

Happily, there was plenty of discussion about consideration for the patient. Several pointed out that it’s important not to site, or re-site, PVCs unless there is a clinical need to do so, and to remove them as soon as no longer required. Comments included that they are painful, that anaesthetic creams can be ineffective and that cannulation skills are variableA factor that differs among and between groups of people. Examples include people’s age, sex, depression score or smoking habits.   More. Joan Webster said that returning patients who have taken part in their trialsClinical trials are research studies involving people who use healthcare services. They often compare a new or different treatment with the best treatment currently available. This is to test whether the new or different treatment is safe, effective and any better than what is currently used. No matter how promising a new treatment may appear during tests in a laboratory, it must go through clinical trials before its benefits and risks can really be known. More now refuse to have their PVCs changed routinely! We liked this! “Patient power! No routine replacement thank you very much!” Patients and carers, it was noted, can be powerful advocates in achieving the implementation of evidence.

The argument should be over

We have good evidence that replacing PVCs when clinically-indicated does not put patients at increased riskA way of expressing the chance of an event taking place, expressed as the number of events divided by the total number of observations or people. It can be stated as ‘the chance of falling were one in four’ (1/4 = 25%). This measure is good no matter the incidence of events i.e. common or infrequent. More of complications of IV therapy and and saves money. So are there any reasons NOT to do this? “Wouldn’t that be poor practice?” asked Charlotte. It seems that there are obstacles to change.

Kaye said that their policy (in New South Wales) is to replace routinely at 72 hours because blood stream infection (BSI) is a concern. Yet the evidence doesn’t support this. Cochrane authorSomebody responsible for preparing and, in the case of Cochrane Reviews, keeping up-to-date a systematic review. The term ‘reviewer’ is also sometimes used to refer to an external peer reviewer, or referee. More Claire noted that there were half the BSIs in clinically indicated PVCs and that we don’t know whether making holes in skin 72 hourly causes BSI.  Craig thinks that re-siting PVCs ‘just in case’ puts patients at risk.

It seems that culture is an obstacle to change here, with Kaye noting that “their argument is that translation into practice is difficult”.  Depressingly, when asked if this is just a triumph of tradition/culture/habit over evidence, Kaye says “Absolutely! It has always won!” “The weight of tradition and experience of BSI outweighs the evidence for clinical replacement.”

While Trust policy should be evidence-based, it isn’t always. Several people thought Trusts would be reluctant to change their policies, despite the weight of evidence. Might there be concerns about accusations of neglect? Policies, it’s felt, are not easy to change and it was suggested that it would take a brave Trust to change their policy. Why should this be so, when all the evidence is in favour of clinically-indicated replacement? It was good to hear news of one Trust that has just done this, resulting in “30% less cannula insertions and no increase in VIP scores”.

Evidence into action: what will you do now?

There was a strong sense that the evidence necessitated action where practice isn’t following it, with talk of  professional responsibility to raise concerns and to challenge current practice that has been shown not to be based on the best available evidence. It was agreed that staff are bound by policy but that policy should be challenged. Several people finished the chat determined to take action. Here are some of the intentions and suggestions:

These last two came from nursing student Darren and from Craig, an Infection Prevention Nurse, and they were as good as their word. Darren was told by the ward sister that “she likes them out after three days” and when Darren told her about the evidence she said replacing after 72 hours is Trust policy. Other nurses there said this policy had been implemented as a knee-jerk reaction to an incident, instead of improving checking of PVCs. Darren is now going to contact infection control about this. Great news Darren and do go clutching epic3! Craig tweeted an update too: “we are on it and will be making change soon based on the latest evidence: tweetchat to action.” Fantastic! 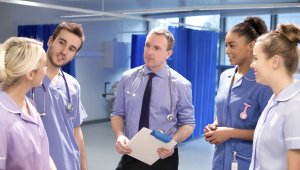 It would be wonderful to hear what other people have done since reading and discussing the evidence. Have you shared it with colleagues or done something towards changing practice where it doesn’t follow this evidence? Do tell us about it here in the comments section. You can also join in the conversation on Twitter with me @SarahChapman30 and @ukcochranecentr, and of course @WeNurses. If you can, use our series hashtag #EENursing as well as #WeNurses.

Thank you everyone for what was an incredibly interesting tweetchat. At the end, Nick Chinn @NRCUK, who had been lurking from #WeNurses HQ, asked “how often is policy driven by best quality care? Are other factors important to them?” while Teresa @AgencyNurse wanted to know “how empowered/supported do clinicians feel to be able to challenge policy?” Interesting questions for another tweetchat surely, and perhaps we can also come back in six months to find out if there have been changes in PVC replacement policy.

Getting evidence into nursing practice: replacing the routine by Sarah Chapman is licensed under a Creative Commons Attribution-NoDerivatives 4.0 International License.
Based on a work at http://onlinelibrary.wiley.com/doi/10.1002/14651858.CD007798.pub4/abstract.
Permissions beyond the scope of this license may be available at http://onlinelibrary.wiley.com/doi/10.1002/14651858.CD007798.pub4/abstract. The images within the blog are not available for re-se as they have been purchased from istock.com for Evidently Cochrane.

You can see the details of the tweetchat here http://wecommunities.org/tweet-chats/chat-details/2581

There is now an NIHR Signal available on this review:

Getting evidence into nursing practice: replacing the routine by Sarah Chapman