In a blog for anyone interested in how mental health topics are visually represented, Sarah Chapman from Cochrane UK reflects on a tweetchat which invited people to share their views. This blog is one of a series on Evidently Cochrane, #YoungMindsMatter.

Pictures are powerful. Art stirs us. Images can repel or attract, make us feel “this is for me, this IS me”, or quite the opposite. At Cochrane UK, we are continuing to think and learn about image choice, as part of sharing Cochrane evidence in blogs and other online formats, as I have most recently blogged about. It’s something our colleagues at Cochrane Common Mental Disorders are thinking about image choice too, as Jess Hendon discussed in a blog, and we continued the conversation on Twitter last week, including in a tweetchat about illustrating mental health topics. Here are some things that emerged from those discussions.

Unsurprisingly, ‘headclutcher’ images were mentioned by several people as being offputting: tokenistic, narrow, too focused on the individual. However, one person with lived experience of mental health problems chose a photo of a young man squatting by a wall, head in hands, as an example of a picture that works for him because he finds it relatable. I think it’s notable that the image looked natural and lacked the exaggerated facial expressions that are often part of headclutcher stock images.

Interestingly, a 2015 survey conducted by SANE Australia on visual depictions of mental health found headclutcher images divided opinion, with some feeling they stigmatised and others that they gave a fair representation of mental ill health.

Clean, simple, and don’t only focus on the negative

One person expressed a liking for clean and simple, relatable, images that are not too graphic. These can say a lot, they suggested, without showing a lot. A preference for clean, simple images was also expressed by young people working with @Cochrane_CCMD, who also said they didn’t want them to focus on the negative. @Vartika_Sharmaa explained that the young people said that images triggering negative feelings can make them feel more vulnerable, more isolated and perhaps more reluctant to seek help.

Young people said they don’t want images to always focus on the negative.

Several people mentioned that it is good to show images of people doing everyday things, challenging the idea that people with mental ill health are just in bed or in healthcare settings. Whilst being careful not to oversimplify, or just show smiling faces, it’s also important to show a variety of activity and experience, embracing the range of positive, neutral and negative.

I loved the suggestion that rather than just portraying negative aspects of mental health we should use images that show the strength and resilience that is often required day to day by people managing mental health problems.

Showing images where a person looks outwardly happy can serve as a reminder that you can’t always tell how someone’s feeling. Quentin Blake captured this perfectly in his illustration for Michael Rosen’s ‘Sad Book’, Emily mentioned as really resonating with her in this blog.

A photo showing a woman with a neutral expression hiding inner turmoil emerged as the favourite among respondents in SANE Australia’s survey. ‘Providing more images depicting people from diverse backgrounds, doing everyday things, while also illustrating a hidden experience of adversity’ was one of their five recommendations that emerged from this project.

There were interesting reflections that depictions of mental health tend to focus on the internal and the individual, ignoring societal aspects of mental health. It’s important that we remember to include this in the mix when selecting images.

Human images that are alternatives to faces

We’ve found, in conversations with colleagues, differing opinions about showing back views of people. I like them and think they can be poignant and reflective, but I know others who think they could be stigmatising by perhaps suggesting a preference for anonymity. Someone on Twitter felt that showing people but avoiding faces can get round the problem of ‘the jumble of posed emotion’ found in stock images.

Another offered that using photos of people’s hands can work well, as being “intimate, real and individual, but also universal and not too disclosive”. I also like images of hands and have used them to depict the tenderness of caring for someone, but this has fallen foul of those calling for #NoMoreWrinklyHands!

Alternatives to images of people

Abstract images and landscapes appeal to some of us; they give us different ways of reflecting feelings. A landscape photo wasn’t popular with respondents to SANE Australia’s survey though, and one of their recommendations for image selection was to emphasize the human experience of mental illness rather than featuring abstract depictions. However, I think it’s important to keep this type of image in the ‘could use’ pile, rather than in the ‘do not use’ pile – where we’d put images we think could act as harmful triggers, offend or stigmatise.

It may be that more people will relate to images of human experience than abstract images or landscapes, as Guardian picture editor Fiona Shields noted in relation to illustrating climate change stories, as I mentioned in an earlier blog. She also reflected that the emotional tone has to be right and the image has to confirm what the text is saying, and these are important considerations for us too.

Good stock images do exist, but several of you mentioned that they can feel false, posed, and many aren’t relatable, a problem not only confined to mental health topics. A great alternative that was suggested is to use images created by people themselves.

@bellastarling, Wellcome Trust Engagement Fellow, mentioned that they ran a photo competition, asking for entries based on people’s experiences, which produced powerful, relatable images but also helped develop a research community. There was some discussion about ‘photo voice’ as a great participatory method and way of gaining insight into authentic depiction of mental health issues, which might also reveal gaps in our understanding.

There is a large and wonderful body of work, which you might find through the hashtag #graphicmedicine, by illustrators using drawings, with or without text, to depict their experiences of mental health and illness. @dr_know shared this list of graphic novels about mental health for anyone interested.

We shared this illustration done by the talented @KMorley9, who contributes her experience and skills as a Cochrane consumer‘Consumer’ is Cochrane’s preferred term for patients (or someone with personal experience of a health condition), care-givers or family members of someone with a health condition. (https://consumers.cochrane.org) with @Cochrane_CCMD, and here’s what she said about it:

“I made this image to illustrate my initial indiscriminate internet searches for information about my OCD [Obsessive Compulsive Disorder]. It’s authentic: my feeling at the time was that I was drowning in a sea of confusion and misinformation.”

As well as capturing lived experience, this is so much richer than something we might have chosen from a library of stock images to illustrate this topic – ‘person with laptop’ perhaps!

We asked what you thought of these graphics

The three images above were developed by Cochrane Common Mental Disorders to support the dissemination of their reviews in partnership with graphic designer Annina Diston and with input by people with lived experience. They have felt unsure whether these images were good to use, because of a lack of consensus among their wider team, so it was really useful to ask what people think.

‘Hold me tighter’, which shows a couple embracing, got a really positive response during the tweetchat. It was seen as powerful, relatable. One person said: “I look at this and I think ‘that’s it, you’ve nailed it’. Seeking comfort from those you love, whilst simultaneously drowning in a thick grey goo/fog of despair that you can’t make sense of. There’s a hopeful quality to this image too.” Another felt it would be an encouraging image to come across if looking for information online.

People also liked ‘Blanket shell’, depicting both struggle and hope. One person commented: “This brilliantly captures those times when one can only just peep out into the world. I see the ‘blanket’ as all the mental craziness going on in the mind, and the blue one as stability & life-saving sanity of the hand being reached.”

There was a more mixed response to ‘Never forget my rucksack’, showing a young person wearing a heavy backpack and a supportive friend standing by. However no-one found any of these images objectionable. The rucksack was seen as representing a burden of mental ill health and some people liked the social, supportive aspect of this image.

I have far more to say about art and medicine than there is space for here, but I do just want to mention two things. One is a reminder that art, including (especially!) that arising from the artist’s lived experience of illness, has so much to teach us about that experience and can contribute a great deal to improving health care through educating those working in it. This project, ‘helping doctors connect with patients by art’, shared by @PatientAsPaper a while ago is a lovely example.

The other is that we can look beyond the canvas and the photo and draw on other art forms, for profound and moving depictions of human experience, as with this stunning bronze sculpture by Albert György, ‘Mélancolie’.

Variety and authenticity seem to be key

Something that the discussions reinforced for me is that there is bound to be a variety of opinion and what one person finds relatable another might not, but surely that’s ok? After all, we share Cochrane evidence in different formats (from the full reviews and Plain Language Summaries to blogs, podcasts, infographics and more), knowing that not everyone will like or want each one, but to suit different needs and preferences for accessing information. I think we need to do all we can not to fuel stigma and stereotyping, and indeed to challenge that and help create a different narrative about mental health. We also should provide many different visual depictions of mental health and illness, in the hope that there will be something for everybody in the range of images we use and reflecting the huge variety of lived experience.

Let’s keep talking, sharing ideas and examples of where we think this has been done well. Do let us know what you think! 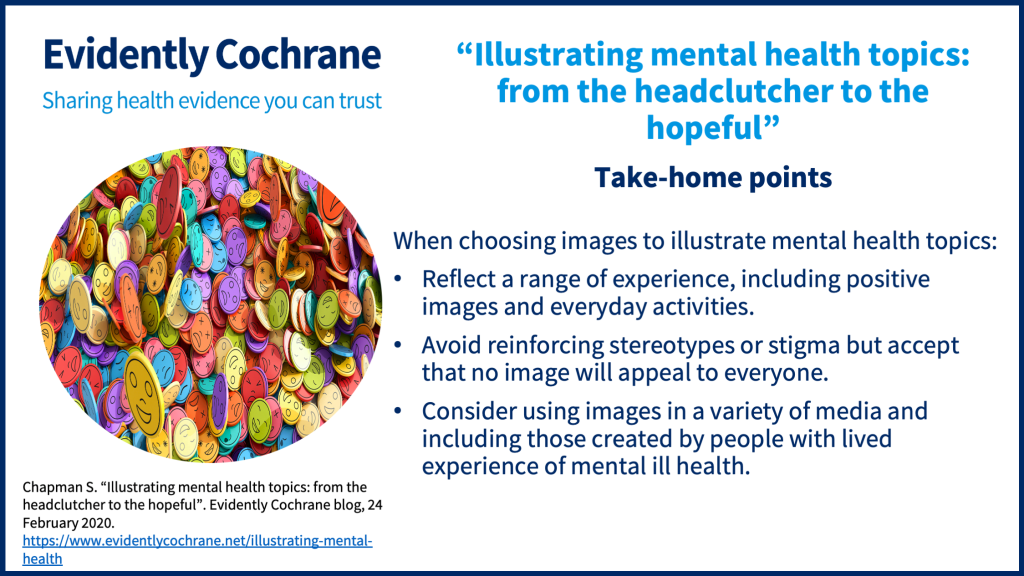 Join in the conversation on Twitter with @SarahChapman30 @Cochrane_CCMD @CochraneUK #YoungMindsMatter or leave a comment on the blog. Please note, we will not publish comments that link to commercial sites or appear to endorse commercial products.