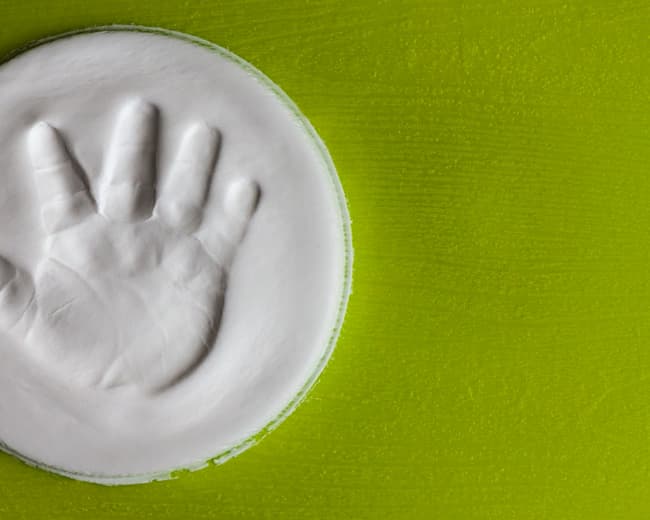 In this blog for maternity care providers and families, Dr Aleena Wojcieszek, clinical epidemiologist, science communicator, and honorary research fellow at the Australian Centre of Research Excellence in Stillbirth (Stillbirth CRE), and Ms Susannah Hopkins Leisher, mom to stillborn son Wilder Daniel (13 July 1999), PhD student in epidemiology at Columbia University, and chair of the International Stillbirth Alliance, look at an overview of Cochrane evidence on antenatal interventions to prevent stillbirth and perinatal death. 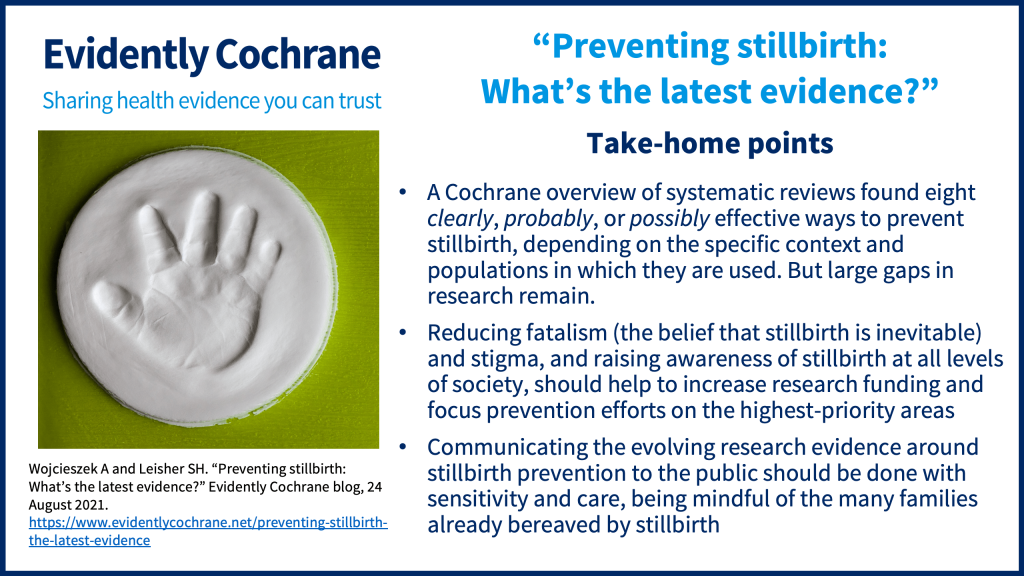 We’ve often been asked by friends, family, and others, ‘what is stillbirth, exactly’?

In the general community, stillbirth is somewhat mysterious. People have some idea of what it is, and that it’s a horrible tragedy, but beyond that, it’s something most people have never really had to think about (thankfully).

So we tell our friends, family, and others that stillbirth is when a baby dies before or during birth. This is generally from the second half of pregnancy (e.g. 22 weeks or more), but the exact definition depends what country you live in.

But the big question we’ve been asked, a lot, is ‘how can we stop it’?

There are many different causes of stillbirth, and sometimes there’s more than one single cause. Diagnostic tests can often find the cause, but these tests are not always used. Worse yet, some stillbirths are unexplained even with a range of diagnostic tests. To understand these deaths, we need to do more research.

With many causes of stillbirth, there are a lot of potential strategies (also called ‘interventions’) to try to prevent it. Some of these interventions are listed in Cochrane Reviews, as well as the new Cochrane Special Collection on Stillbirth.

So has this evidence left us any clearer on how to prevent stillbirth?

A much needed summary of Cochrane evidence

This 2020 overview of reviews by Erika Ota and colleagues takes a big-picture look at how to prevent stillbirth and perinatal death (a term used to refer to both stillbirth and newborn death) at the global level, according to the best available Cochrane evidence.

This evidence relates to the general population of pregnant women (women with no particular pregnancy risks, also called ‘low risk’ women), so it’s widely relevant to maternity care providers and families. (Ways to prevent stillbirth in women who were already at higher risk of stillbirth due to specific pregnancy risks, including previous stillbirth, were not the focus of this overview. You can read our previous blog on pregnancy after stillbirth here).

This overview comprehensively summarises the existing Cochrane Reviews on interventions during pregnancy (‘antenatal interventions’) for preventing stillbirth and perinatal death. Each review is like an individual brushstroke of an oil painting. The individual strokes make an important contribution, but we need to step back to see all the strokes at once and take stock of the whole picture.

That’s exactly what this overview does: provides the whole painting. It pulls together all the brush strokes, in trying to answer that question: ‘what are the best ways to prevent stillbirth’? Most importantly, it shows the many gaps in the painting itself, and where the brush strokes are not very clear.

What did the overview find?

This overview found 43 relevant Cochrane Reviews, which reported the evidence on 61 antenatal interventions that might prevent stillbirth.

It’s also important to state that most of the evidence came from only a small number of trials, some of which are now very old, so we need to be careful in interpreting the findings.

What interventions are effective in preventing stillbirth?

The overview shows clear evidence that:

The overview shows that other interventions are probably effective in reducing the risk of stillbirth, also depending on the specific context and populations in which they are used:

Another three interventions were possibly effective in preventing stillbirth or perinatal death:

Was anything found to be harmful to women or babies?

Evidence from low- and middle-income countries showed that having fewer antenatal care visits (i.e. fewer than a woman would usually have under ‘standard maternity care’ in those settings) probably increases the risk of perinatal death. The typical number of antenatal visits is already low in these settings, so reducing visits further seems clearly problematic. Reducing the number of visits made little to no difference to the risk of perinatal death in high-income countries, where women routinely have more visits.

What about other ways to reduce stillbirth, based on newer and other sources of evidence?

We now know that going to sleep on your side during later pregnancy is linked with a lower chance of stillbirth. It wasn’t assessed in this Cochrane overview as there weren’t any such reviews on the topic. This is because the interventions across the included reviews were all rigorously tested using a method called ‘randomised controlled trial’ (where the research participants are randomly assigned to receive the intervention or not).

But it’s ethically problematic to run randomised controlled trials on topics like sleep position in pregnancy: how can we ask one group of pregnant women to not go to sleep on their side for research, when we already have reason to believe this is safest for unborn babies?

So while there aren’t any Cochrane Reviews on the question (and probably never will be), going to sleep on your side is recommended by Tommy’s (UK), and by the Centre of Research Excellence in Stillbirth (Australia) through its Safer Baby Bundle initiative. The existing evidence shows that sleeping on either side is safe. Waking up on your back is OK, just roll over and settle to sleep again on your side.

Healthy babies continue to move throughout late pregnancy and during labour. So if movements change, it could be a sign that the baby is unwell. Women who report that their their baby’s movements have decreased have a moderately higher chance of stillbirth.

Since then, a large trial in the UK and Ireland published in 2018 (the AFFIRM trial) showed that a package of care to promote awareness and better management of decreased fetal movements did not lead to women having fewer stillbirths.

But the answer is not yet definitive. Evidence from the My Baby’s Movements trial in Australia and New Zealand will be available soon.

In the meantime, being mindful of movements, reporting any concerning changes in movements to care providers, and then checking on the baby’s health as per clinical guidelines, remains important advice for women and maternity care providers (see guidance here and here).

A 2017 Cochrane Review concluded that psychosocial interventions (such as counselling, providing feedback, and giving incentives) can help women to stop smoking in pregnancy. It also showed psychosocial smoking cessation interventions may reduce the chance of babies being born with low birthweight or needing to be admitted to neonatal intensive care after birth.

But the review found no clear evidence that psychosocial smoking cessation interventions reduced stillbirth, reported in the Cochrane Overview. This was the case even though there is already conclusive evidence that smoking during pregnancy is a significant ‘risk factor’ for stillbirth (something that increases the chance of stillbirth happening).

This is yet another research conundrum. But it helps to highlight the difference between known causes or risk factors for stillbirth – like smoking – and known interventions that are effective in reducing or removing those causes or risks. From poor quality studies, to differences in how things are measured across studies, failure to include stillbirth as a study outcome, small sample sizes (which often means we can’t detect changes in stillbirth rates), inability to do randomised controlled trials, and more, there are many reasons why scientific evidence might fail to clearly identify interventions that do work to reduce stillbirth.

There’s more to do…

We found the same lack of evidence in our Cochrane Review on ways to prevent stillbirth from happening again in subsequent pregnancies (read our other blog here).

It’s clear that stillbirth research has so far been insufficient. This is due to many factors including fatalism (the belief that stillbirth is inevitable), stigma (the unwillingness to talk about deaths of babies), lack of knowledge about the magnitude of the problem, and lack of understanding of the multiple ‘returns on investment’ in stillbirth prevention.

This has been well recognised in Australia, which now has a National Stillbirth Action and Implementation Plan to reduce late-gestation stillbirths and improve care for families when a stillbirth occurs. This plan was developed after the Australia Government established a Select Committee on Stillbirth Research and Education in 2018, to inquire into the future of stillbirth research and education in Australia. In no other country has there been a similar response to addressing the issue of stillbirth.

This is where national and international advocacy is so valuable.

The International Stillbirth Alliance (ISA) and its partners carry out global collaborative work to raise awareness of stillbirth and newborn death and advocate for increased attention to, investment in, and action for, research and prevention.

We welcome parents, care providers, researchers, and others who are interested in contributing to global stillbirth research and advocacy to join the ISA. Find out more and contact us at ISA’s website. You can read also more about our work in ‘Further information and resources’.

As we continue to learn more about how to prevent stillbirth, it’s important to acknowledge the many families already bereaved by this tragedy.

When it comes to having a safer pregnancy, messages about what to do and what not to do to can be triggering for these parents. “What if I had done this or not done that?” “What if I knew then what I know now?” These are questions some parents may ask themselves. It’s important to communicate the research evidence with sensitivity and care.

If you are a parent of a stillborn baby, we’re so sorry.

The science is ongoing and the evidence for how to prevent stillbirth will continue to evolve. In the years to come, quality research will mean that fewer families than ever before will go through the heartbreak of stillbirth.

Join in the conversation on Twitter with @aleenawoj @SusannahLeisher @CochraneUK @CochranePCG or leave a comment on the blog.

Dr. Wojcieszek reports receiving consulting fees from the Australian Centre of Research Excellence in Stillbirth, The University of Queensland (Stillbirth CRE) outside the submitted work; she is an honorary research fellow at the Stillbirth CRE and member of the International Stillbirth Alliance (ISA).

Dr Aleena Wojcieszek is a clinical epidemiologist and science communicator. She works internationally as an independent consultant in maternal and newborn health. She is an honorary research fellow at the Australian Centre of Research Excellence in Stillbirth (Stillbirth CRE) and a member of the International Stillbirth Alliance (ISA).