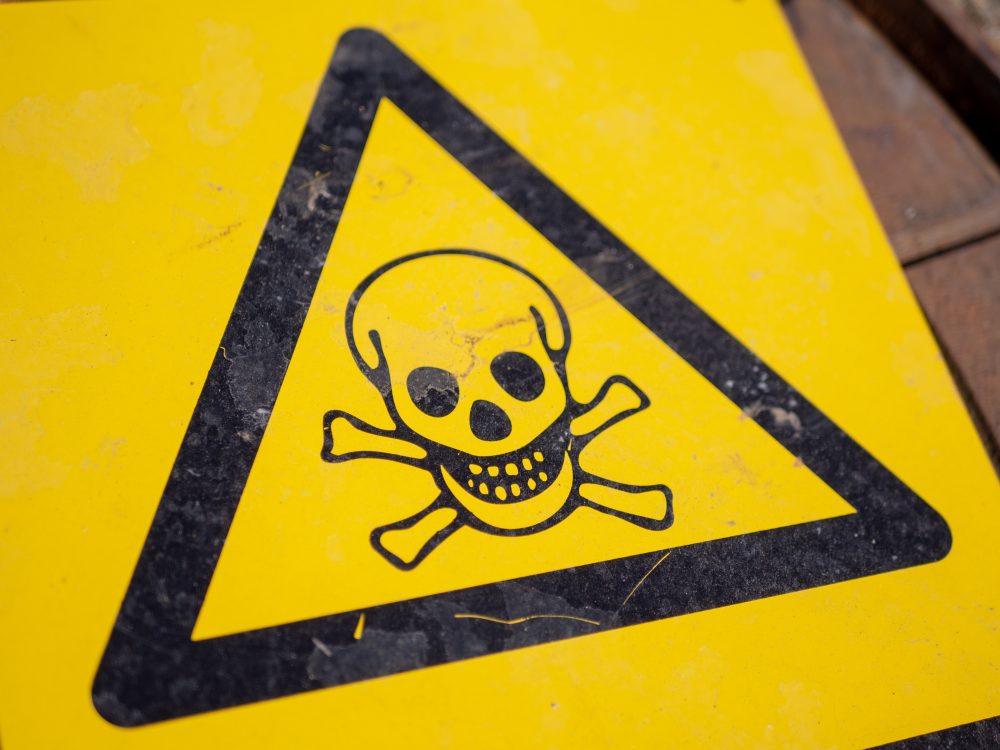 In the third blog of our special series on Evidently Cochrane: “Oh, really?” 12 things to help you question health advice, Selena Ryan-Vig, Cochrane UK’s Communication and Engagement Officer, explores some cautionary examples which remind us that all treatments have potential harms.

“Dangerous” and “irresponsible”. That’s how Donald Trump’s comments about treating coronavirus have been described by doctors and scientists [1]. Last week the US president suggested that injecting disinfectant might be a possible treatment for the virus. Warnings from health professionals, scientists and product manufacturers in response were emphatic: ingesting or injecting disinfectant could do serious harm. Nonetheless, in the wake of Trump’s comments, emergency hotlines in the United States reported a spike in calls about dangerous disinfectant use. Trump said he “can’t imagine why” his comments could have sparked this response [2]. In doing so, he failed to acknowledge that people in need or desperation may hope that – even the most outlandish – treatments will work, while downplaying, ignoring or failing to understand potential harms.

Aside from Trump’s suggestion, disinfectant was never intended as a treatment and so this may be a particularly extreme example. However, Trump’s ill-founded comments are a timely reminder that any treatment – from the most unusual to those that are widely used – may be harmful. Few treatments are 100% safe. Making ill-informed choices could mean that, at best, we may waste time and money on treatments that have never been shown to be useful. At worst, we may opt for treatments that harm.

1. Just because a treatment is widely used, doesn’t mean it’s entirely safe and without potential harms

As the most-commonly used painkiller in the world, paracetamol is our ‘go-to’ for many acute and chronic pain conditions, yet concerns about its harms have grown [3]. The harmful effects of over-dosing on paracetamol, whether accidentally or intentionally, are widely known [4], but what about when we use it at recommended doses, over a long period of time?

Andrew Moore, who has authored over 200 systematic reviews, many on pain, explored the evidence on paracetamol in this blog [5]. He outlined evidence linking paracetamol with an increased risk of a number of, relatively rare but important, harms. These include cardiovascular problems; gastrointestinal problems (such as stomach ulcers); as well as kidney and liver impairment. It is important to point out that the evidence base for the harms of long-term paracetamol use consists of many observational studies, which must be interpreted with caution [3].

Nonetheless, we have reason to take these concerns seriously. Not least because the benefits of paracetamol are increasingly being called into question. There is high-certainty Cochrane evidence, for example, that there is little or no difference between paracetamol and placebo for improving outcomes in people with acute low back pain [6]. Paracetamol is also unlikely to provide meaningful levels of pain-relief for the majority of people with a range of other pain conditions too, including osteoarthritis [7], cancer pain [8], acute postoperative pain [9] and migraine [10]. The widespread use of paracetamol might lead us to presume it is both effective and safe; the evidence challenges us on both fronts. 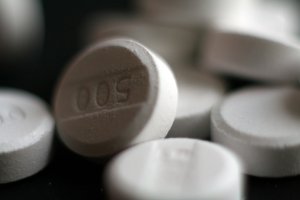 Every year, thousands of tonnes of paracetamol are purchased in the UK but there are important concerns about its safety, heightened by increasing doubt about its effectiveness [3]*.

2. Some harms may seem counterintuitive or unexpected; we can’t simply assume a treatment to be safe and should consider the evidence

Making assumptions about safety can be dangerous. Take the example of electric fans. Isn’t it obvious that electric fans are useful when the weather gets hot? Would you question whether they could actually do more harm than good during a heatwave?

A Cochrane Review on the use of electric fans during heatwaves painted a mixed picture [11]. Some studies suggested that fans may reduce health problems, others suggested that fans might actually make things worse. It is possible that, at extreme temperatures, fans may actually heat us up, by blowing hot air onto us, in turn exacerbating problems such as dehydration. Uncertainties about the health effects of electric fans remain. Nonetheless, this example is a reminder that harms may feel unexpected or unlikely. All interventions should be scrutinised: both their effectiveness and their safety. 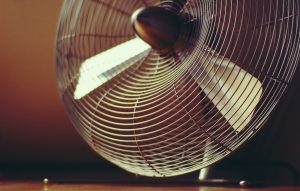 It’s important to scrutinise the safety and effectiveness of all interventions; even those we might not think could have possible harm.

Side-effects can be associated with any treatment. As such, making decisions about treatments may involve balancing the potential benefits against the potential harms. You might take into account, for example, the severity of the side-effects and how common they are. A person may be willing to accept some level of unpleasant effects if these are relatively mild and/or if the risk of more severe harms is relatively low.

An illustration of this comes from a Cochrane Review looking at whether Nicotine Replacement Therapy (NRT) is an effective and safe way to help people quit smoking [12]. NRT was compared with placebo or no NRT in 136 studies and 64,640 people. The review found high-certainty evidence that NRT in all licensed forms (gum, lozenges, patches, sprays, inhalers and tablets/lozenges) increases someone’s chances of successfully quitting smoking. Chest pains and palpitations were rare and serious adverse events, such as stroke and heart attack, were extremely rare. Nonetheless, less severe side-effects were common. For example, up to 54% of people using a patch reported skin sensitivity and irritation. The reactions were usually not severe enough to prompt people to stop taking the treatment.

Weighing up whether the benefits of treatments outweigh their risks is an important part of the decision-making process. This may be something to explore with your healthcare provider.

4. It is essential that information about treatment harms is clearly reported in studies, yet reporting is poor and inconsistent

An interesting example here is macrolide antibiotics (macrolides), which are among the most commonly used antibiotics worldwide. A Cochrane Review of 183 studies with a total of 252,886 people assessed the adverse effects of macrolides when used for the prevention and treatment of a wide range of infections [13]. It found moderate-certainty evidence that people treated with macrolide antibiotics are probably more likely to experience nausea, vomiting and abdominal pain and there was low-certainty evidence that macrolides may carry a higher risk of diarrhoea, hearing loss and taste disturbances. However, 1 in 10 of the studies provided no information about harms; leaving us uncertain about whether or not, and to what extent, the people in those studies experienced side effects. However, even in those studies that did provide this information, the review authors highlighted the poor and inconsistent reporting about one very important adverse event in particular: antimicrobial resistance.

Antimicrobial resistance is one of the biggest global health problems of our time, with antibiotic (mis)use being a key driver. Resistance could see people developing infections which cannot be easily treated with antibiotics, meaning that even common infections or simple wounds could become fatal [14]. Yet despite the importance of the problem, and despite including a large number of studies (183), the authors stressed that “very limited information was available to assess if people treated with a macrolide antibiotic were at greater risk of developing resistant bacteria than those treated with placebo”. This leaves patients and healthcare professionals in the dark; the full picture regarding the potential risks of using this type of antibiotic is unclear.

Concerns about poor reporting of harms are not confined to the issue of antibiotic resistance, or this clinical topic. Across a range of conditions – from hypertension to epilepsy – the standard of reporting of harms-related information has been found to be inadequate [15]. When we do not have enough, good-quality information about possible adverse effects of treatments, this compromises our ability to balance the trade-offs between benefits and harms. 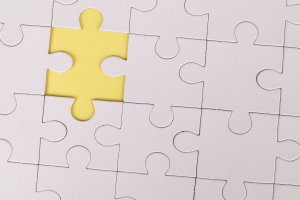 Studies that fail to adequately report information about harms of treatments are like incomplete jigsaws; people making treatment decisions don’t have the full picture about potential benefits and harms.

Questions about safety should be asked about all interventions

Trump’s latest suggestion about treating coronavirus prompted such outrage and concern because disinfectant is a product with such obvious, severe harms. Yet, particularly when treatments are widely established or seemingly innocuous, it can be easy to forget that any intervention might have harmful effects to some degree. From the paracetamol in our cupboards to the electric fans in our homes, we should consider the evidence, and question not only whether something works, but whether it is safe. 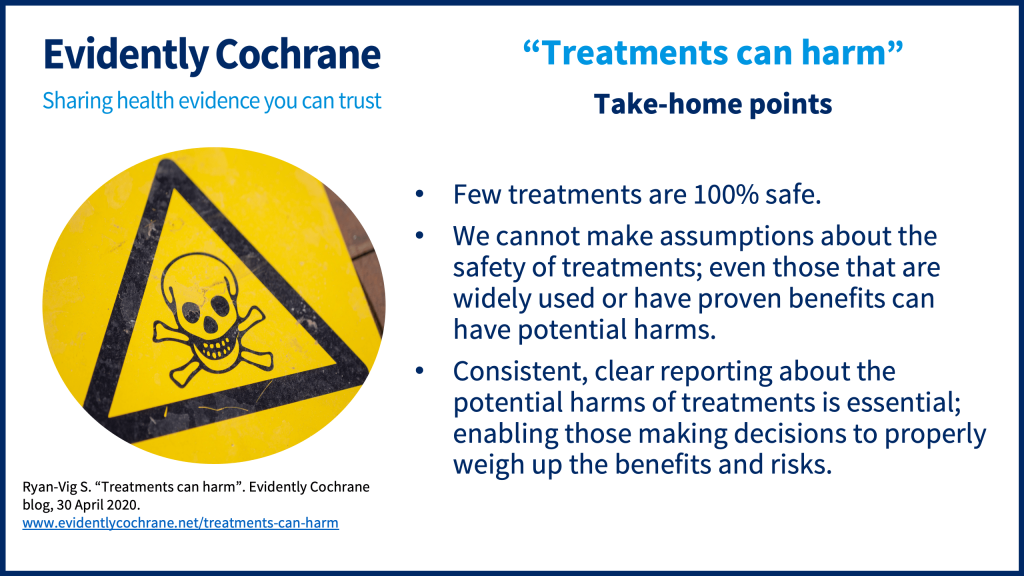 Join in the conversation on Twitter with @CochraneUK and #OhReally or leave a comment on the blog. Please note, we will not publish comments that link to commercial sites or appear to endorse commercial products.

Selena Ryan-Vig has nothing to disclose.

Selena Ryan-Vig is a Knowledge Broker at Cochrane UK. Her role involves sharing Cochrane evidence in accessible ways, managing Cochrane UK's website and social media accounts, and producing newsletters. With a colleague, Selena delivers interactive sessions to students from Years 10 to 13 to teach about evidence-based practice and to encourage critical thinking, particularly around healthcare claims made in the media. She also co-delivers talks for students to raise awareness of Cochrane and reliable, evidence-based resources. She has a psychology degree from the University of Bath. During her degree, she worked for a national charity which provides support for young women.

Treatments can harm by Selena Ryan-Vig