Sex and chronicA health condition marked by long duration, by frequent recurrence over a long time, and often by slowly progressing seriousness. For example, rheumatoid arthritis. More pelvic pain was one of the things people talked about, at a workshop to discuss which treatmentSomething done with the aim of improving health or relieving suffering. For example, medicines, surgery, psychological and physical therapies, diet and exercise changes. More outcomesOutcomes are measures of health (for example quality of life, pain, blood sugar levels) that can be used to assess the effectiveness and safety of a treatment or other intervention (for example a drug, surgery, or exercise). In research, the outcomes considered most important are ‘primary outcomes’ and those considered less important are ‘secondary outcomes’. More mattered to them. @sally_crowe tells the story. 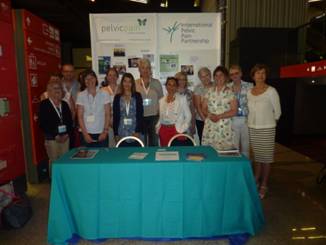 During a sultry June weekend in 2015, forty three people came together to talk about what matters to people living with chronic pelvic pain.  I co-facilitated the workshop, which was taking place at the second World Congress on Abdominal and Chronic Pelvic Pain (CPP) in Nice, France.  Of the 43 participants, 21 were women living with chronic pelvic pain (with different causes and conditions), 17 were health professionals and/or researchers, and helping with the practicalities were two volunteers from the UK Pelvic Pain Support Network.  There were three observers from the workshop sponsor, Grunenthal.  The workshop was the co-production of the International Pelvic Pain Partnership (details at the end of this blog) and enthusiastic clinician researchers from Edinburgh, Birmingham, South Tees and Oxford, and everyone was there in a voluntary capacity.

The aim of the workshop was to explore and discuss outcomes for day to day treatments for CPP, self management and research; including patient reported outcomes (PRO) and core outcome sets (COS).  We worked in small and large groups, refining outcome areas and working towards prioritization of outcomes that both patients and health professionals/researchers could agree were important to measure in CPP treatment, care and research.  The results of the discussion were framed in four categories of outcomes; high consensus, moderate consensus, some consensus and suggestions for new outcome areas.

it’s easy to make assumptions about what outcomes matter…

The outcomes with high consensus were quality of life, psychological and fatigue.  In the next category of moderate consensus and at number 7 was sexual activity, nestled in with social activities, pain and adverse effects of treatments.  Reflecting on these results one is left with feeling that it is easy to make assumptions about what outcomes matter to people living with chronic conditions.  Many readers may have assumed that pain would be a top outcome and that sexual activity could be considered a minor outcome, not so on both counts….. 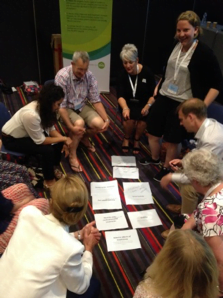 What was also striking about the day was the relative ease with which participants talked about sex.  An intention of the day was to create an atmosphere in the room that was relaxed, productive and respectful between participants, so that ‘difficult’ discussions could be had, and diverse opinions and experiences heard, and tolerated.

Groups were also encouraged to think about and discuss the wording of the outcomes under focus, and this generated some fascinating insights, not least around sex.  Sexual activity and function (which seemed the common parlance in the professionals) quickly developed into broader definitions of sexual health, sexuality and intimacy, sexual relationships and sexual orientation.  Fertility was discussed as a separate outcome.  It was acknowledged that sex is a personal affair and what might be important for one person may not matter to others (cue much laughter!).

Eventually the group suggested a general rewording of ‘sexual activity’ to ‘sexuality and relationships’ to embrace the emotional and relational aspect of sex, and reduce the inference that sexual activity/function is a ‘mechanical’ process.  It was astounding how much some participants were able to share about sex and chronic pelvic pain, and also heartening to see the respect accorded them in doing so.  There was also much laughter in the room and whilst this seemed to help smooth the dialogue, it also highlighted the nervousness with which we approach talking about sex.

Let’s not sideline talk about sex

My work with other groups of people with chronic, life- long and life limiting conditions suggests that sex can be an important part of self identity, self worth and quality of life.  Indeed in one of the very first James Lind Alliance research Priority Setting Partnerships in Schizophrenia the relationship between sex and side effects of anti psychotic drugs was number 4 in the top ten research priorities.

So let’s not sideline talk about sex, either in treatment, care or research. It is entirely possible and profitable to encourage discussion and debate that leads to better shared understandings that can inform health treatments, care and research.

This guest blog is one in a special series of blogs on #theproblemwithsex . Read more blogs from the campaign here.

“The International Pelvic Pain Partnership is committed to substantially improving education, early and accurate diagnosis, effective treatment/management, and realistic prognosis for neuropathic chronic and visceral pelvic and perineal pain. We intend to increase the participation of the International Pelvic Pain Partnership in research and services development, so that these objectives are achieved in the next decade” For the IPPP it is all about expert patients talking and working with specialist clinicians.

Sally is a Director at Crowe Associates Ltd, which provides consultancy, facilitation, training and project management for patient and public involvement in health services and research. She is a member of Cochrane with a particular interest in priority setting and consumer involvement. Sally has been a member of the British Medical Journal's Patient Panel since its inception, and is on the Editorial Board of BioMed Central's Research Involvement and Engagement Journal.

Let’s talk about sex and chronic pelvic pain: it matters! by Sally Crowe