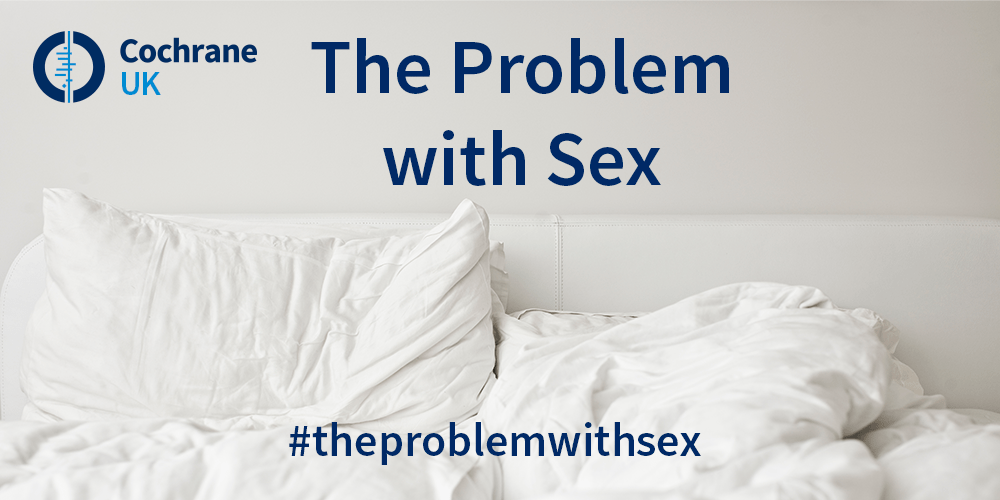 Introducing Cochrane UK’s special blog series #theproblemwithsex, which aims to lift the lid on sex and chronic health conditions, on the lack of good evidence for treatments, challenges around talking about sex, and on what can be done to change things for the better.

We have a problem with sex. Lots of problems, actually. It’s easy to think that sex is everywhere in the media. Sex sells, right? But I get the impression that there’s very little discussion about the sexual problems (let’s not talk in general terms about ‘dysfunction’ – a terribly clinical word with a whiff of judgement about it) experienced by many, many people, associated with long-term health conditions and treatments.

What do we hear about sex and cancer, diabetes or mental health problems? When does the person attending an appointment to discuss their medication or latest test results get to talk about sex, which might be uppermost on their mind but the thing they feel least able to mention? If they do, will their health professional be ready for that conversation, or even initiate it? Where might that discussion go? Are there evidence-based treatments that could be considered?

Why are we talking about sex?

At Cochrane UK, we started talking about all this eighteen months ago, when we saw a Cochrane review on interventions for sexual problems among people with chronic obstructive pulmonary disease (COPD). Cochrane reviews pull together the best available evidence on a topic, after extensive searching for research published across the globe. This review found just two relevant studies, involving 48 men suffering from erectile problems. The review authors highlighted two very important things in summing up this work. Firstly, that there isn’t any reliable evidence to tell us what might help improve sex for people with COPD, and what might make things worse. Secondly, at the moment, help for such patients can only rely

This needs to change. This review did involve patients, and they made it clear that sex matters. There are helpful suggestions for what future research needs to address, a wish list that provides a stark contrast to what’s available now.

Let’s focus on what matters to people

Since then, we’ve seen Cochrane reviews published on other health conditions, and it’s the same old story. They have shown up huge gaps in the evidence on treatments for sexual problems and a failure to address things that matter to people.  Like vaginal dilator therapy, which is standard British practice for women having pelvic radiotherapy but for which a Cochrane review finds no evidence from randomized trials and highlights other problems with research in this area including the lack of a “globally useful, validated tool for measuring the harm inflicted by encouraging dilation” (we have a fantastic blog on this review, and what’s happened since, here. Or like the limited research on vaginismus, uncovered by this review, which defines treatment success as penetration, with no consideration of anything other than the mechanics of it.

We need to break the silence, so that people can have honest discussions with their health professionals and therapists about the treatments on offer; so that there is clarity about the gaps, and so that future research can explore the wide range of possible treatments and focus on outcomes that matter to people.

Breaking the silence on #theproblemwithsex

Over the next fortnight, we will be exploring this important topic through a series of guest blogs. We’ll also be co-hosting a tweetchat with @WeNurses on 6th April at 8pm. Chat details here.

We really want to hear what you’ve got to say too, so please follow the series #theproblemwithsex and join in the conversation, here on Evidently Cochrane, with @CochraneUK on Twitter and on Facebook. I’m on Twitter @SarahChapman30

Sarah Chapman has no conflict of interest to disclose.

Vaginismus is ruining sex. Research must move beyond penetration

Still being sexual in chronic illness

The problem with sex: is our reluctance to talk about it harming patients? by Sarah Chapman