A blog about the The People’s Trial, a bold new project from The Health Research Board – Trials Methodology Research Network (HRB-TMRN) at the National University of Ireland, Galway, which invites members of the public to create and run a fun online clinical trial.

This trial has finished. You can read about it in this open access publication: Does reading a book in bed make a difference to sleep in comparison to not reading a book in bed? The People’s Trial – an online, pragmatic, randomised trial and below is a infographic summarising the results. (You can also view, and enlarge, the summary results in a pdf). 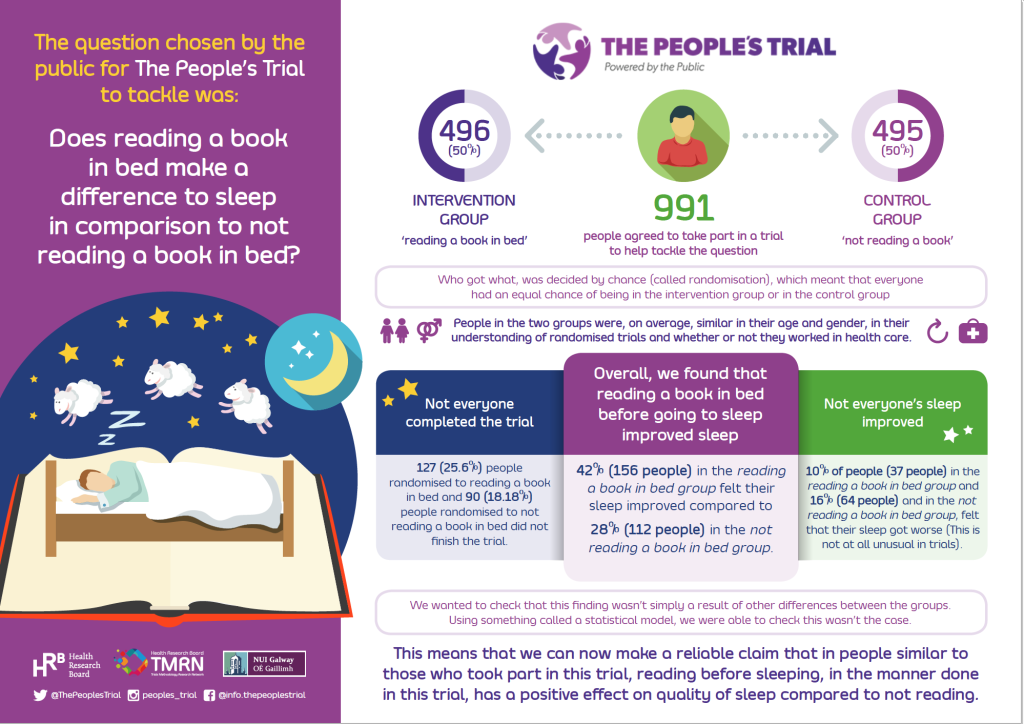 For information, below is the original blog which was written at the time the trial was launched.

The People’s Trial is an online project that invites members of the public to create and run a type of clinical trial – a randomised trialA trial in which the people taking part are randomly divided into groups. A group (the intervention group) is given the intervention being tested (for example a drug, surgery, or exercise) and compared with a group which does not receive the intervention (the control group). – alongside researchers, but also to take charge of it. A trial for the public and, crucially, by the public. This is YOUR trial.

The People’s Trial is a perfect excuse to go on the internet in the name of science. No smelly laboratories involved. Just an opportunity to be part of something new that should be fun, interesting and useful.

In place of the usual treatments in clinical trialsClinical trials are research studies involving people who use healthcare services. They often compare a new or different treatment with the best treatment currently available. This is to test whether the new or different treatment is safe, effective and any better than what is currently used. No matter how promising a new treatment may appear during tests in a laboratory, it must go through clinical trials before its benefits and risks can really be known., you might be investigating bananas, or sunhats, or singing in the shower. After all, a treatmentSomething done with the aim of improving health or relieving suffering. For example, medicines, surgery, psychological and physical therapies, diet and exercise changes. (or ‘intervention’) is anything that is done to improve health, so if you, say, cuddle the dog to help you get to sleep or to lift your mood, that’s a treatment!

If you have a burning question you want answered, this could be your chance. But first things first.

What is a randomised trial?

Clinical trials are used to test new treatments to find out whether they are safe and how they compare with other treatments, in terms of both benefits and harms. The best way to make a fair comparison is in a randomisedRandomization is the process of randomly dividing into groups the people taking part in a trial. One group (the intervention group) will be given the intervention being tested (for example a drug, surgery, or exercise) and compared with a group which does not receive the intervention (the control group).   trial, where people taking part are put into treatment groups by the computer equivalent of flipping a coin.

Why do a People’s Trial and what’s involved?

This is a great opportunity for people to learn about randomised trials, how they can answer a clinical question, and why they matter, by being involved in one in a unique way. In an age of misinformation, spin and ‘Dr Google’, it is really important that people are able to think critically about the health claims that confront us daily. Taking part in The People’s Trial will help people gain the knowledge and skills to do that.

It will also help researchers understand more about how best to involve people in future trials at all stages, from prioritizing research questions to sharing the results in ways that are useful.

Members of the public, supported by researchers, will design and run The People’s Trial, using different types of online participation and interaction that will include live video events and online decision making.

The first thing will be to come up with a question for the trial. “Does eating cheese give you nightmares compared with not eating cheese?” for example. You can find out how to submit a question here.

‘Citizen science’ is far from a new thing, even if we coined the phrase as recently as the 1990s. Chinese citizens have been helping to track outbreaks of harvest-destroying locust migrations for around 2000 years, and anyone that’s taken part in projects like the BBC’s Gardenwatch has already experienced being a citizen scientist.

The People’s Trial is doing something new in giving members of the public control of a randomised trial, from deciding on a question to answer onwards.

Who is behind The People’s Trial?

Ready to find out more and be part of it?

Taking part at the start doesn’t commit you to continuing, but hopefully you’ll want to!

Twitter @thepeoplestrial, Facebook, Instagram to keep up to date with opportunities to participate and live events. You can also email  info@thepeoplestrial.ie if you have any questions.

Declaration of interest: Sarah Chapman is a member of The People’s Trial team.

The People’s Trial: your chance to be a scientist in a fun online trial by Sarah Chapman