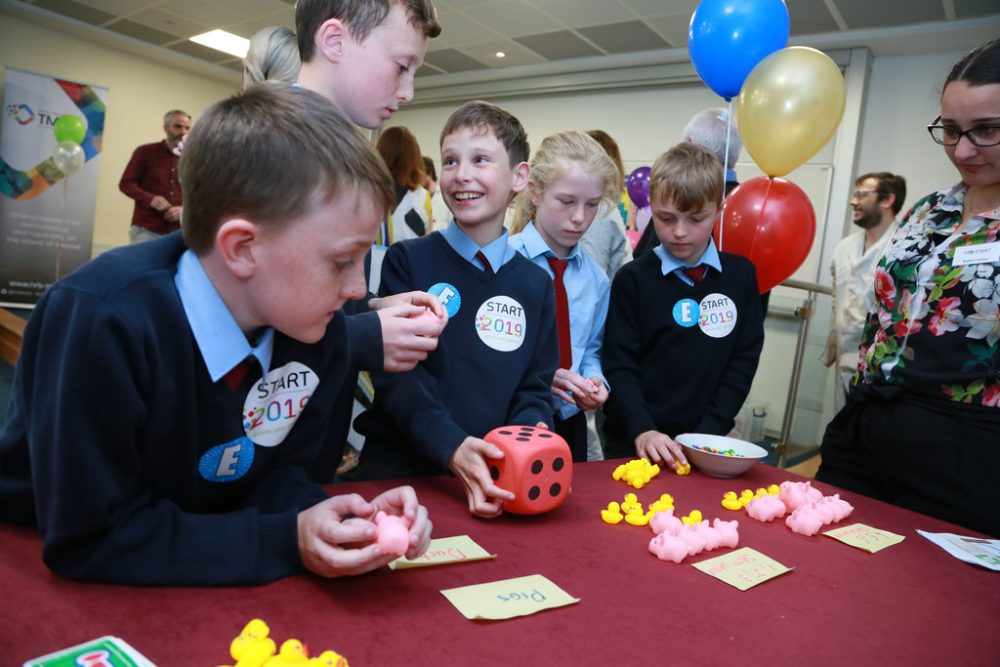 School children in Ireland have run and presented their own randomised trials in the innovative START competition. Here’s what they achieved and why this matters.

If you’ve ever taken part in a clinical trial, I hope you were told very clearly what would be involved when they asked for your agreement to take part; I hope you felt valued and looked after; and I hope you were told how the trial went and what the results were. If you’ve ever read or done a systematic reviewIn systematic reviews we search for and summarize studies that answer a specific research question (e.g. is paracetamol effective and safe for treating back pain?). The studies are identified, assessed, and summarized by using a systematic and predefined approach. They inform recommendations for healthcare and research., where the results of clinical trialsClinical trials are research studies involving people who use healthcare services. They often compare a new or different treatment with the best treatment currently available. This is to test whether the new or different treatment is safe, effective and any better than what is currently used. No matter how promising a new treatment may appear during tests in a laboratory, it must go through clinical trials before its benefits and risks can really be known. exploring similar things are combined, I hope you could find out exactly how the trial was done – did they randomise people and how did they do that, for instance? What were they looking for and how did they measure it? What did they find and what did any of it mean?

It’s not always like this. It is really wonderful to see these things so very well done by young people at the very beginning of learning about clinical trials. By young, I mean primary school children, who have taken part in the fantastic Ireland-wide START competition, now in its fourth year. 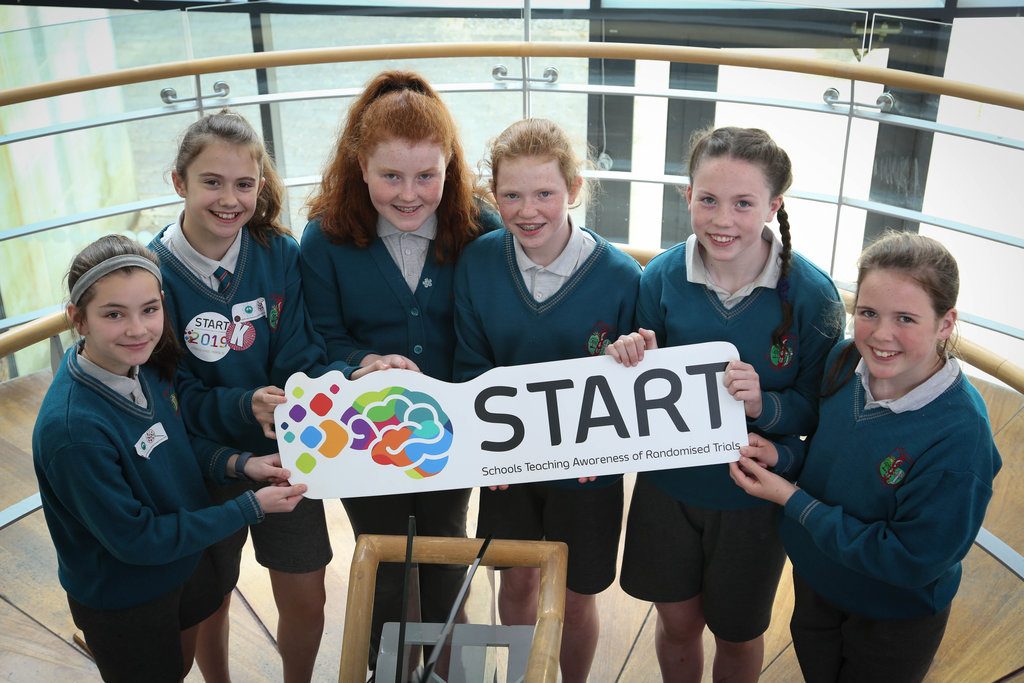 The Schools Teaching Awareness About Randomised Trials (START) initiative is the brainchild of a team from the National University of Ireland who had the imagination to ask “What if children were given the challenge of conducting a randomised trialA trial in which the people taking part are randomly divided into groups. A group (the intervention group) is given the intervention being tested (for example a drug, surgery, or exercise) and compared with a group which does not receive the intervention (the control group).? What questions would they ask? how would they handle the everyday obstacles that trialists encounter? Would they rise to the challenge?”

“This is exactly the opportunity given to Irish primary school children through the START initiative, developed by the Health Research Board – Trials Methodology Research Network (HRB-TMRN). The day job of the network is concerned with improving the conduct, reporting and analysis of randomised trials in Ireland, but every year the staff of this network welcome honorary junior trialists to the National University of Ireland to celebrate their efforts in conducting their very own randomised trial in the class room.

The initiative coincides with International Clinical Trials Day every year and allows the students to face the challenge of a randomised trial and report their findings in any format they like. The result is a fantastic range of unique and inspiring randomised trials, addressing questions relating to their own daily lives within the school, such as ‘Does reading aloud in class impact on the ability to retain information compared to silent reading?’ and ‘Can what pupils wear in school affect their results in written tests?’

When this competition was first developed it was described by primary school teachers in Ireland as a “new teaching tool” which not only brought the concept of randomised trials to the classroom, it also meets several aspects of the Irish primary school curriculum. Every year the entries to this competition bring new ideas, challenges and solutions. Some “trial teams” have reached out to involve the wider community or get older or younger classes involved to participate in their trial.

While providing a great opportunity for fun and cross-age peer learning, the ultimate goal of this competition is to help break down the perceived negative associations with randomised trials and help create awareness of their importance for better decision making.”

A special day with the top three schools

I was privileged to be invited to judge the entries, along with Andy Oxman, a health services researcher at the Centre for Informed Health Choices at the Norwegian Institute of Public Health, and Aisling Murray, teacher at St Joseph’s National School, Kinvara, whose year 6 class won the START competition last year.

Aisling reflects on the day we gathered to celebrate with the top three schools:

“It was a fantastic experience to participate as a judge this year. Memories of excitement and nerves came flooding back as the children arrived in Aras Moyola. It was lovely to see their faces light up in surprise as each school received a round of applause as they arrived. It is a simple thing to do but having been a teacher of a class on the receiving end last year it is hard to explain how much that gesture meant to each child and of course teacher, an acknowledgment of hard work and achievement by all.” 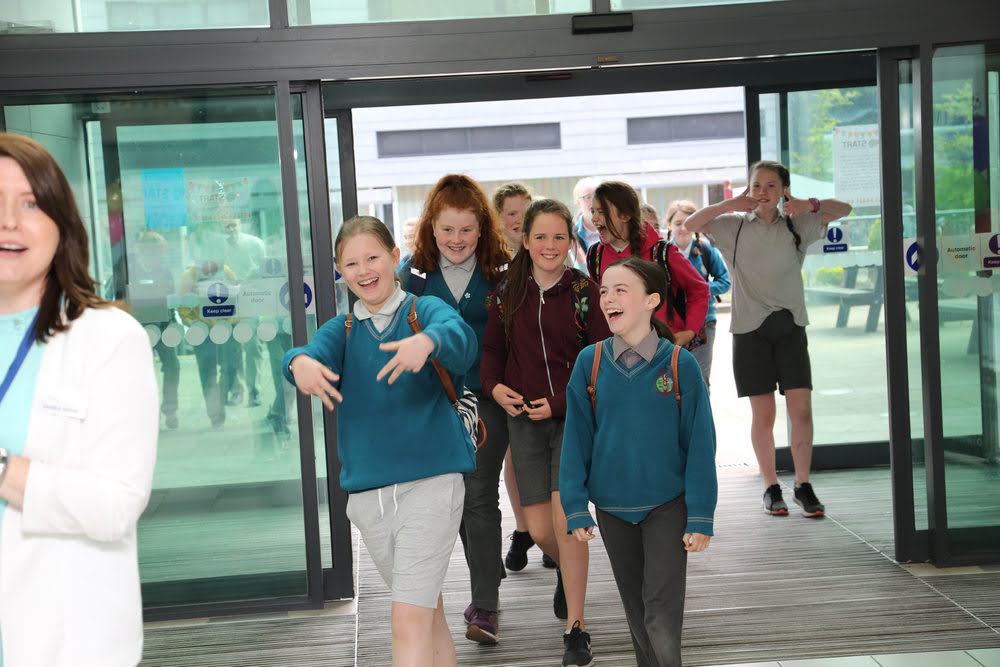 “This reception sets the tone for the day. A more welcoming, child centred atmosphere you would not find anywhere else. Everything is thought of and, without exception, everyone young and old has a great day.

The trip to NUIG [National University of Ireland, Galway] is a prize in itself, a day of experiences of all the Science departments that NUIG has to offer, from Kitchen Chemistry and Cell Explorers to demonstrating randomisationRandomization is the process of randomly dividing into groups the people taking part in a trial. One group (the intervention group) will be given the intervention being tested (for example a drug, surgery, or exercise) and compared with a group which does not receive the intervention (the control group).   and everything in between.” 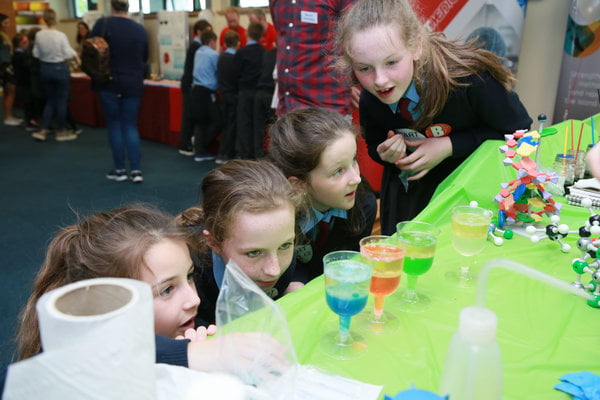 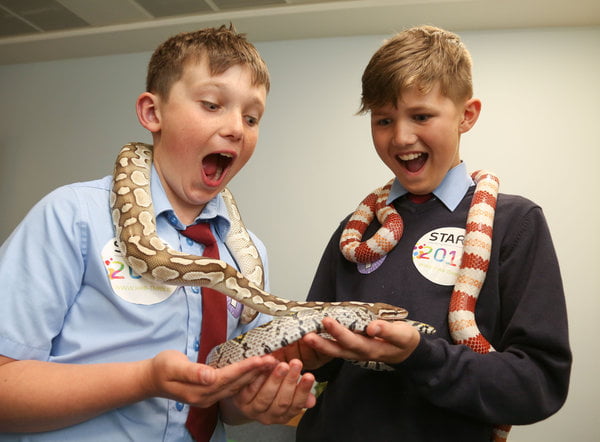 David and Leo from Ovens National School with python and milk snakes.

“After lunch we gathered in the lecture hall for the prize giving ceremony. A sea of enthusiastic faces looking down on us judges, wondering and waiting in nervous anticipation, silently and not so silently saying hurry up and stop talking and tell us who won. As an adult last year, I certainly felt the same, watching the clock tick on, how long more can we wait?!” 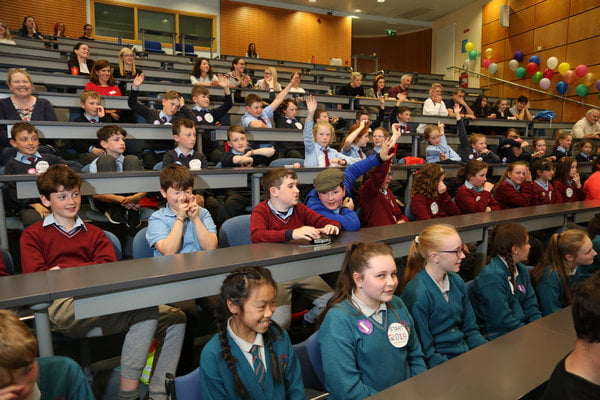 It might have felt a long wait, but we really wanted to share with the children our thoughts on what they’d achieved. Something that particularly delighted me was how creative the children had been in reporting their trials, embracing popular formats such as podcasts and using different media to enable people to access information about their trials in different ways.

We had a really tough job choosing between them, but here are our top three schools.

with their investigation of whether positive praise and encouragement affects running speed, Social Mobhi, Glasnevin, Dublin. 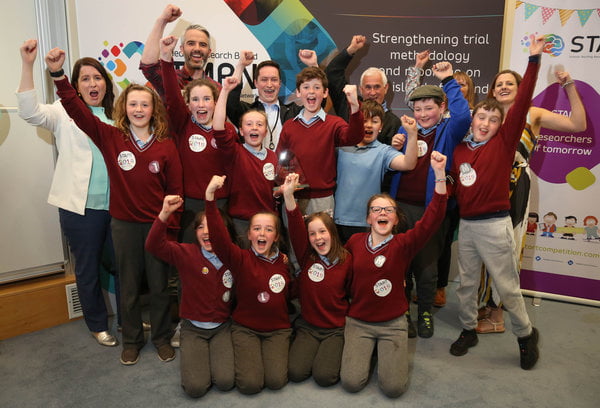 with their investigation of the effect of listening to music on test scores, Gaelscoil Eiscir Riada, Tullamore, Co. Offaly. 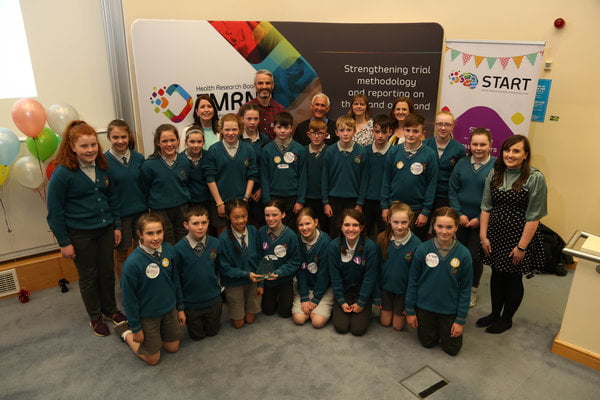 with their investigation of the effect on concentration of watching tv while doing written homework, Ovens National School, Ovens, Co. Cork. 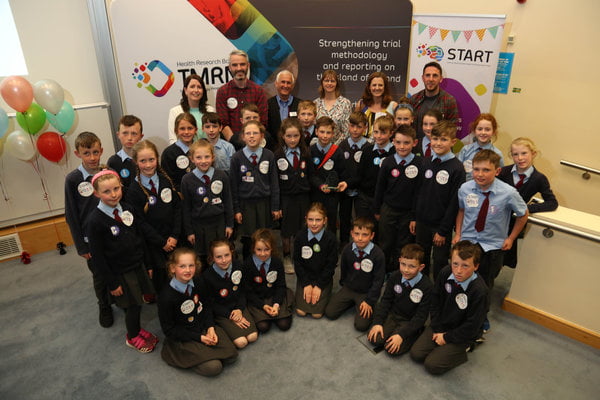 “The voice of the children shone through”

Teacher Aisling takes up the story again: “Although being the overall winners is a fantastic achievement, each school that was shortlisted in the top three were exceptional. In each entry the voice of the children rang out, they shared with us their decision making, their discussions, the problems they encountered along the way and the results they found. The honesty of telling us how the school bake sale slowed the time of the runners in one trial or how the original question based on chewing gum was changed as children wearing braces could not equally participate was captivating. The voice of children shone through in each project and this for me is the beauty of this competition. The pupils decide the trial question, the method of investigation, the tools and how to present the results and in doing so they gather a wide range of skills that will equip them as future learners.”

I couldn’t agree more. What the children have achieved, not only in the top three schools but all those who entered, is so impressive. We must hope that similar opportunities are created outside Ireland, while we look forward to what next year’s START competition will bring!

Full details of the competition, including the helpful START pack which includes a “step-by-step” guide for teachers and students who want to take part is available at www.STARTcompetition.com. Or you can follow the competition on twitter @STARTSchools

Thank you to @GalvinSadie and @MsMurrayKinvara for their contributions to the blog.

Photos all by Aengus McMahon.

Children can do randomised trials! START competition 2019 by Sarah Chapman