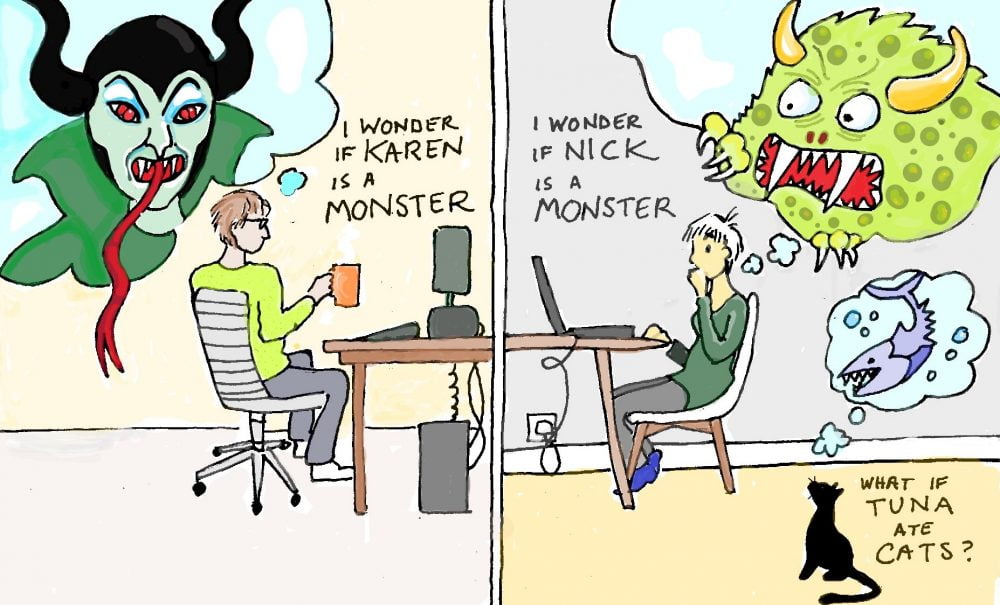 In this blog, Karen Morley reflects on her experience of becoming a consumer author on a Cochrane Review, using her lived experience of Obsessive Compulsive Disorder (OCD) and considers the questions it raised for her about Public Involvement in research (PI). Karen has also drawn all the illustrations in this blog. 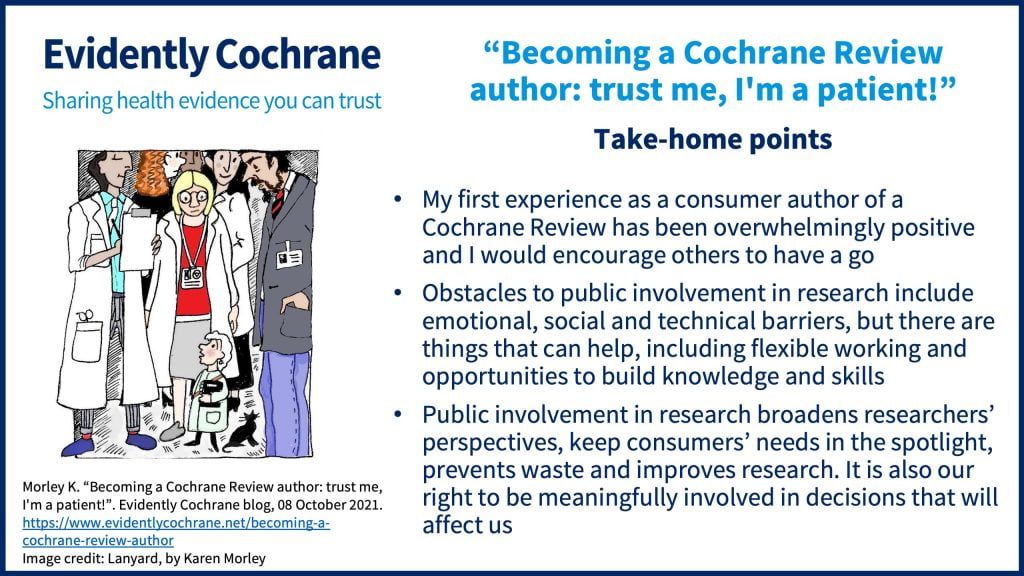 Who wouldn’t be thrilled to see their name on their first Cochrane Systematic Review?

Or to see a Tweet like my colleague’s on 8th September: “A new review authored by mental health professionals, researcher with lived experience and @crd_york researchers. And substantial, meaningful contributions from ALL authors. Would love for this sort of dream team to be the norm!” (@NoortjeUphoff)

This is a lovely tribute that nevertheless raises questions about the extent of good practice.

But let me begin by thanking all my colleagues for a great opportunity and encouraging my fellow consumers to consider trying it. (‘Consumers’ is a contested term but the one used by Cochrane to represent patients, carers and family members with first-hand experience of a healthcare condition: see the Evidently Cochrane blog, ‘What’s in a name: Patients, people and the power of words’  by Richard Morley and Sarah Chapman.)

Now I’m trying to see my experience in a wider context. I know there are contentious debates around public involvement (PI) and my views are developing – but this is where I am now.

What can help or hinder public involvement in research?

Social capital… but what about the seldom-reached?

I’ve been a volunteer with Cochrane Common Mental Disorders (CCMD) for a couple of years, now, and enjoyed the opportunities this brought, including peer reviewing (see my blog ‘Confessions of a rookie consumer peer reviewer‘, commenting on animations and helping create and deliver learning for and alongside its Voice of Experience College. It was the Managing Editor, Jess Hendon, who encouraged me to try my hand as a consumer author. Over time she has gained a good understanding of my interests and skills. I live close to CCMD’s office and was lucky enough to have already got to know her and three members of the author team. Without the social capital painstakingly built up by CCMD and my trust in their commitment to PI, I think I should have felt too insecure to get involved – and missed so much. What might it be like for an absolute beginner without this foundation? But then I consider the privileges that gave me this access. How can we remove the barriers that prevent the involvement of the seldom reached? 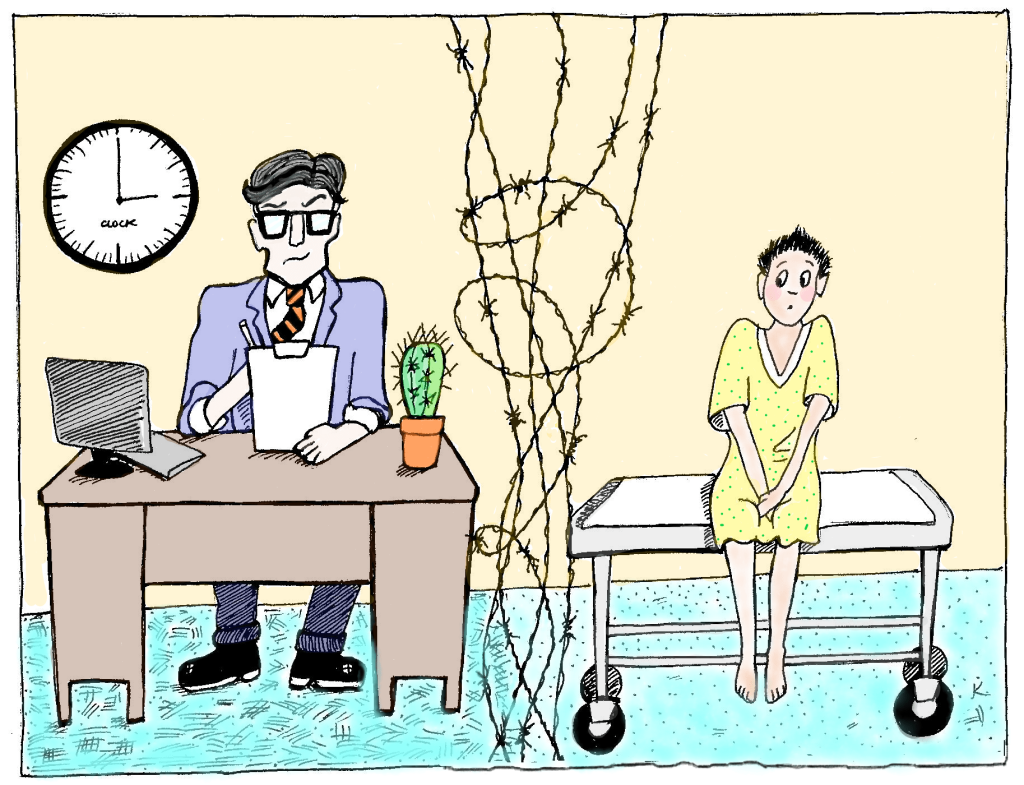 How can we remove barriers to public involvement in research, including those that prevent the involvement of the seldom-reached? Image credit: Barriers, by Karen Morley

Flexible working is essential for people who are ill

Another consideration is that healthcare consumers can be chronically or even critically ill. When work began, I was in the middle of an OCD episode and was far too anxious to take part. The team was very supportive. They told me I could contribute in any way I wanted to, as soon as I was ready. We met through Microsoft Teams – helpful, because I couldn’t leave the house. Remote working can sometimes remove barriers to involvement – but only for people with computers and computer skills.

Being able to do something useful

Despite their reassurances, I wasn’t there when the team first met, so when I joined, I couldn’t help feeling like an interloper. It was unsettling to be a complete novice and see competent people who took the processes and specialist language for granted. Would I just be underfoot? I felt better once I’d volunteered to proofread the protocol – and was delighted when the lead author accepted some of my suggestions. I offered to help screen the abstracts, using my acquaintance with Cochrane Crowd and felt relieved to have done something useful.

The team warmly invited and recognised my contributions and answered my questions. The fears I had about any potential power imbalance quickly evaporated. I wonder whether some sort of common induction process might help newcomers; an opportunity to break the ice socially as well as discuss what kind of contribution might be expected and what support is available. My colleagues were brilliant at removing barriers for me, whether emotional or technical. They gave me tutorials on software and sent Word versions of online documents. Cochrane already provides online learning resources for would-be authors but if there had been some consumer-friendly guides I should bothered my kind team members less, knowing they are hard-working people with busy lives.

Being part of an authentic, generous, humourous team

In the end the social interaction was one of the joys for me. It’s tempting to imagine the creation of reviews as mechanical, but these online meetings involved snatched breakfasts, bleary eyes, the demands of isolating children and shared anxieties: ‘I’m scared to press the button in case I delete everything!’ My colleagues were authentic, generous and humorous. They were also scrupulous, attentive to detail and dedicated and I admire them for their conscientious implementation of Cochrane’s exacting standards. The range of expertise in the group and the collaborative practices of unselfish team working were hugely important.

As someone who had begun as a consumer peer reviewer, it was fascinating for me to see more of the production process. Is there a way to give new consumer volunteers access to a glimpse of the entire review cycle in practice?

Peer reviewers only arrive in time to make final checks, but consumer authors have a chance to influence content. I arrived after the protocol had been written; now I’m looking forward to the chance to influence a review from its inception. Although perhaps that’s a misnomer. Consumers can jump into the research cycle at any point. How often do they? How can we routinely record their contributions and gather data for analysis?

Making my mark on this review

I was keen to say something about consumer involvement and the lead author included my point among the recommendations for research: ‘Sixth, efforts should be made to involve service users in future research endeavours. There are initiatives to involve the ASD community as stakeholders in setting research objectives (Roche 2020). For example, Autistica is an independent organisation which brings together people with ASD, carers and clinicians to prioritise research projects. Its inclusion was endorsed by one of the peer reviewers.

I looked for information about priority setting for ASD with OCD, looking at the James Lind Alliance’s Priority Setting Partnerships (PSPs). I could find nothing for co-occurring ASD/OCD but found one for autism alone from 2016. This was also reported in detail by the charity Autistica. This is their top priority: ‘Which interventions improve mental health or reduce mental health problems in people with autism? How should mental health interventions be adapted for the needs of people with autism?’ I was pleased that the systematic review could be seen as addressing an aspect of this.

There’s a worrying comment in the Autistica article: ‘currently there are no autism-specific treatments, as research has done very little so far to address mental health and autism together.’ That was in 2016 – I don’t know if the situation has improved. Certainly, it was a concern that we only found one eligible study that we were able to include.

And what of my colleague’s perspectives? Lead author Sarah Elliott, Consultant psychiatrist, writes:

“Working with Karen has been very rewarding and also fun. She has attended every single meeting and is always prepared… She has an eagle eye for things I would just not have spotted. Her great strength in attention to detail has meant that she has picked up an error I had made in quoting the findings of a study and I am really thankful for that.

Importantly, Karen has made me focus more on the impact of the review on those who might be reading it from a patient rather than from a professional perspective (or maybe both!). She has often picked up when a sentence might be ‘medically correct’ but which, because of the wording, might have an alarming effect on patients. As a result, the paper is much more sympathetically worded. Karen has also encouraged me to include references to the importance of client participation in setting research objectives and has made me aware of patient organisations that I was not aware of before – for example, ‘Autistica’, which is a charity which funds and campaigns for research to understand the causes of autism, improve diagnosis and develop evidence-based treatments. This is an organisation I will now be aware of when thinking of future research possibilities.”

Consumer involvement in research is vital

We participate not just to broaden researchers’ perspective, keep consumers’ needs in the spotlight, prevent waste or improve research, but because we have the right to be meaningfully involved in the decisions made about us.

How could we extend and build on experiences like mine, which have been overwhelmingly positive? There’s so much we could do to remove barriers to participation, improve diversity, inspire learning, record and analyse consumer impact and ensure research meets patients’ needs – and that’s just the start of it.

But I have concerns about some of the political ideologies and institutional models that might drag us backwards us now. How can we fight for a rights-based, democratic, empowering model of consumer involvement in health research?

I have valued being part of a process that is ethical, thorough, responsible and centred on human needs and relationships. I want consumers to remain at the heart of it, exercising genuine power and influence. We’re a family, not a factory.

Resources for building knowledge and skills

Join in the conversation on Twitter with @kmorley9 @Cochrane_CCMD and @CochraneUK or leave a comment on the blog.

Karen Morley has nothing to disclose.

I am a retired secondary school teacher, a Cochrane Consumer and a volunteer with the Cochrane Common Mental Disorders Review Group. I have contributed to the creation of Cochrane Evidence Essentials, to the CCMD Voice of Experience College, am an occasional blogger, have written consumer peer reviews - and I am a Cochrane author. I have lived experience of Obsessive Compulsive Disorder (contamination).

Becoming a Cochrane Review author: trust me, I’m a patient! by Karen Morley