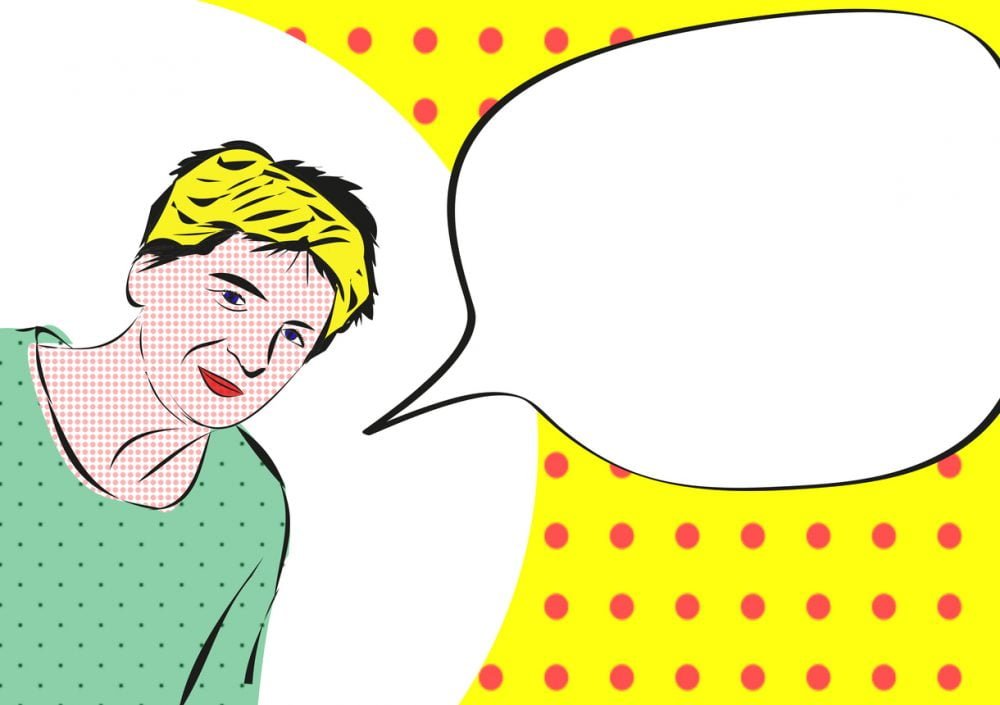 This blog summarises a conversation hosted on Twitter by Cochrane UK, inviting views on the use and misuse of language when talking about long-term conditions. 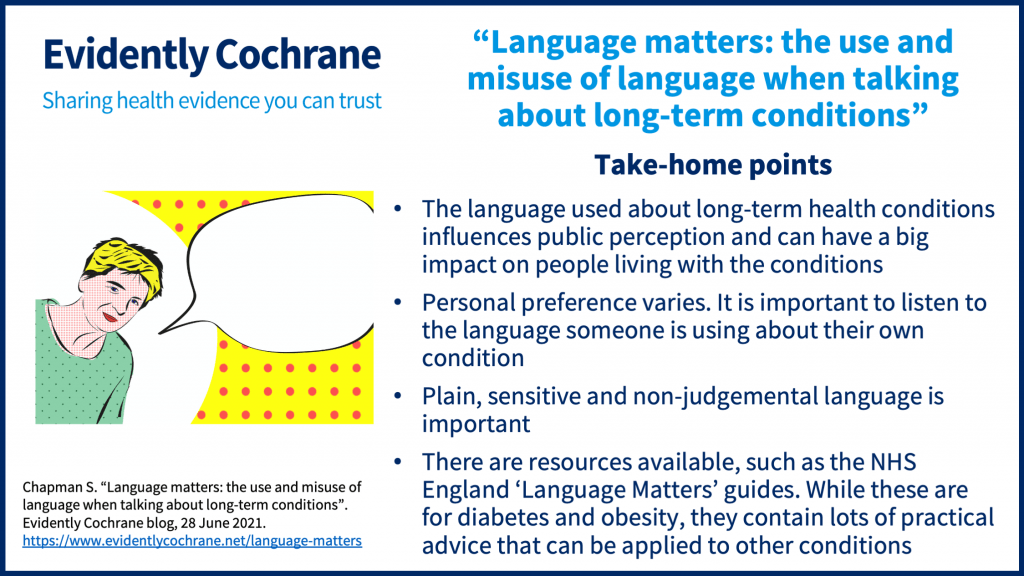 Following on from Anne Cooper and Bob Swindell’s blog The impact of language on people living with long-term conditions: having the rug pulled out from underneath you Cochrane UK hosted a tweetchat to discuss the language used to talk about long-term conditions, its impact, and alternatives to language that people find problematic. There are so many different aspects to this that we couldn’t hope to do more than scrape the surface of a few of them, but here are some of the points that were raised. Do feel free to add your own via the comments facility below the blog.

Using plain language is an important part of ensuring that information is communicated in ways that are easy to understand. The use of terminology can be confusing, especially when it is used differently by different people. Be prepared, if you’re a health professional, to speak plainly, even if that is to deliver bad news, but also mirror the language people use if possible.

Respect and reflect people’s choice of language about themselves

Someone described how health professionals sometimes reject the language she uses to talk about her mental health problems, often attempting to make it sound less serious. She said this makes her feel disbelieved, and that this behaviour, a refusal to use certain names and words, contributes to mental health stigma.

When a health professional (or anyone else) uses the language a person uses themselves about their health, this shows that they have listened, and it shows respect. Pertinent to this is the What Matters To You? initiative.

‘Non-compliant’ or ‘non-adherent’ were mentioned as judgemental and as revealing a perspective that is all about the practitioner rather than the patient. ‘Sufferer’ and ‘survivor’ were others. It would be interesting to hear more views on these last two, as I have also seen them used by people about themselves, but sense that the shift away from their use may be gathering momentum.

Language can apportion blame, such as asking someone with Diabetes “How well controlled are you?” or “have you been eating correctly?” @emmajdoble notes “I much prefer ‘how are you coping’ or ‘managing’. Or ‘that I am finding my diabetes challenging or difficult’. I feel this puts the blame on diabetes rather than me!” For Olivia @just_TUX, “I often get ‘what did you do to set off an asthma attack?’ but would prefer ‘do you know what triggered your asthma?’”

Some alternatives for language used in the context of personality disorder were suggested recently and what a different feel the alternatives have! ‘Survival strategies’ instead of ‘acting out’ and ‘attention needing’ rather than ‘attention seeking’, among others.

This reframing is important and it’s one of the key principles of the @NHSEngland ‘Language Matters’ guide: “Avoid language which attributes responsibility (or blame) to a person for the development of their diabetes or its consequences”. This could easily be adapted for other conditions, of course.

@Anniecoops noted that “When we developed #LanguageMatters we discovered the importance of neutral and factual labelling, choice, and positive motivating language. but for me always #PersonFirst too.”

It’s not just about alternative terms. “Specific language alternatives don’t interest me. A reduction in direct or inferred blame, telling off patients and scare tactics are important to me.” @DiabeticDadUK

This was mentioned in the context of talking about suicide and is so very important. The Samaritans have this guidance on how to talk about suicide safely online.

This is also about sensitivity and thinking about the possible impact of your words. @Claire_F1att shared this: “I actually had a nurse ring me when I was diagnosed and she left a voicemail message saying she was a palliative care nurse… I wasn’t palliative and found the use of that word traumatising. I didn’t seek support from her… as a nurse & as a rational person I am/was aware palliative doesn’t mean dying but as a patient I found the word quite distressing.”

The language of war

Dislike of the language of war and battles was raised here and this aspect of language use on its own could fill a tweetchat and much more. Indeed, a great deal has been said elsewhere about these military metaphors that have been used for centuries and that we still see so often, especially in relation to cancer (‘beating cancer’, ‘lost their brave fight against cancer’ etc), with all that implies about efforts by the person with the illness to ‘win the battle’ – or not…

“I’m not fighting cancer and I’m not a “warrior” either, I’m just “dealing with cancer” each day at a time. I’m not at war with my own body. Yes, a few bits don’t work as they should but it’s still pretty amazing so I’ll work with it, not against it.” @FionaMartin123

“I know I haven’t ‘beaten’ cancer, I haven’t ‘fought’ it either. But I have lived as effectively, thoroughly and wholly, as I can.” @therapy2optimum

“There is a lot of war language used with chronic illness, which isn’t always helpful- brave, fighting, beating illness- and then losing the fight… it can add to a sense of blame- didn’t fight hard enough etc.” @sarah16107480

The blog Battling, brave or victim: why the language of cancer matters reminds us that people’s preferences vary, a recurring theme in this chat.

The naming of health conditions – time for a rethink?

It’s time to rephrase Heart Failure, suggested one person, when this a normal process as we age, unless brought on prematurely. They also told us about a call to rethink how doctors talk to some people with reduced kidney health, replacing the term ‘Chronic Kidney Disease’ with different bands of kidney age.

I am aware that the territory of language around deafness (Deaf, deaf, hard of hearing, hearing loss, and more) can be difficult to navigate. People have different preferences – and often strong feelings about it.

Labelling and lumping together

Being labelled by a health condition can be unwelcome. @Anniecoops says she hated being called a Diabetic (or one of ‘The Diabetics in the waiting area’) and prefers ‘Anne who has Diabetes’. A label might mean that they look at the diagnosis before the person. But it should be driven by choice. As the Language Matters: Language and Diabetes document says: “it is up to the person concerned as to how they would like to be addressed, supported and understood but as healthcare professionals, we need to be aware of the need to give them that choice, not make it for them.”

The language (and images) used by the media

Influencing the media in how they portray and speak about people with Diabetes was one of the aims of the Language Matters publication. Of course, public perceptions, attitudes and language are influenced by the language used by the media, and the images used too. Poor choices of words and images can give a negative impression of a health condition and the people who have it and contribute to stigma and stereotyping.

There is much that is common to the use of language across different health conditions, but some helpful condition-specific resources were mentioned during the conversation. Also, speaking to patients about how they think of their condition, what words they use, can be really helpful.

Read the rest of the blogs in our ‘Living with Long-Term Conditions’ series.

Language matters: the use and misuse of language when talking about long-term conditions by Sarah Chapman